“It’s almost like the Explore Tab that we have on Instagram,” said Facebook CEO Mark Zuckerberg in leaked audio of him describing TikTok during an all-hands meeting. But it’s not. TikTok represents a new form of social entertainment that’s vastly different from the lifelogging of Instagram where you can just take a selfie, show something pretty or pan around what you’re up to. TikToks are premeditated, storyboarded and vastly different than the haphazard Stories on Insta.

That’s why Zuckerberg’s comments cast a dark shadow over the future of the Facebook family of apps. How can it beat what it doesn’t understand? He certainly can’t ignore it. Facebook’s copycat Lasso has been installed just 425,000 times since it launched in November, while TikTok has 640 million installs in the same period outside of China. Oh, and TikTok has 1.4 billion total installs beyond China to date. 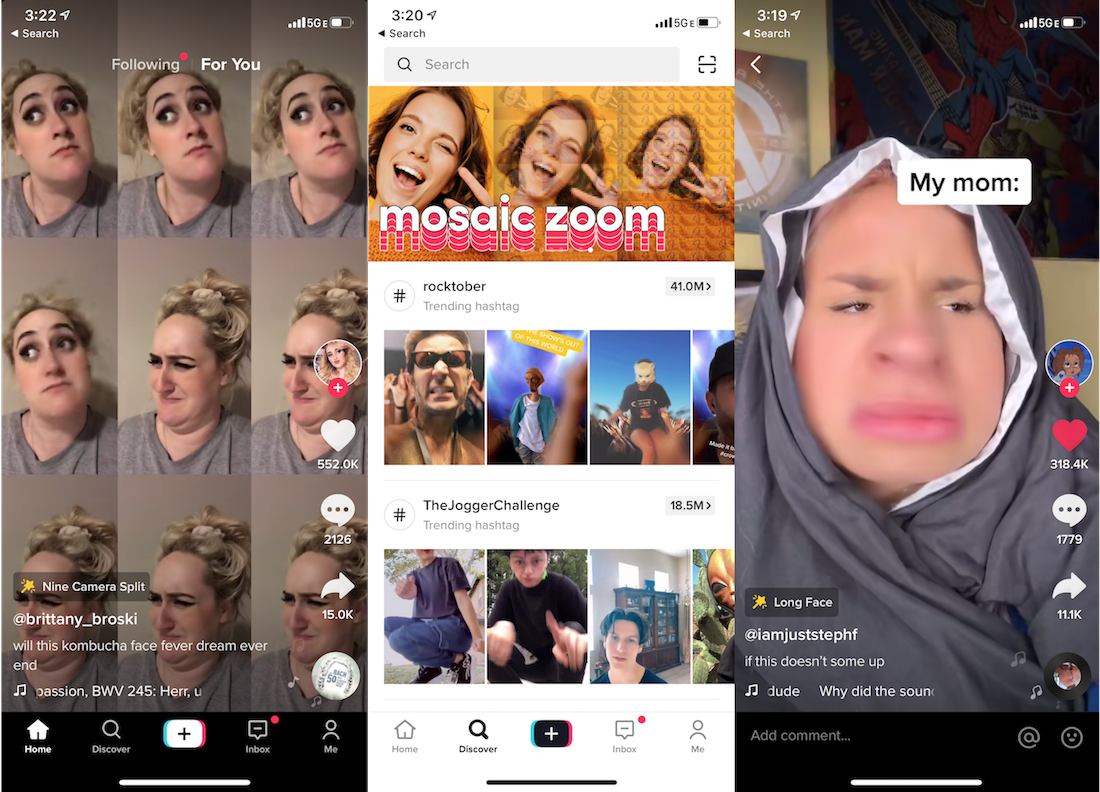 Casey Newton of The Verge today published two hours of audio and transcripts from two internal-only all-hands Q&As held by Zuckerberg at Facebook in July. His comments touch on the company’s plan to fight being broken up by regulators, especially if Elizabeth Warren becomes president. He thinks Facebook would win, but on resorting to suing the government, he says “does that still suck for us? Yeah.” Zuckerberg also describes how Facebook is working to launch a payments product in Mexico and elsewhere by year’s end as Libra deals with regulatory scrutiny.

But beyond his comments on regulation, it’s his pigeonholing of TikTok that’s most alarming. It foreshadows Facebook failing to win one of the core social feeds that its business depends on. Perhaps his perspective on the competitor is evolving, but the leak portrays him as thinking TikTok is just the next Snapchat Stories to destroy.

Here’s what Zuckerberg said about TikTok during the internal Q&A sessions, (emphasis mine):

So yeah. I mean, TikTok is doing well. One of the things that’s especially notable about TikTok is, for a while, the internet landscape was kind of a bunch of internet companies that were primarily American companies. And then there was this parallel universe of Chinese companies that pretty much only were offering their services in China. And we had Tencent who was trying to spread some of their services into Southeast Asia. Alibaba has spread a bunch of their payment services to Southeast Asia. Broadly, in terms of global expansion, that had been pretty limited, and TikTok, which is built by this company Beijing ByteDance, is really the first consumer internet product built by one of the Chinese tech giants that is doing quite well around the world. It’s starting to do well in the US, especially with young folks. It’s growing really quickly in India. I think it’s past Instagram now in India in terms of scale. So yeah, it’s a very interesting phenomenon.

And the way that we kind of think about it is: it’s married short-form, immersive video with browse. So it’s almost like the Explore Tab that we have on Instagram, which is today primarily about feed posts and highlighting different feed posts. I kind of think about TikTok as if it were Explore for stories, and that were the whole app. And then you had creators who were specifically working on making that stuff. So we have a number of approaches that we’re going to take towards this, and we have a product called Lasso that’s a standalone app that we’re working on, trying to get product-market fit in countries like Mexico, is I think one of the first initial ones. We’re trying to first see if we can get it to work in countries where TikTok is not already big before we go and compete with TikTok in countries where they are big.

We’re taking a number of approaches with Instagram, including making it so that Explore is more focused on stories, which is increasingly becoming the primary way that people consume content on Instagram, as well as a couple of other things there. But yeah, I think that it’s not only one of the more interesting new phenomena and products that are growing. But in terms of the geopolitical implications of what they’re doing, I think it is quite interesting. I think we have time to learn and understand and get ahead of the trend. It is growing, but they’re spending a huge amount of money promoting it. What we’ve found is that their retention is actually not that strong after they stop advertising. So the space is still fairly nascent, and there’s time for us to kind of figure out what we want to do here. But I think this is a real thing. It’s good.

To Zuckerberg’s credit, he’s not dismissing the threat. He knows TikTok is popular. He knows it’s growing in key international markets Facebook and Instagram depend on to keep user counts rising. And he knows his company needs to respond via its standalone clone Lasso and more. 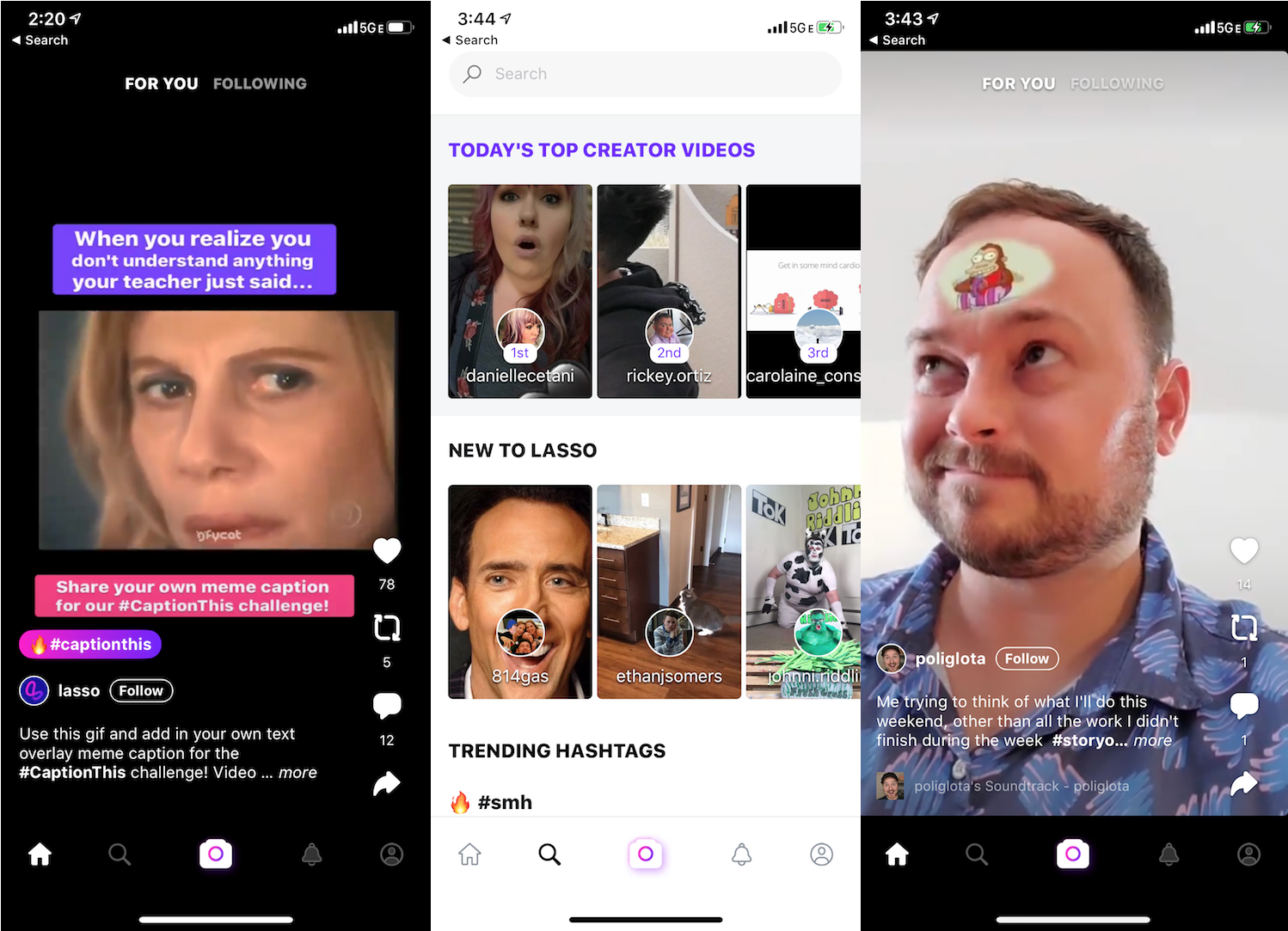 To crystallize why, let’s rewind to Snapchat. With the launch of Stories, it started to blow up with U.S. teens. Facebook’s attempts to clone it in standalone apps like Poke and Slingshot never gained traction. In fact, none of Facebook’s standalone apps have succeeded unless they splintered off an already popular piece of Facebook, like chat and users were forced to download them like Messenger. It wasn’t until Zuckerberg stuck his clone of Stories front-and-center atop Instagram and Facebook that Snapchat’s user count went from growing 18% per quarter to shrinking. There, Facebook used the same strategy laid out in Zuckerberg’s comments — push its good-enough clone in countries where the original isn’t popular yet.

But Facebook was fortunate because Stories really wasn’t that dissimilar to the content users were already sharing on Instagram — tiny biographical snippets of their lives. Snapchat CEO Evan Spiegel had originally invented Stories as a vision of Facebook’s News Feed through the lens of an ephemeral camera. All users had to know was “I take the same videos, but shorter and sillier, posted more often and then they disappear.” The concept of Instagram and Facebook didn’t have to change. They were still about telling friends what you were up to. Choking off TikTok’s growth will be much more complicated.

The rise of social entertainment…not media

TikTok isn’t about you or what you’re doing. It’s about entertaining your audience. It’s not spontaneous chronicling of your real life. It’s about inventing characters, dressing up as someone else and acting out jokes. It’s not about privacy and friends, but strutting on the world stage. And it’s not about originality — the heart of Instagram. TikTok is about remixing culture — taking the audio from someone else’s clip and reimagining the gag in a new context by layering it atop a video you record. 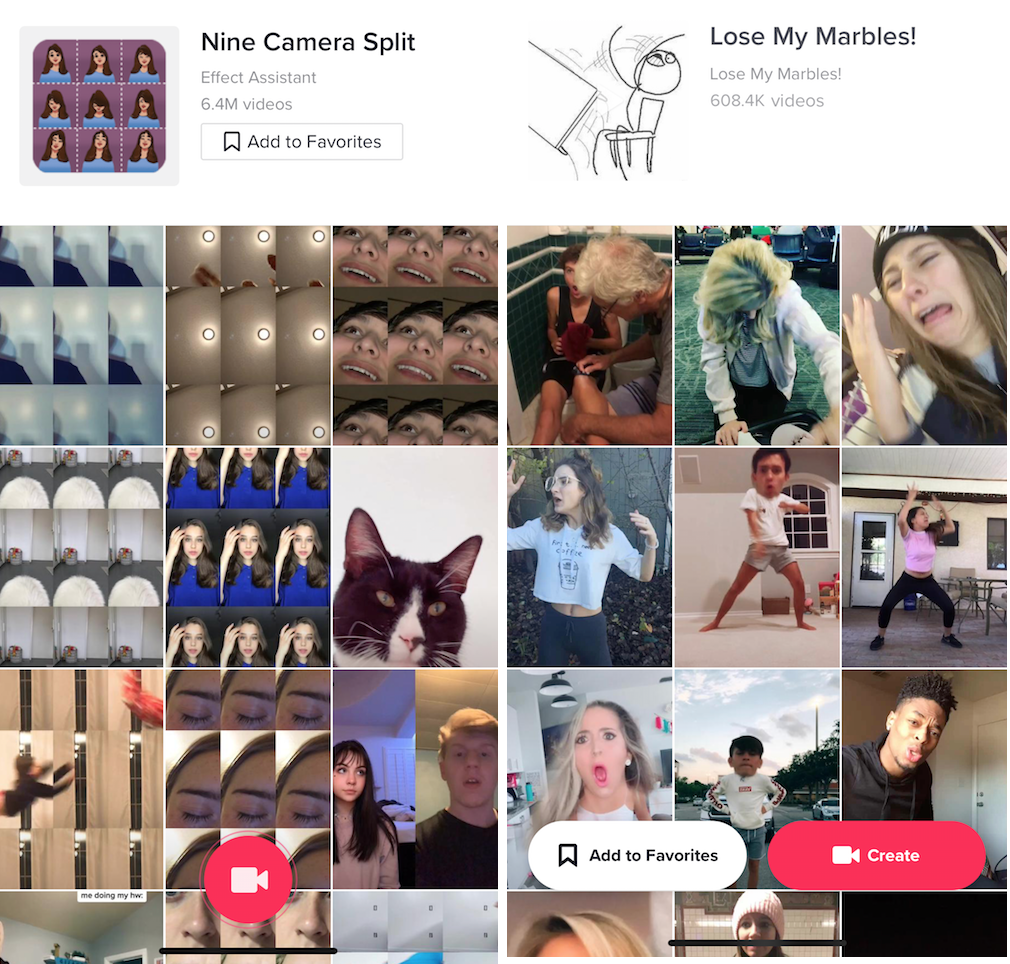 That makes TikTok distinct enough that it will be very difficult to shoehorn into Instagram or Facebook, even if they add the remixing functionality. Most videos on those apps aren’t designed to be templates for memes like TikToks are. Insta and Facebook’s social graphs are rooted in friendship and augmented by the beautiful and famous, but don’t encompass the new wave of amateur performers TikTok elevates. And since each post to the app becomes fodder for someone else’s creativity, a competitor starting from scratch doesn’t offer much to remix.

That means a TikTok clone would have to be somewhat buried in Instagram or Facebook, rebuild a new social graph and retrain users’ understanding of these apps’ purpose…at the risk of distracting from their core use cases. This leaves Facebook hoping to grow its standalone TikTok clone Lasso, which TechCrunch scooped a year ago before it launched last November. But as we’ve seen, Facebook struggles growing brand new apps, and that effort is further hindered by its increasingly toxic brand and sheen of uncoolness. Nor does it help that Facebook must divert development resources to comply with all the new privacy and transparency obligations as part of its $5 billion FTC fine and settlement.

Facebook’s best bet is to assess the future value of the ads it could run on a successful TikTok clone and apply some greater fraction of that grand sum to competing directly. It’s already made some smart additions to Lasso, like tutorials for how to remix and the option to add GIFs as sections of your video. But it’s still failing to gain serious traction in the U.S. While typical videos on the TikTok homepage where I’m spending a few hours a week have hundreds of thousands of Likes, the top ones I saw in my Lasso feed today received 70 or fewer. 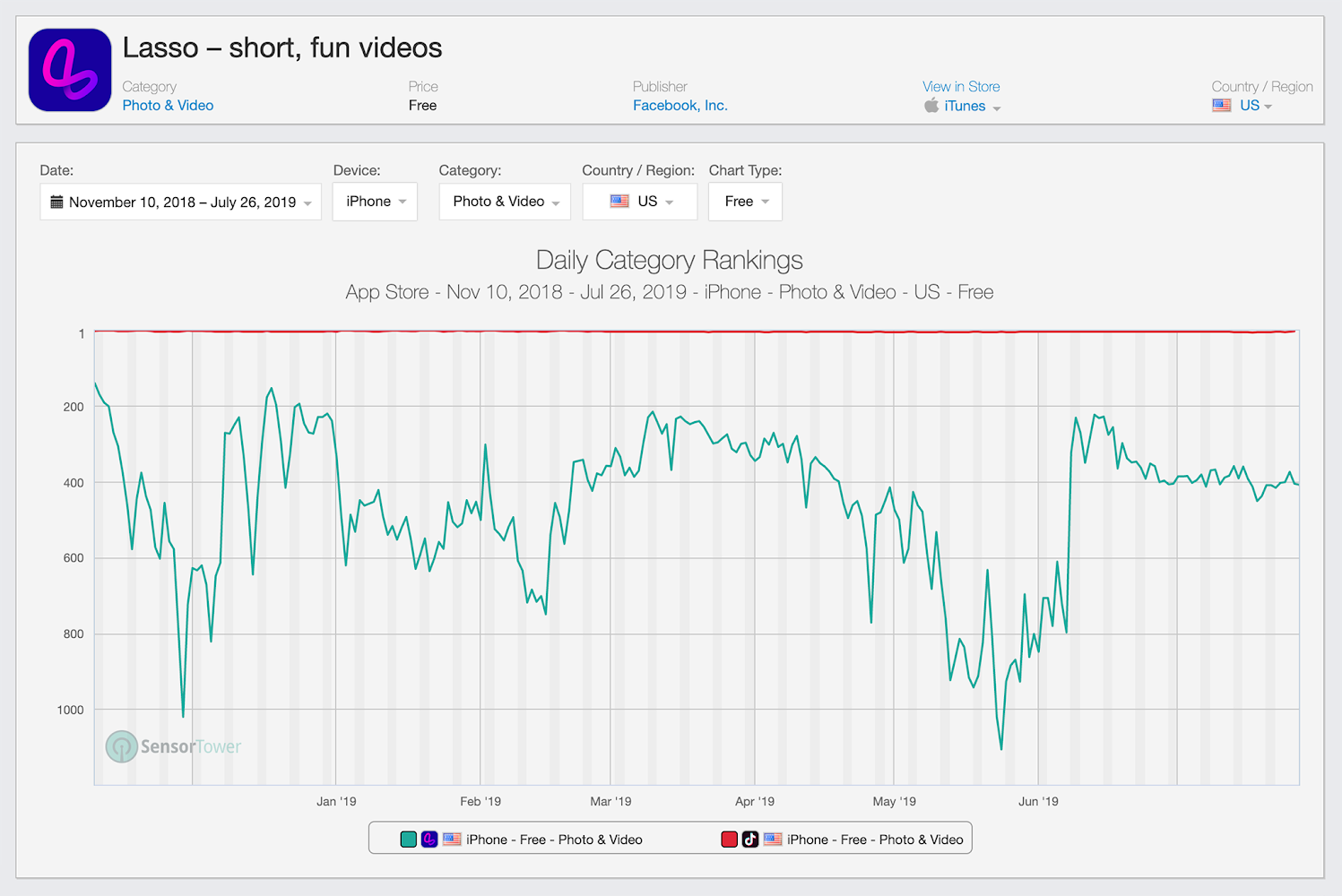 I had Sensor Tower run some analysis comparing TikTok with Lasso since its launch last November, and found that Lasso gets six downloads for every 1,000 for TikTok in the US. Some more stats:

Beyond the U.S., Lasso has only launched in one other market, Mexico in April, where it’s been faring better but could hardly even be considered a competitor to TikTok. Facebook needs to lean harder into Lasso:

Zuckerberg may need to find a coherent place for TikTok-style features inside Instagram and potentially Facebook. That could be another horizontal row of previews like with Stories and/or a header on the Explore page dedicated to premeditated content. Certainly something more prominent than a single button like IGTV that still no one is requesting. One opportunity to best TikTok would be building a dedicated remix source browser into the Stories camera to help users find content to put their own spin on.

Facebook will also need to buy out top TikTok creators to make videos for it instead, and even quasi-hire some of the most prolific video meme or challenge inventors to give users trends to jump on rather than just one-off clips to watch. Its failure to offer IGTV stars monetization has led many to ignore that platform, and it can’t afford that again.

If Zuckerberg approaches TikTok as merely an algorithmic video recommender like Explore, Facebook will miss out on owning the social entertainment feed. If he doesn’t decisively move to challenge TikTok soon, its catalog of content to remix will grow insurmountable and it will own the whole concept of short-form performative video. Snapchat’s insistence on ephemerality makes it incompatible with remixing, and YouTube isn’t nimble enough to reinvent itself.

If no American company can step up, we could see our interest data, faces and attention forfeited to an app that while delightful to use, heralds Chinese political values at odds with our own. If only Twitter hadn’t killed Vine.