Founder Andreas Kröpfl has spent almost a decade hard-grafting in the b2b unified communications space, building a videoconferencing business with a patented single-stream system and a claim of no ‘drop-offs’ thanks to “unique low-bandwidth technology”.

His Austria-based startup’s current web-based videoconferencing system, eyeson (née Visocon), which launched in 2018, has had some nice traction since launch, as he tells it, garnering a few million customers and getting a nomination nod as a Gartner Cool Vendor last year.

Eyeson’s website touts ‘no hassle, no, lag, no downloads’ video calls. Pricing options for the target b2b users run the gamut from freelance pro to full-blown enterprise. While the business itself has pulled in a smidge less than $7M in investor funding over the years.

But when TechCrunch came across Kröpfl last December, pitching hard in startup alley at Disrupt Berlin, he was most keen to talk about something else entirely: Video dating.

That’s because last summer the team decided to branch out by building their own video dating app, reusing their core streaming tech for a consumer-focused social experiment. And after a period of internal beta testing — which hopefully wasn’t too awkward within a small (up-til-then) b2b-focused team — they launched an experimental dating app in November in India.

This is where he breaks into a giggle. The traction has been crazy, he says.

In the staid world of business videoconferencing you can imagine eyeson’s team eyeing the booming growth of certain consumer-focused video products rather enviously.

Per Kröpfl, they had certainly noticed different desires among their existing users — which pushed them to experiment. “We saw that private people like the simple fun features (GIF reactions, …) and that business meetings were more focused on ‘drop-off’ [rates] and business features,” he tells us. “To improve both in one product was not working any more. So eyeson goes business plus SaaS.”

“Cloning eyeson but make it social,” is how he sums up the experiment.

Ahoi is very evidently an MVP at this stage. It also looks like a pretty brave and/or foolish (depending on your view) full-bore plunge into video dating, with nothing so sophisticated as a privacy screen to prevent any, er, unwanted blushes… (Whereas safety screening is an element we’ve recently seen elsewhere in the category — see: Blindlee.)

There’s also seemingly no way for users to specify the gender they wish to talk to.

Instead, Ahoi users state interests by selecting emoji stickers — such as a car, cat, tennis racket, games console or globetrotter. And, well, it goes without saying that even if you like cars a lot you’re unlikely to change your sexual orientation over the category.

There are no generic emoji that could be used to specify a sexual interest in men or women. But, er, there’s a horse…

Such limits may explain why Ahoi is generating so many early swipes — and rather fewer actual calls — in that the activity sums to (mostly) men looking for women to videochat with and being matched with, er, men.

And frustration, sexual or otherwise, probably isn’t the greatest service to try and sell.

“People are disappointed by perfect profiles on Tinder and the reality when meeting people,” he posits. “Wasted time. Especially women do not want to be stalked by men pretending to be someone else. We solve both by a real live conversation where only after a call both can decide to be connected or never see each other again.”

Notably, marketing around the app does talk rather fuzzily about it being a way to “find new pals”.

So while Kröpfl frames the experiment as dating, the reality of the product is more ‘open to options’. Think of it as a bit like Chatroulette — just with slightly more control (in that you have a few seconds to decide if you don’t want to talk to the next in-app match).

The very short countdown timer (you get just five seconds to opt out of a matched video chat) is very likely generating a fair number of unintended calls. Though such high velocity matching might appeal to a certain kind of speed dating addict.

Kröpfl says Ahoi has been seeing up to 20,000 new users added daily. They’re bullishly targeting 3M+ users this year, and already toying with ideas for turning video dates into a money spinner by offering stuff like premium subscriptions and/or video ads. He says the plan is to turn Ahoi into a business “step by step”.

“Everyone loves to make his profile better,” he suggests, floating monetization options down the line. Quality filtering for a fee is another possibility (“everyone is annoyed by being connected to the wrong people”).

They picked India for the test launch because it has a lot of people on the same timezone, a large active mobile user-base and cheap marketing is still “easily possible”. He also says that dating apps seemed popular there, in their experience. (Albeit, the team presumably didn’t have a great deal of relevant experience in this category — given Ahoi is an experiment.)

The intent is also to open Ahoi up to other markets in time too, once they get more accustomed to dealing with all the traffic. Kröpfl notes they had to briefly take the app off the store last month, as they worked on adding more server capability.

“It is very early and we were not prepared for this usage,” he says, admitting they’ve been “struggling to work on early feedbacks”. “We had to make it invisible temporarily — to improve server capacity and stability.”

The contrast in pace of uptake between the stolid (but revenue-generating) world of business meeting-fuelled videoconferencing and catnip consumer dating — which is money-sucking unless or until you can hit a critical mass of usage and get the chance to try applying monetization strategies — does sound like it’s been rather irresistible to Kröpfl.

Asked what it feels like to go from one category to the other he says “crazy, surprised and thrilling”, adding: “It is somehow also frustrating when all the intense b2b work is not as closely interesting to people as Ahoi is. But amazing that it is possible thanks to an extremely focused and experienced team. I love it.”

TechCrunch’s Manish Singh agreed to brave the local video dating app waters in India to check Ahoi out for us.

He reported back not having seen any women using the app. Which we imagine might be a problem for Ahoi’s longer term prospects — at least in that market.

“I spoke with one guy, who said his friend told him about the app. He said he joined to talk to girls but so far, he is only getting matched with boys,” said Singh. “I saw several names appear on the app, but all of them were boys, too.”

He told us he was left wondering “why people are on these apps, and why they have so much free time on a weekday”.

For ‘people’ it seems safe to conclude that most of Ahoi’s early adopters are men. As the Wall Street Journal reported back in 2018, India’s women are famously cool on dating apps — in that they’re mostly not on them. (We asked Kröpfl about Ahoi’s gender breakdown but he didn’t immediately get back to us on that. Update: We’re told the app’s male to female ratio is 85:15. “India is challenging,” Kröpfl admits.)

That market quirk means those female users who are on dating apps tend to get bombarded with messages from all the lonely heart guys with not much to swipe. Which, in turn, could make a video dating app like Ahoi an unattractive prospect to female users — if there’s any risk at all of being inundated with video chats.

And even if there are enough in-app controls to prevent unwelcome inundation by default, women also might not feel like they want their profile to be seen by scores of men simply by merit of being signed up to an app — as seems inevitable if the gender balance is so skewed.

Add to that, if the local perception among single women is that men on dating apps are generally a turn-off — because they’re too eager/forward — then jumping into any unmoderated video chat is probably not the kind of safe space these women are looking for.

No matter, Kröpfl and his team are clearly having far too much fun growth hacking in an unfamiliar, high velocity consumer category to sweat the detail.

Notably, there are a lot of reviews of Ahoi on Google Play already — an unusual amount for such an early app. Many of them appear to be five star write-ups from accounts with European-sounding names and a sometimes robotic grasp of language.

“Eventhough Ahoi has been developed recently, it had high quality for user about calling, making friends and widing your knowlegde [sic],” writes one reviewer with atrocious spelling whose account is attached to the name ‘Dustin Stephens.’

“Talking with like minded people and same favor will creat a fun and interesting atmosphere. Ahoi will manage for you to call like condition above,” says another apparently happy but not entirely clear user, going by the name ‘Elisa Herring’.

There’s also a ‘Madeleine Mcghin’, whose profile uses a photo of the similarly named child who infamously disappeared during a holiday in Portugal in 2007. “My experience with this app was awesome,” this individual writes. “It gives me the option to find new people in every country.”

Another less instantly tasteless five-star reviewer, ‘Stefania Lucchini’, leaves a more surreal form of praise. “A good app and it will bring you extra income, I would say it’s a great opportunity to have AHOI and be a part of it but it’s that it will automatically ban you even if you don’t show it. Marketing. body part, there are still 5 stars for me,” she (or, well, ‘it’) writes.

Among the plethora of dubious five-star reviews a couple of one-star dunks stand out — not least because they come from accounts with names that sound like they might actually come from India. “Waste u r time,” says one of these, who uses the name Prajal Pradhan.

This pithy drop-kick has been given a full 72 thumbs-up by other Play Store users. 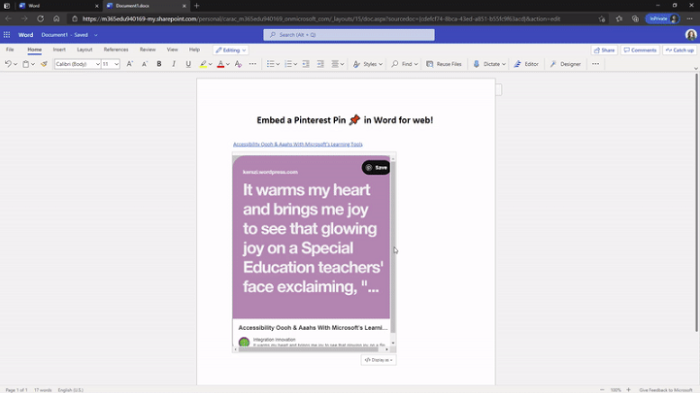 You Can Now Embed Pinterest Pins in Microsoft Word and OneNote. If You Want.

New Report Looks at the Rising Influence of Online Communities

Core Web Vitals Challenge: WordPress vs Everyone via @martinibuster

Facebook Rolls Out Shops to Businesses in the UK and Canada