With messaging use on the rise during the COVID-19 lockdowns, Facebook now appears to be looking for more ways to prompt direct engagement between users. 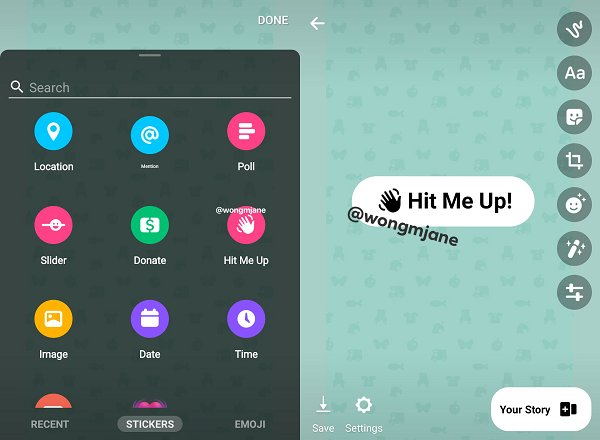 As you can see in this example, shared by reverse engineering expert Jane Manchun Wong, the new ‘hit Me Up’ sticker would enable Facebook Stories users to prompt a quick DM response via the sticker, which could help to facilitate more intimate engagement, which, as noted, would align with the rising use of Stories and messaging, particularly during the lockdowns.

Indeed, according to Facebook, messaging activity across both WhatsApp and Messenger has increased some 50% on normal levels over the last few months. Without the capacity to connect in real life, people are looking to direct connection options to stay in touch, and a new prompt within Stories to further facilitate such engagement could be a good way to generate increased conversation, and give people more ways to stay connected while apart.

That’s likely the main impetus here – seeing the increases in messaging, it may well be that more people are looking to have more message interactions, but they need to know who else might be interested in the same. By adding a simple prompt within your story, highlighting that you’re interested in chatting, it could spark new message interactions, and help to relieve some of the loneliness of the social isolation period.

But of course, it could also lead to problems. As we noted on the Instagram ‘DM Me’ option, while people might want to get more private messages in response to their Stories, it could also open the door to more unsolicited attachments and the like, which has become a problematic element, particularly for younger users. Users would, however, still be able to limit who sees their Stories, and block unwanted responders, but broadening your call for more messages could be problematic in some cases.

Still, it makes sense, and the numbers would suggest it could be a good option.

Given the current focus on direct engagement tools, it seems likely that we’ll see these options roll out sooner, rather than later. And from a brand and marketing perspective, that could also mean that you’ll soon have another CTA prompt to help advance connection with potential clients.