There’s a lot of stressful information to process right now, with various, significant events taking up a significant portion of our mind space at different times.

At a broad level, we’re dealing with the COVID-19 pandemic, the response to that pandemic, the politicization of that response, and key decisions that have to be made about school and work. In addition to this, we’re also facing tough questions about the inequalities, and disparities between groups in this country, then the subsequent protests caused by those inequalities and disparities. And then, adding another layer top of that, there’s an election coming up which looks set to be divisive and contentious.

And this is before you consider more personal, day-to-day stresses and impacts that each person is facing along the way.

It’s a lot, and a lot of the discussion about such is happening on social media platforms. And as you likely already know, these discussions can add to your stress levels, which is not always healthy.

Signs social media is stressing you out

Here are some signs that social media interaction may be stressing you out:

There are plenty of articles out there about how stress manifests itself on social media, but I didn’t research any of them. I’ve seen all of these behaviors in myself and my online friends over the last months, and it’s getting worse.

Have you seen this type of behavior?

What I have researched before, and what you may not know about, is that there is a far more dangerous aspect to social media-related stress.

A good post by Helpguide.org lists it as a vicious cycle: 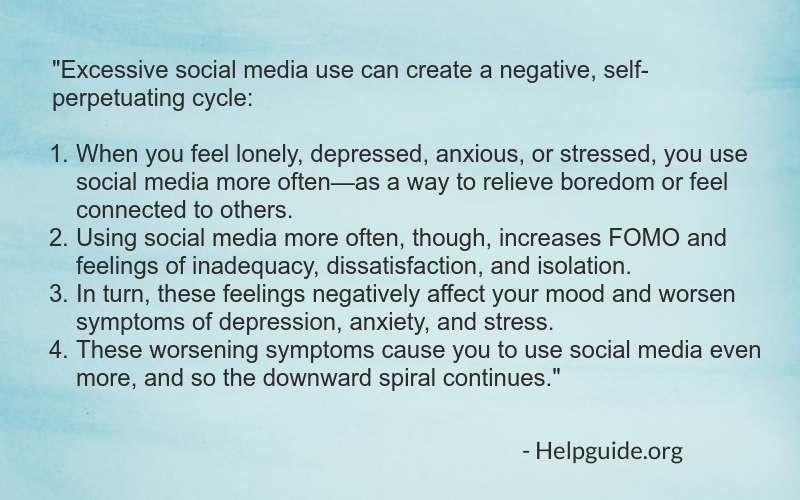 We’re all in a stressful time with everything that’s happening right now. At this point, many of us are isolated due to stay at home orders and social distancing, so we’re turning more and more to social media to stay in touch.

As the cycle above shows, that might be more hurtful than helpful.

Beware the “echo chamber” but focus on your health

We, largely unconsciously, tend to put ourselves in “echo chambers” on social media by friending, following, and interacting with like-minded people.

This has been a problem for years, and came to a head around the 2016 election as this post points out. I always recommend looking at other viewpoints, and doing so via reputable news sources, rather than social media, but if those opposing viewpoints are increasing the stress, anxiety, and anger in your life, it might be time to focus on your health.

Social media interaction doesn’t need to be an “all or nothing” proposition, and there are different degrees of actions you can take to reduce the negatives of social media.

You can try each of these to see if, and how much they help:

There are two key points I’d like you to take away from this:

If you unfollow someone, stop participating, or do a detox, some of your friends may be mean about it, call you a baby, say you can’t handle it, or even claim victory for their point of view in an effort to bait you back in.

If the house is on fire, you get out of the house. There’s no shame in it. Also, people who do those things are the ones you should unfriend.

The other key point:

Encouraging humanity in the digital world

The following is based on a session at INBOUND17 that resonated the most with me. It was by Brene Brown and it, in my opinion, is worth considering more today than it was then.

My wife warned me that Brene had a reputation for laying down the truth in a way that makes you think, and she did just that. She discussed the trends we’ve all seen on social media networks, including the “echo chamber” effect where people surround themselves with like-minded thinkers, which leads to intolerance towards anyone with a different opinion. She shared statistics about how people today feel more alone despite how connected we are.

Then she shared this key point.

Brene and her family live in Houston, and they had been caught up in the floods caused by Hurricane Harvey. Brene showed pictures of the Cajun Navy that helped rescue the people in her neighborhood, she showed a picture of her husband making his way through the waist-deep water to get an elderly neighbor and her two dogs out of her house to safety.

Brene’s key point in this:

“No one asked anyone who they voted for, they asked how they could help.”

The true connection of the human spirit. Our humanity.

Unfortunately, practicing our humanity is not the trend in the digital world. The problems described above are the trend. We have all, every one of us, contributed to it. It’s time we stopped being part of the problem, and in every digital interaction, no matter how small, nor how upset we are, seek out our better selves.

It’s there. I have many friends on social media who I ardently disagree with. I also know that if I put out a genuine plea for help, they would show up. Our better selves are there, it shouldn’t take a disaster for us to show it.

We should strive to show it every day, and in every online interaction.