Home GOOGLE A visual guide for every Google Ads extension 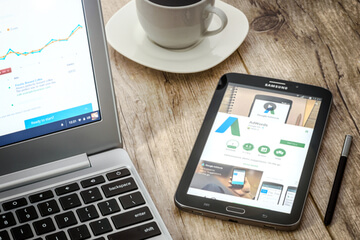 Sitelinks, the first Google ad extension, was introduced in 2009. They enabled advertisers to expand the total size of their text ads while also providing additional links to the advertiser’s website.

In the ten years that followed these original ad extensions, Google rolled out an additional ten manual and automated extensions and two automated-only extensions.

Manual extensions require that advertisers set them up within Google Ads before they can show up in the actual ad.

Automated extensions require no set up on the advertiser’s part – Google Ads these automatically based on system predictions of performance.

Since ad extensions only appear beneath the main body of the ad at Google’s discretion, there’s no easy way to preview an ad with the extensions included, thus it’s challenging for Google Ads managers and agencies to explain to clients what their actual ad might look like to searchers.

This inspired me to create an in-depth, fully illustrated guide of Google’s ad extensions.

What follows is a summary of this guide which includes samples of the top four ad extensions and how they appear on either mobile or desktop devices. The full guide is available here.

The importance of ad extensions

Google’s data shows that ad extensions increase CTR by as much as 15%, though, in my experience, it can often be much higher than this.

Extensionless ads are smaller and take up less space, so they tend to get fewer clicks.

The ad on the left is what the ad preview looks like in Google’s desktop ad editor. There’s no easy way to view the ad as it might appear with extensions, as shown on the right. When looking at the ads side-by-side, the ad on the right is larger and contains more information about the business, including the street address and phone number for mobile users.

Not every ad extension is appropriate for every advertiser. Shopping extensions, for example, can only be used to showcase products on ecommerce websites while App extensions are only appropriate for businesses who have a mobile app they want to sell or promote.

However, there are four ad extensions that are appropriate for most businesses and should absolutely be leveraged to add more information to your ads and expand the ad’s overall size. They are:

The original ad extension, sitelinks are a powerful way to add more links to your ads. Each sitelink can contain up to 25 characters in the link text plus a two-line description totaling 140 characters per link. As with most ad extensions, Google selects which sitelinks and how many will appear with each ad and will show two to six sitelinks per ad.

Callouts are short snippets of text that can be up to 25 characters. They can be used to highlight business selling points and features (for example, “Open 24 Hours”). They appear directly beneath the ad description and above the sitelinks.

Google shows two to six callout extensions per ad, though the specific number of callouts varies based on what Google feels are the most relevant (and likely to get clicked on) callouts.

A structured snippet is basically a list of products, services, or other elements that help define a company’s offerings more clearly to consumers. There are thirteen different types of structured snippets, some of which are only appropriate for specific businesses. For example, “neighborhoods” for local businesses or real estate, and “degree programs” for schools.

The above extensions are easy to create in the Google Ads interface or using the Google Ads Editor, a free desktop tool that allows advertisers to easily create and manage Google Ads accounts offline from a computer.

The complete illustrated guide to Google Ads extensions contains many more visual examples of automated and manual ad extensions (including some of the more obscure extensions). It can help provide some clarity behind how the different extensions look on both mobile and desktop devices.