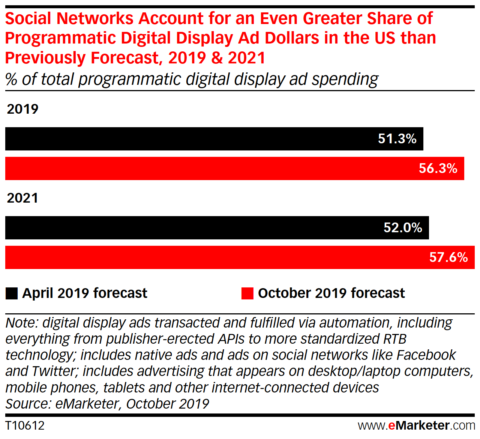 Social networks will account for a greater share of programmatic digital display ad dollars in 2019 than originally expected.

According to a new report from eMarketer, estimates for social as a portion of total programmatic are up compared to what was forecasted in April 2019.

“Since our April 2019 forecast, we’ve increased our estimates for social as a portion of total programmatic thanks to stronger-than-expected performance from social networks, such as Facebook, Twitter and Snapchat, and ongoing expectations that advertisers will continue to seek out social networks and other walled gardens over the next 24 months.” Lauren Fisher, principal analyst at eMarketer, attributes the strong performance to the scale and identity capabilities of social media sites. This is mattering more to advertisers as privacy restrictions make it harder to track, target, and gather data from users.

“Advertising in a cookie-free mobile app environment where users spend much of their digital time is complicated and difficult. Social networks prove to be the major exception. They’ve made it relatively easy to target audiences at scale in an in-app environment.”

Advertisement
Related Topics:NewsSocial Media
Up Next

Google Ads to show performance insights from the bid strategy