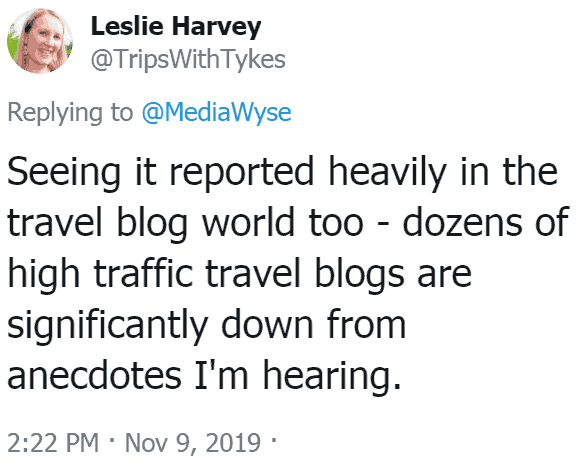 There is substantial evidence that an unannounced Google Update is underway. This update has been affecting sites across a wide range of niches. Most of the feedback is negative although there are winners mixed in, including winners in the spam community.

Impact Felt Across Many Industries

Forensic SEO expert Alan Bleiweiss (@AlanBleiweiss) noted in a tweet how this update affected a plurality of industries. He tweeted:

Note: The double listing for travel sites is not a typo. It’s a reference to two travel sites.

Google does not target specific niches. The recipe blogger niche is a highly organized community. Because of that when something big happens the community’s voice will be amplified.

Thus it was that the recipe blogger community noticed this update. As of earlier today there was a growing list of 47 recipe blogs that had reported losses from this update.

Casey Markee of MediaWyse (@MediaWyse) who specializes in food blog SEO said this about those 47 sites that were suffering from Google’s November 2019 update:

“All of them, big sites, small sites, medium sites, all are showing like 30%+ drops. I know it’s tough on bloggers to see drops and thing “OMG I need to make some dramatic changes.”

But that’s like throwing darts at a board, blindfolded, in the dark, while underwater. Definitely need to WAIT for more data and until this “update” (or whatever it is) has fully rolled-out.”

I agree, it’s best to wait to hear what Google says about this update. I took a quick look at two of the recipe sites that were lost traffic and both of them had heavy keyword term densities.

For example, I extracted the Heading outlines (H1, H2) of both sites and they both were hitting their target keywords hard in every single heading. A keyword density report of two sample pages revealed that the target keywords were being used as high as 5% of all words on the page.

“Seeing it reported heavily in the travel blog world too – dozens of high traffic travel blogs are significantly down from anecdotes I’m hearing.” A curious note about this update is that there are many publishers reporting that they have never been hit by a previous update and are surprised to have finally been hit by the November 2019 Google update. As a representative example, one publisher tweeted:

“Definitely frustrating. First time I’ve ever gotten a big hit from a Google update. Down 20-25%. For my local site, it seems mostly that more official sites got boosted over mine, even though mine has better and more in depth content.” A member of the private SEO Signals Lab Facebook group had a similar experience.

As an example, a Facebook member stated that his seven year old site that’s been in the top three for years suddenly dropped to page two and three.

Perhaps of interest or maybe not, this member reported having used content analysis software to analyze the SERPs to understand the kind of words are ranking for queries. Regardless if that’s a clue or not, this is another person out of many who reported having never suffered from a previous Google update and are now having a difficult time with this update.

Another Facebook member reported a 20% change in traffic but with little change in keyword positions. That kind of result is sometimes caused by an increase in People Also Ask, Featured Snippets, Carousels, Top Stories and other “helpful” Google features that tend to push organic results down.

According to Moz’s Mozcast, the biggest changes has been in the Top Stories, with a spike beginning on November 5th, 2019 that peaked on Thursday November 7th, when evidence of an update was beginning to surge.

Could that be causing some of the traffic declines? It’s hard to say, these are the first days of the update and information is still trickling in.

In general, there are more people reporting ranking losses than increases in the SEO Signals Labs group. And on Twitter there are many reporting losses, far more than winners.

Members of the self-described “gray hat” Proper SEO Facebook group are generally positive. This group is focused on Private Blog Network (PBN) links. The Admin of the group posted an Accuranker graph showing that all his keywords were on a steep upward trajectory, with one member saying his graph resembled a hockey stick.

Another member remarked that he was having a week to week improvement in sales on the order of 30%, with Friday tracking at a 70% improvement.

Several members noted that there have been huge gains in Google Local changes.

Overall, the gray hats are responding more positive than negative.

Over at the Black Hat World forums members are discussing dramatic changes to their rankings. Some are reporting losses as high as 40%.

A few however are reporting improvements from Google’s November update.

According to one member:

“There must be something going on, I’ve seen 2 people on amazon affiliate forum stating that their traffic took a huge nose dive. Mine is up 30% yesterday and today.”

While in another discussion a black hat member commented:

Over on WebmasterWorld Forums, members started noticing changes on Wednesday November 6th . One member noted on Thursday that they hadn’t seen conversions in 24 hours. Another member noted:

Google can’t tell apart anymore a legitimate site and a spam site. This is serious. The anti-spam team lost the battle.”

That observation seems to affirm the positive reports seen in black hat and gray hat communities.

“Entertainment industry here, I see lot of movement on my end, lot of sites losing their ranking heavily and couple hours later everything gets back to where they were.”

Someone asked me if I’m a white hat SEO. My response was that I’m more of a camo fishing hat type of SEO. In other words, I color within the lines while doing what needs to be done to get results.

That means understanding what Google is trying to accomplish and working within those parameters. It’s not about “tricking” Google. It’s about knowing the lines and coloring within those lines.

It’s also about being critical of SEO information that is unsupported by any  kind of Google research or patents. For example, for the past year there has been a line of thought that it’s important to add author bios to websites. That’s been debunked by Googlers like John Mueller.

There have been numerous responses to recent updates that have proven false because they were based on poor sources of information or poor reasoning. Thus, many of today’s poor observations  such as:

All of that advice have been debunked by Gary Illyes and John Mueller.

The Search Quality Raters Guidelines can be used to set goals for what a website can be and from those goals one can create strategies to achieve those high standards.

But that document was never a road map of Google’s algorithm. It was a road map for how to rate a website. That’s all. Two different things.  But that document is useless for trying to understand why a site is no longer ranking because there are no ranking secrets in the Search Quality Raters Guidelines.

Google Does Not Target Individual Niches

Google rarely targets an industry. In the past some SEOs promoted the idea that Google was targeting medical sites. They were wrong and now we are stuck with the ineptly  named Medic Update to remind the SEO industry that Google does not target specific industries.

Google is Not Targeting Recipe Blogs

Anyone who says that Google is targeting the recipe blogs is wrong. This update has affected publishers from all niches. It’s a broad update that affects a wide range of site topics.

The point then is to wait until we hear from Google.

It could be that Google is rolling out a combination of changes related to content, queries and backlinks. That’s a safe bet… but at this point, but we simply don’t know. To say that Google is targeting specific kinds of sites or types of content is to skate on thin ice.

Image Link Building: How to Use Visual Content to Earn More Links

Salesforce launches an hybrid CMS after investing in WordPress.com