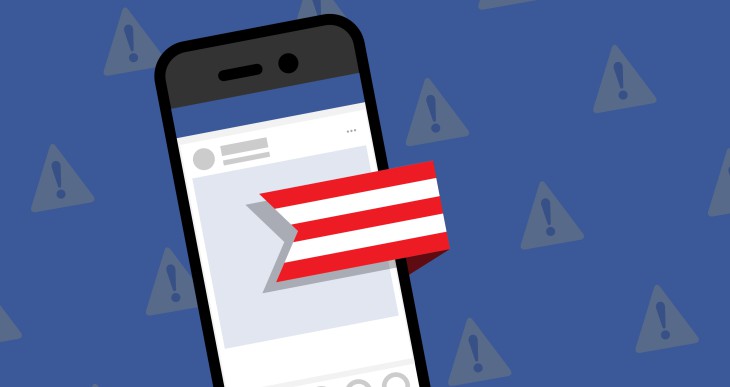 Permitting falsehood in political advertising would work if we had a model democracy, but we don’t. Not only are candidates dishonest, but voters aren’t educated, and the media isn’t objective. And now, hyperlinks turn lies into donations and donations into louder lies. The checks don’t balance. What we face is a self-reinforcing disinformation dystopia.

No one wants historically untrustworthy social networks becoming the honesty police, deciding what’s factual enough to fly. But the alternative of allowing deception to run rampant is unacceptable. Until voter-elected officials can implement reasonable policies to preserve truth in campaign ads, the tech giants should go a step further and refuse to run them.

This problem came to a head recently when Facebook formalized its policy of allowing politicians to lie in ads and refusing to send their claims to third-party fact-checkers. “We don’t believe, however, that it’s an appropriate role for us to referee political debates and prevent a politician’s speech from reaching its audience and being subject to public debate and scrutiny” Facebook’s VP of policy Nick Clegg wrote.

The Trump campaign was already running ads with false claims about Democrats trying to repeal the Second Amendment and weeks-long scams about a “midnight deadline” for a contest to win the one-millionth MAGA hat.

After the announcement, Trump’s campaign began running ads smearing potential opponent Joe Biden with widely debunked claims about his relationship with Ukraine. Facebook, YouTube and Twitter refused to remove the ad when asked by Biden.

In response to the policy, Elizabeth Warren is running ads claiming Facebook CEO Mark Zuckerberg endorses Trump because it’s allowing his campaign lies. She’s continued to press Facebook on the issue, asking “you can be in the disinformation-for-profit business, or you can hold yourself to some standards.”

We intentionally made a Facebook ad with false claims and submitted it to Facebook’s ad platform to see if it’d be approved. It got approved quickly and the ad is now running on Facebook. Take a look: pic.twitter.com/7NQyThWHgO

It’s easy to imagine campaign ads escalating into an arms race of dishonesty.

Campaigns could advertise increasingly untrue and defamatory claims about each other tied to urgent calls for donations. Once all sides are complicit in the misinformation, lying loses its stigma, becomes the status quo, and ceases to have consequences. Otherwise, whichever campaign misleads more aggressively will have an edge.

“In open democracies, voters rightly believe that, as a general rule, they should be able to judge what politicians say themselves.” Facebook’s Clegg writes.

But as is emblematic of Facebook’s past mistakes, it’s putting too much idealistic faith in society. If all voters were well educated and we weren’t surrounded by hyperpartisan media from Fox News to far-left Facebook Pages, maybe this hands-off approach might work. But in reality, juicy lies spread further than boring truths, and plenty of “news” outlets are financially incentivized to share sensationalism and whatever keeps their team in power.

Protecting the electorate should fall to legislators. But incumbents have few reasons to change the rules that got them their jobs. The FCC already has truth in advertising policies, but exempts campaign ads and a judge struck down a law mandating accuracy.

Granted, there have always been dishonest candidates, uninformed voters, and one-sided news outlets. But it’s all gotten worse. We’re in a post-truth era now where the spoils won through deceptive demagoguery are clear. Cable news and digitally native publications have turned distortion of facts into a huge business.

Most critically, targeted social network advertising combined with donation links create a perpetual misinformation machine. Politicians can target vulnerable demographics with frightening lies, then say only their financial contribution will let the candidate save them. A few clicks later and the candidate has the cash to buy more ads, amplifying more untruths and raising even more money. Without the friction of having to pick up the phone, mail a letter, or even type in a URL like TV ads request, the feedback loop is shorter and things spiral out of control.

Many countries including the UK, Ireland, and the EU ban or heavily restrict TV campaign ads. There’s plenty of precedent for policies keeping candidates’ money out of the most powerful communication mediums.

Campaign commercials on US television might need additional regulation as well. However, the lack of direct connections to donate buttons, microtargeting, and rapid variable testing weaken their potential for abuse. Individual networks can refuse ads for containing falsehoods as CNN recently did without the same backlash over bias that an entity as powerful as Facebook receives.

This is why the social networks should halt sales of political campaign ads now. They’re the one set of stakeholders with flexibility and that could make a united decision. You’ll never get all the politicians and media to be honest, or the public to understand, but just a few companies could set a policy that would protect democracy from the world’s . And they could do it without having to pick sides or make questionable decisions on a case-by-case basis. Just block them all from all candidates.

Facebook wrote in response to Biden’s request to block the Trump ads that “Our approach is grounded in Facebook’s fundamental belief in free expression, respect for the democratic process, and the belief that, in mature democracies with a free press, political speech is already arguably the most scrutinized speech there is.”

But banning campaign ads would still leave room for open political expression that’s subject to public scrutiny. Social networks should continue to let politicians say what they want to their own followers, barring calls for violence. Tech giants can offer a degree of freedom of speech, just not freedom of reach. Whoever wants to listen can, but they shouldn’t be able to jam misinformation into the feeds of the unsuspecting.

If the tech giants want to stop short of completely banning campaign ads, they could introduce a format designed to minimize misinformation. Politicians could be allowed to simply promote themselves with a set of stock messages, but without the option to make claims about themselves or their opponents.

Campaign ads aren’t a huge revenue driver for social apps, nor are they a high-margin business nowadays. The Trump and Clinton campaigns spent only a combined $81 million on 2016 election ads, a fraction of Facebook’s $27 billion in revenue that year. $284 million was spent in total on 2018 midterm election ads versus Facebook’s $55 billion in revenue last year, says Tech For Campaigns. Zuckerberg even said that Facebook will lose money selling political ads because of all the moderators it hires to weed out election interference by foreign parties.

Surely, there would be some unfortunate repercussions from blocking campaign ads. New candidates in local to national elections would lose a tool for reducing the lead of incumbents, some of which have already benefited from years of advertising. Some campaign ads might be pushed “underground” where they’re not properly labeled, though the major spenders could be kept under watch.

If the social apps can still offer free expression through candidates’ own accounts, aren’t reliant on politicians’ cash to survive, won’t police specific lies in their promos, and would rather let the government regulate the situation, then they should respectfully decline to sell campaign advertising. Following the law isn’t enough until the laws adapt. This will be an ongoing issue through the 2020 election, and leaving the floodgates open is irresponsible.

If a game is dangerous, you don’t eliminate the referee. You stop playing until you can play safe.