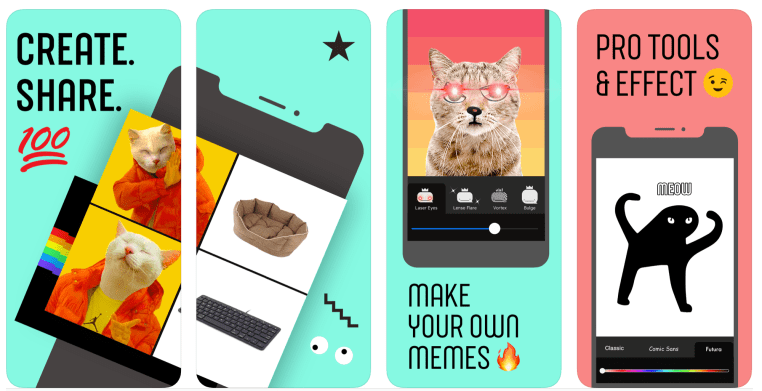 Facebook’s NPE Team, a division inside the social networking giant that will build experimental consumer-facing social apps, has now added a third app to its lineup with the launch of meme creation app Whale. Currently, the app allows users to decorate photos with text and stickers in order to create memes that can be shared to social media or texted to friends.

The app isn’t all that original, given the plethora of image-editing apps on the App Store today with similar feature sets. But it does have the advantage of being free to use without in-app purchases or subscriptions.

In Whale, users can take a photo, select a picture from their camera roll, or browse the app’s library of stock images in order to create a meme. Blank, 2-grid, 3-grid, and 4-grid canvas layouts are also available. To customize the images, users can add emojis, text, effects, and filters like laser eyes, vortex or bulge, for example.

In addition to making shareable memes, users can make their own image stickers using the crop and cut tools. And those with artistic capabilities can use the included freeform drawing tool, as well.

Like other NPE Team apps, Whale isn’t offered for download in the U.S. Instead, it’s only available in Canada for the time being — the home market for the first two NPE Team apps, Aux and Bump. The latter was also available in the Philippines, but neither have reached the U.S. Canada is likely being chosen as it’s a good proxy for the U.S., in terms of consumer demographics and user behavior, but has fewer users to contend with, in case an app takes off and has to quickly scale.

Facebook had announced its plans for the NPE Team back in July, explaining that its goal would be to rapidly experiment with new ideas, and shut down those projects that didn’t gain traction.

Its investment in creating new mobile social experiences comes at a time when Facebook’s suite of apps is facing serious competition from newer publishers, including most notably, Snapchat and TikTok. More broadly, the social networking app market is today filled with Snapchat platform apps, like Yolo or LMK, at the top of the charts, alongside newer video chat apps like Houseparty and Marco Polo.

App store intelligence firm Apptopia was first to spot Whale’s launch, which was reported by The Information. The app arrived on November 15, 2019, according to App Annie but it hasn’t yet ranked in any App Store category at this time.

Facebook says it’s not commenting on individual NPE Team apps, but had previously noted that the availability of the apps would depend on each app itself.