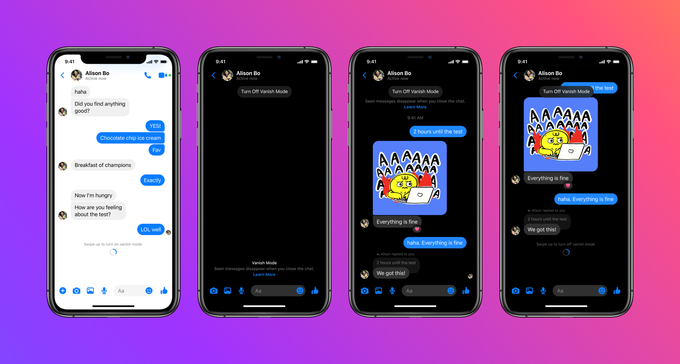 Facebook today announced its new Snapchat-like feature for disappearing messaging, Vanish Mode, is arriving on Messenger and Instagram. The feature, meant for more casual conversations, allows users to set chats to automatically delete after the message is seen and the chat is closed.

In Vanish Mode, Messenger and Instagram users can send text chats, emoji, pictures, GIFs, voice messages and stickers, which will disappear after they’ve been seen and users leave the chat, Facebook explains. 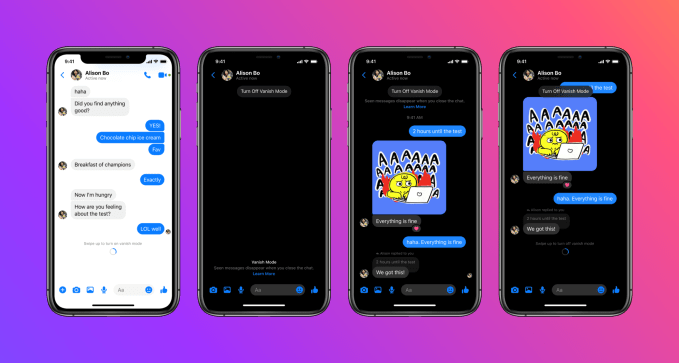 However, unlike on Snapchat, Vanish Mode is not a default setting. Instead, users are meant to enable it from within an existing chat by swiping up on their mobile device’s screen while in the chat.

Upon first launch, a screen will appear explaining how Vanish Mode works. It also notes that users will be alerted if someone takes a screenshot of the conversation — as Snapchat does.

For safety purposes, Facebook supports blocking and reporting in Vanish Mode. If a user in the conversation reports a chat, the disappearing messages will be included for up to 1 hour after they disappear, the company explains. This allows Facebook to review the reported conversation and take action, if need be.

Vanish Mode is also an opt-in experience — meaning you can can choose whether to enter a Vanish Mode chat. And it only works with people you’re connected to, Facebook says.

Facebook’s plans for Vanish Mode were announced earlier as part of its overhaul of the Instagram messaging experience in September. This update had included the ability for Instagram and Messenger users to communicate across apps, along with other “fun” features.

As a part of that update, Instagram received many Messenger-inspired additions — like the ability to change the chat color or react with any emoji, for example. But though announced, the Vanish Mode feature was then said to be coming “soon.”

That’s par for the course for Facebook these days. The company already copied the Stories format popularlized by Snapchat, and now that product alone on each of its platforms is used by more people (500+ million than all of Snapchat (249 million).

To get Vanish Mode, and other recent updates to the Instagram messaging experience, users have to opt-in to the upgrade. Essentially, these new features are being used as lures to get Instagram users to agree to the upgrade.

The upgrade then locks them further inside the Facebook universe as they then also receive the ability to communicate cross-platform with users on Facebook. Eventually, WhatsApp may become a part of this cross-platform communication strategy, as well.

Once upgraded, people can use just one messaging app to reach friends and family on two of the largest social networks in the world. And with additions like Vanish Mode, they won’t miss out on things found on competitors’ apps. Meanwhile, with Reels on Instagram, Facebook aims to retain TikTok users, too.

Facebook says Vanish Mode is launching starting today on Messenger in the U.S., Canada, Mexico, Peru and Bangladesh, and on Instagram (soon) in Canada, Argentina, Chile, Peru and a few other countries. It will soon roll out to other countries across both platforms, the company says.