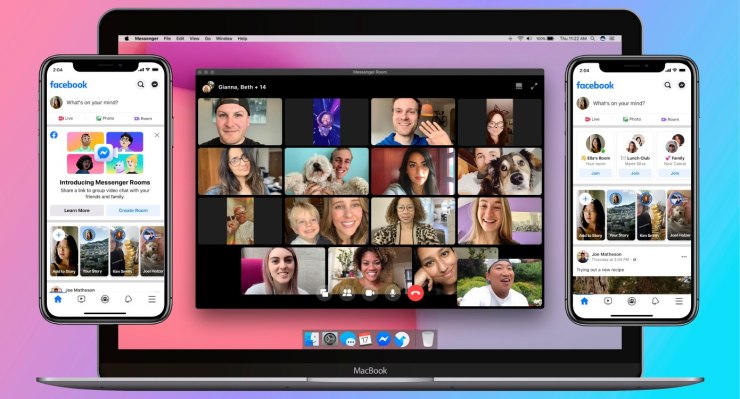 Zoom was never meant to be a social network, but the enterprise video chat app has become essential software for those looking to stay in touch with friends and family during the pandemic.

Today, Facebook looks to steal back the service’s social video chat growth as it globally launches Messenger Rooms, its new group video chat service, supporting video calls with up to 50 participants with no time limits on call length. The feature capitalizes on video chat’s massive spike in usage across services and hooks it up to the growth tactics Facebook used to push Facebook and Instagram Live into everyone’s feeds.

Messenger Rooms is a drop-in video chat, so when a friend using the feature creates a room, Facebook will alert users via a new section in the news feed or push a notification to certain friends. As Facebook detailed when it announced the feature, soon users will also be able to join and initiate calls from inside Instagram DMs, WhatsApp and on Portal, making this a company-wide social effort for the company.

For now users can kick off a call from Messenger or the Facebook app and send out invites to users, even ones that don’t have a Facebook account.

During the latest earnings call, Facebook CEO Mark Zuckerberg said time on group video chats had increased 1,000% in recent weeks. Given the feature’s social grounding and lack of screen sharing, the app isn’t likely to scale heavily into enterprise use cases and infringe on Zoom’s core business. With Messenger Rooms, Facebook is looking to create a scalable, free alternative and steal back some of the conversation from platforms like Zoom and TikTok, which have been awfully buzzy during recent months.