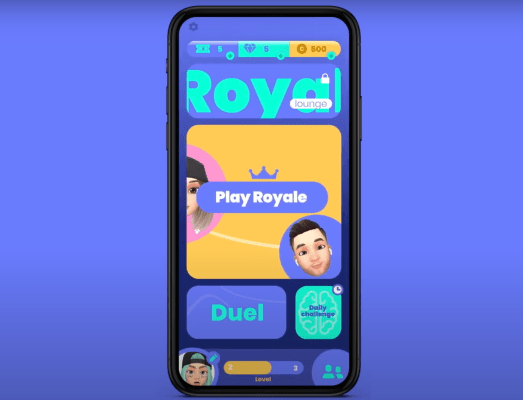 In its first few weeks of release, the latest game from QuizUp founder Thor Fridriksson took the top spot in the Games Section of Apple’s App Store and was the top app (for a brief time) in the App Store at large.

Since its launch on June 17, Trivia Royale has been downloaded more than 2.5 million times, with day-one retention of 45% and week-one retention of 45% on iOS, according to the company. Average daily usage per user is around 30 minutes. It currently sits in the number six spot in the Free Games category on the App Store.

There is no shortage of mobile games, but in such a cluttered space, it’s difficult to break through the noise. So how did Trivia Royale do it?

The game, which lets users compete in a 1,000-person, single-elimination trivia tournament, is built on the Teatime Games platform. Teatime emphasizes the fun of playing against other humans in the mobile gaming landscape, giving users the ability to communicate via video chat while they play in a game on their smartphone.

The platform allows game developers to use this video chat functionality, which comes with Snapchat-like face filters or Apple Memoji-style avatars, on their own games. But for Teatime to truly succeed as a gaming platform, the company needed a hit game, Fridriksson said.

The serial entrepreneur told TechCrunch that he decided to take off his CEO hat and return to his product roots by focusing on a category that few people know as well as he does: trivia.

The Trivia Royale tournament combines the scale of Battle Royale with the durability of trivia — whether it’s Jeopardy, HQ Trivia, bar trivia or this, we can’t get enough of it — or lets users match against one other player in a single category of trivia.

I’ve played around on the game for a while now and can say that it’s very well done, from the design to the production value. But more important than the mechanics of the tournament or the typeface or even the content of the questions are the avatars, which let users express themselves through customization and their real-life facial expressions.

But none of that means anything if players don’t join the game. So how did Trivia Royale earn more than 2.5 million downloads (and climbing) in a matter of days?

A big bet on TikTok

Fridriksson told TechCrunch that he has to give a ton of credit to his kids (who are 15 and 11). His daughter told him about TikTok and gave him a list of her favorite stars, including Addison Rae and Dixie D’Amelio.