Home APPS Instagram adds a dedicated spot for your pronouns 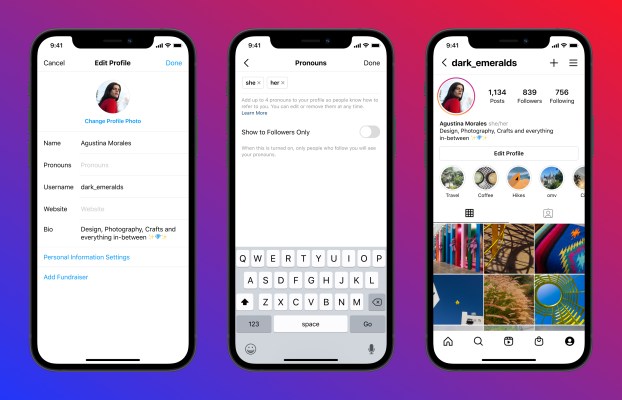 Seeing someone mention their pronouns in their Instagram bio has become commonplace — so much so that the app now has a dedicated location where users can put pronouns without taking up that valuable profile space.

The company announced the new feature on Twitter, saying that it is only available in a few countries just now, but will be arriving in more soon. I was able to make it work here in the U.S. in version 187 of the iOS app.

To set your pronoun, just go to your profile page, hit “Edit Profile,” then look in the list of items for an empty Pronouns field (this is different from the one deeper in “personal information settings). Tap that and you can pick what you prefer to be called by — up to four items.

Interestingly, the feature does not allow users to just type in whatever they want — presumably so the field is used for its intended purpose and not for gender-related “jokes.” I was able to find most of the pronouns on this list, and my guess is Instagram will add more if people ask. (I’ve contacted the company asking for more information.)

Whatever you choose will appear next to your name a slightly darker type — there’s also the option to show this only to followers, in case a person’s gender isn’t something they want to share publicly. Of course if you want to freeform it or use some emoji or fancy font, you can skip the “official” pronouns and do that instead.

Not everyone feels the need to share or specify their gender, but the practice has become so widespread that Instagram made a smart choice in making it an integrated part of the profile. It both saves space (now you can put “Doom metal fiend” and “Proud mom” on two lines) and endorses gender identity as something at least as important as links and other bio info.