Home APPS Not on Nextdoor? You can still grab your neighbors’ stuff on Free Finds 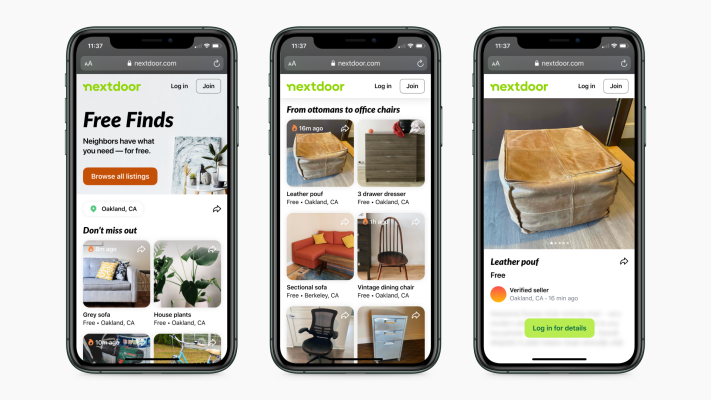 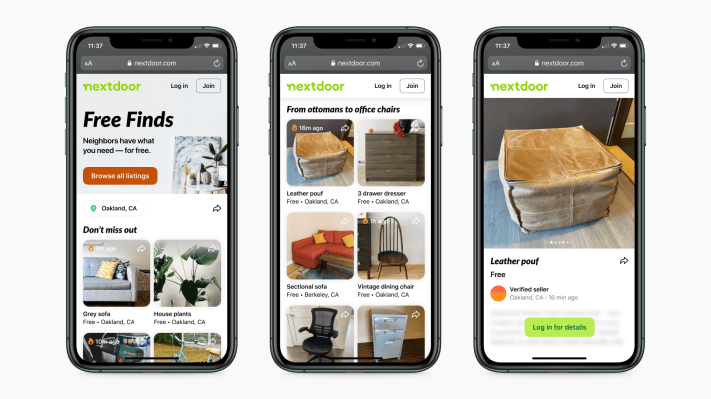 Nextdoor, the app that helps neighbors connect, launched a new feature called Free Finds today, which will help people browse the free items available in their neighborhoods. Since the start of 2020, monthly listings to buy, sell, and give away items on Nextdoor have increased by 80%, but 25% of these listings advertised free stuff. So, the company decided to create a more streamlined way to get the word out about cool, free stuff on the curbs of your neighborhood.

You don’t have to be a member of Nextdoor to scroll through the free listings. Typically, becoming a member can be a complicated process that requires you to verify your home address via snail mail. But now, whether you’re looking for a free blender or seeking your next trash-to-treasure upcycle project, you can browse what’s up for grabs in your neighborhood.

To contact the seller, you need to set up a free account and go through the standard Nextdoor sign-up process. If your cell service billing address is at the same address where you live, the sign-up process is quick – you can verify your address via text. But, if the addresses don’t match (read: if you’re still on your parents’ family plan), it can take up to ten days to receive an invitation letter to become a verified Nextdoor member. By then, that lightly worn pair of boots might be long gone.

If you live in a densely populated area, you can probably find a neighborhood “free and for sale”-themed group pretty easily on Facebook. But, at the outset, Nextdoor adds a level of functionality by filtering items into categories, like “for young ones,” “for plant parents,” “spoil your pets,” and “hidden treasures.” It could also appeal to those who don’t want to deal with browsing through multiple Facebook groups, including those that  stretch beyond their neighborhood to nearby areas that would require a commute.

Nextdoor emphasizes the environmental benefits of a feature like Free Finds, which can help neighbors reduce waste when they discard perfectly usable items – instead, they can share resources with their neighbors. But more broadly, Free Finds is about leveraging people’s interest in free stuff to grow Nextdoor’s user base.

It also comes at a time when Facebook is threatening Nextdoor more directly. The tech giant launched its Neighborhoods feature in Canada last month, which is an obvious Nextdoor clone (Facebook copying other social media apps? Stop me if you’ve heard this one before). The feature should roll out soon for U.S. users.

Over the last year, Nextdoor has launched multiple initiatives that aim to support communities, like Sell For Good, which allowed users to sell items on the social network and donate proceeds to nonprofit causes. In response to the coronavirus outbreak, it also added features like Help Maps, Groups, a fundraising option for local businesses, and a neighborly assistance program created with Walmart.

Still, some consumers have become understandably skeptical of neighborhood-based social media apps. The Black Mirror-adjacent crime-reporting app Citizen recently came under fire when its CEO Andrew Frame bribed users with $30,000 to catch an arsonist using the app’s new livestreaming service, but had targeted the wrong person. Nextdoor, meanwhile, had in the past developed such reputation for racial profiling, that the company eventually had to roll out special tools to address this. Today, it still faces accusations of allowing unneighborly behavior, including political discussions and other posts that can make minority groups feel unwelcome or even unsafe.

Ultimately, investing in new products that encourage the opposite behavior — neighbors helping neighbors, as Free Finds offers — can only go so far to combat the app’s reputation.

The new Free Finds feature is live today in all the countries where Nextdoor operates at either nextdoor.com/freefinds or by visiting the Nextdoor Finds section in the Nextdoor app.