Home APPS Pinterest Overtakes Snapchat in Popularity Among US Users 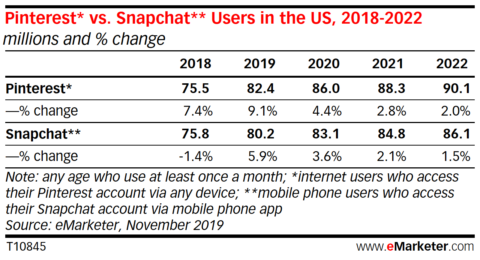 Pinterest is now the third largest social media platform in the United States, a position which it’s expected to keep for the foreseeable future.

This data comes from eMarketer’s latest estimates, which sees Pinterest ending 2019 with 82.4 million users. Pinterest managed to surpass Snapchat’s 80.2 million users, which is notable considering Snapchat’s user base has been larger than Pinterest’s in recent years. As eMarketer reports, Pinterest had such a good year in 2019 that it more than doubled previous estimates:

“Pinterest saw 9.1% growth in 2019, a revision from our previous estimate of 4.3% growth. This year, it will have 86.0 million users, compared with Snapchat’s 83.1 million. The gap between the two platforms’ user bases will continue to grow through the end of our forecasting period in 2023.”

The growth of Pinterest is attributed to its universal appeal across different age groups, while Snapchat caters primarily to a younger audience. ”Pinterest’s users are more evenly represented across all age groups as a percentage of the general population, while Snapchat’s are much more skewed in the younger age groups.”

Pinterest users will account for 41.1% of all US social network users in 2020, a number which is expected to grow over the next three years. Snapchat is expected to gain users this year but fall flat it 2021.