Home NEWS Trump gets on Twitch 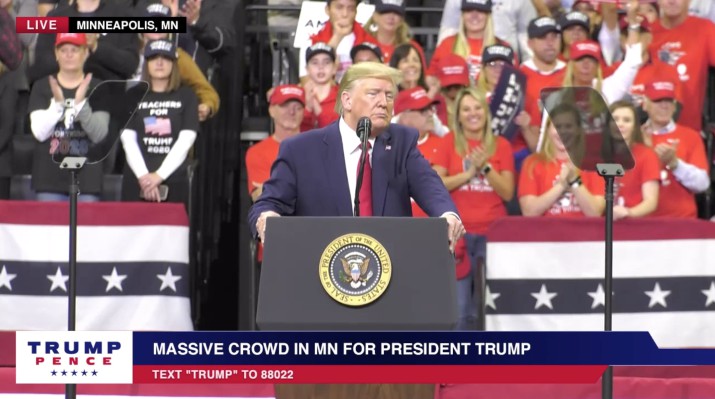 The reelection campaign will be live-streamed. US president Donald Trump has joined Amazon-owned live-streaming platform Twitch.

Twitch is best known as a social video streaming platform for gamers but does host other content, including politics.

The verified DonaldTrump Twitch account, spotted earlier by Reuters, has just one video in the recent broadcast section so far: A live stream of a Trump rally that took place in Minneapolis yesterday evening.

Alongside the saved video of this broadcast is a growing selection of user-generated clips culled from the stream, with titles such as “This is our president.”, “LOL”, “KEK” and “pepelaugh”.

Another clip remarks on how a single black man — who’s visible in the top corner of the shot of the audience behind Trump — vanishes as “they zoom him out of the picture”.

Trump is not the only high-profile US politician to be taking to Twitch to broadcast campaign rallies in real time ahead of next year’s presidential election.

Democratic senator Bernie Sanders, who is making a pitch to be the party’s presidential candidate, joined the platform a few months ago. And at the time of writing Sanders still has more followers than Trump on Twitch (88,795 vs 37,754).

Over on Twitter, meanwhile — Trump’s go-to social media soapbox for skewering opponents and deflecting criticism, via his preferred medium of the early morning attack tweet — the president has ~65.6M followers.

So Twitter is very unlikely to be concerned that its highest-profile user is flirting with Amazon’s social streaming platform. (Though it’s much less clear how happy “Jeff Bozo” will be about Trump getting on Twitch.)

Trump has dabbled with using Twitter’s own video streaming tool, Periscope. But the choice of Twitch for streaming his campaign rallies looks mostly like a case of horses for courses. Periscope is more for on-the-fly mobile streaming, whereas Twitch is a platform built for playing to (and building) a ‘lean back’ audience.

Troll culture also thrives on gamer Twitch. And Trump is of course edgelord of the trolls. Ergo he should fit right in.

With Periscope Twitter has been taking a stronger approach to tackling abusive comments in recent years (and also trying to fight fake and spam content) — in line with its stated desire to increase ‘conversational health’ on its platforms. So it’s probably happy to have dodged a bullet here.

Certainly Twitter CEO Jack Dorsey has more enough flying his way over whatever Trump choses to tweet next.