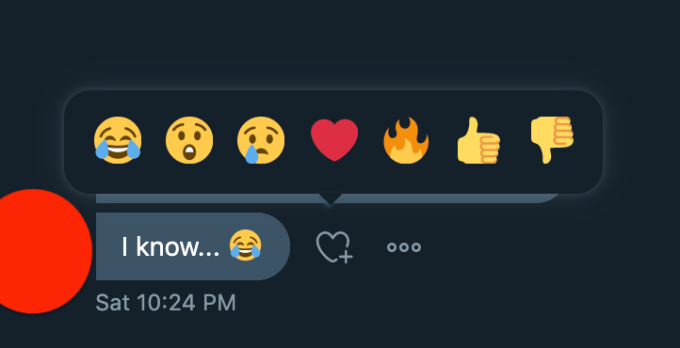 Twitter is pouring a little more fuel on the messaging fire. It’s added a heart+ button to its direct messaging interface which lets users shortcut to a pop-up menu of seven emoji reactions so they can quickly express how they’re feeling about a missive.

Emoji reactions can be added to text or media messages — either via the heart+ button or by double tapping on the missive to bring up the reaction menu.

The social network teased the incoming tweak a few hours earlier in a knowing tweet about sliding into DMs that actually revealed the full line-up of reaction emojis — which, in text form, can be described as: Crying lol; shocked/surprised; actually sad; heart; flame; thumb-up and thumb-down. 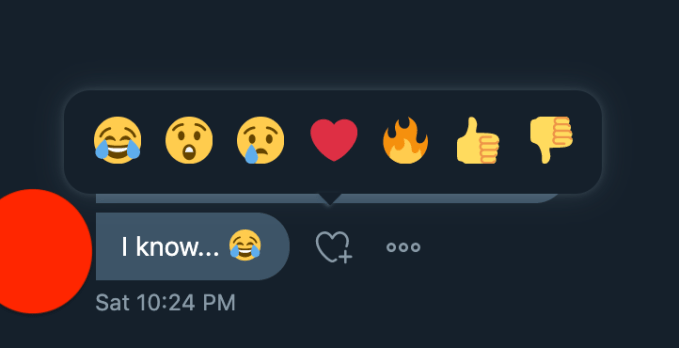 So instead of a smilie face Twitter users are being nudged towards an on-brand-message Twitter heart, in keeping with its long-standing pick for a pleasure symbol.

The flame is perhaps slightly surprising for a company that’s publicly professed to wanting to improve the conversational health of its platform.

If it’s there to stand in for appreciation a clap emoji could surely have done the trick. Whereas flame wars aren’t typically associated with constructive speech. But — hey — the flame icon does catch the eye…

Twitter is late to this extroverted party. Rival messaging platforms such as Apple iMessage and Facebook Messenger have had emoji reactions for years, whereas Twitter kept things relatively minimal and chat-focused in its DM funnel — to its credit (at least if you value the service as, first and foremost, an information network).

So some might say Twitter jumping on the emoji reaction bandwagon now is further evidence it’s trying to move closer to rivals like Facebook as a product. (See also: Last year’s major desktop product redesign — which has been compared in look and feel to the Facebook News Feed.)

But if so this change is at least a relatively incremental one.

Twitter users have also, of course, always been able to react to an incoming DM by sending whatever emoji or combination of emoji they prefer as a standard reply. Though now lazy thumbs have a shortcut to emote — so long as they’re down with Twitter’s choice of icons.

In an FAQ about the new DM emoji reactions, Twitter notes that emoting will by default send a notification to all conversation participants “any time a new reaction is added to a message”. 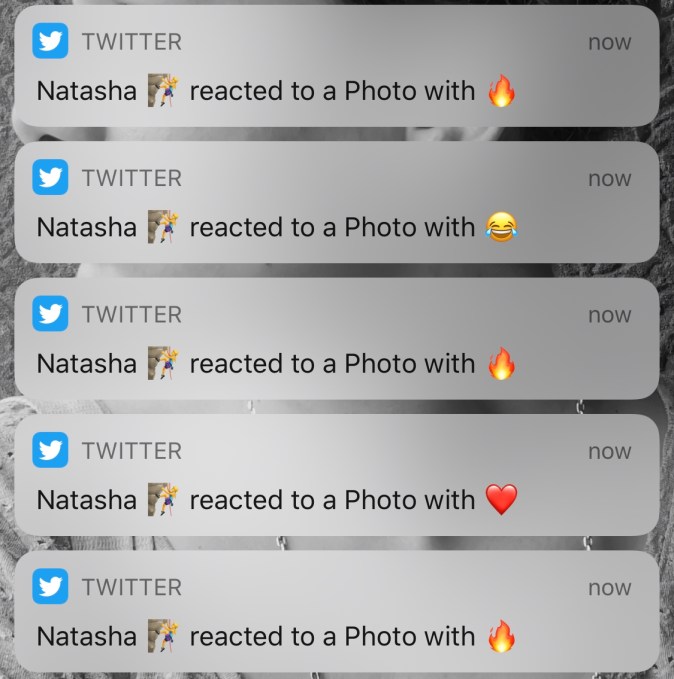 You can only choose one reaction per missive. Each symbol is displayed under the message/media with a count next to it — to allow for group tallies to be totted up.

NB: Clicking on another symbol will swap out the earlier one — generating, er, more notification spam. And really annoying people could keep flipping their reaction to generate a real-time emoji streaming game of notification hell (hi growth hackers!) with folks they’ve been DMing with. So that’s another good reason to lock down your Twitter settings.

Users still running older version of Twitter’s apps which don’t support message reactions will see a standard text emoji message per reaction sent (see examples below). This kinda confusingly makes it look like the reaction sender has actually been liking/flaming their own stuff. So all the more reason to not be spammy about emoji. 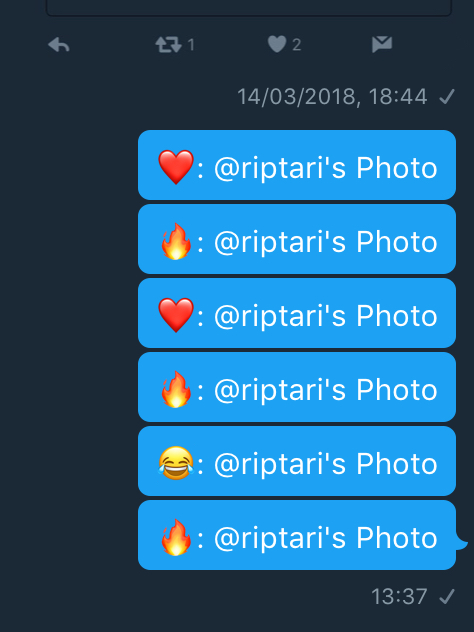