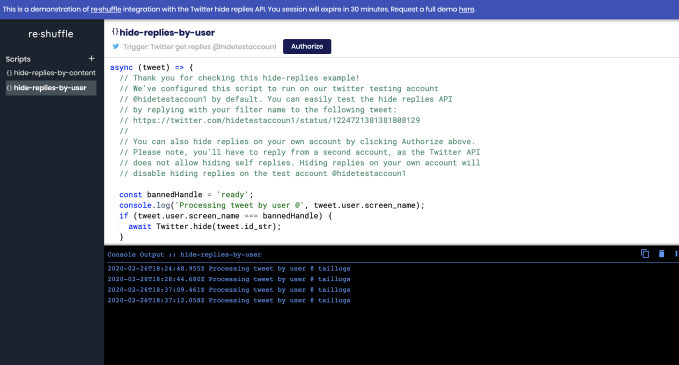 Last November, Twitter rolled out its Hide Replies feature to all users worldwide. The feature, largely designed to lessen the power of online trolls to disrupt conversations, lets users decide which replies to their tweets are placed behind an extra click. Today, Twitter is making Hide Replies available to its developer community, allowing for the creation of tools that help people hide the replies to their tweets faster and more efficiently, says Twitter.

These sorts of tools will be of particular interest to businesses and brands who maintain a Twitter presence, but whose accounts often get too many replies to tweets to properly manage on an individual basis. With Hide Replies now available as a new API endpoint, developers can create tools that automatically hide disruptive tweets based on factors important to their customers — like tweets that include certain prohibited keywords or those that score high for being toxic, for example.

Ahead of today’s launch, Twitter worked with a small number of developers who are now releasing tools that take advantage of the added functionality.

Jigsaw, an Alphabet-owned company tackling the worst of the web, has integrated Twitter’s new endpoint with its Perspective API, which uses A.I. to score tweets based on their toxicity. The integration will automatically hide replies that exceed a certain toxic threshold (.94), freeing up the time it would otherwise take to comb through replies manually.

A scripting platform for business workflows, reshuffle, has used the endpoint to develop scripts that detect and hide replies based on keywords or even by user. 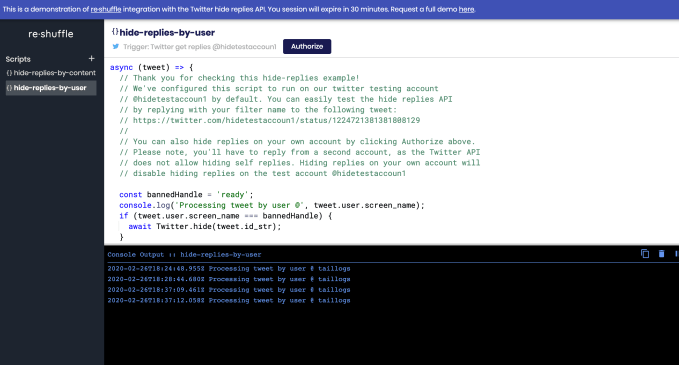 Dara Oladosu, the creator of the popular app QuotedReplies, also used the endpoint to build a new app called Hide Unwanted Replies. The app today automatically hides replies by keywords or Twitter handles. Soon, it will add support for hiding replies from likely troll or bot accounts — including tweets from user accounts created too recently or from accounts with few followers. 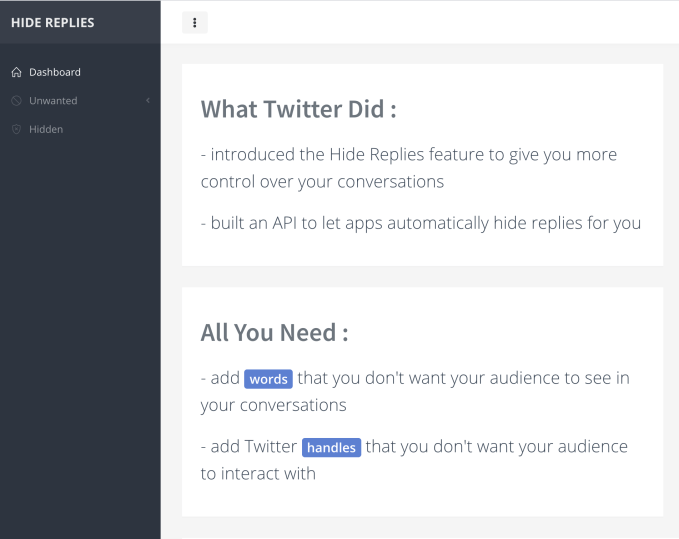 Hide Replies has been one of Twitter’s more controversial launches to date, as it could potentially allow users to silence critics or stifle dissent even when warranted — such as in the case of refuting misinformation or propaganda, for example. Others argue it’s not really helping address online abuse; the abuse still occurs, but in the shadows. One organization even recently leveraged Hidden Replies for a clever online campaign about how domestic violence goes unseen which further illustrates this problem.

Nevertheless, adoption of Hide Replies is growing, with organizations like the CIA even leveraging it on some tweets.

The new Twitter API endpoint for Hide Replies is available today to all developers in a production-ready form, Twitter says, initially through Twitter Developer Labs. This program launched last year to serve as a way for developers to try out Twitter’s latest APIs ahead of their wider release and offer feedback. Participation in Twitter Developer Labs is free, but interested developers have to sign up using an approved developer account. Twitter is also inviting developers building with the new endpoint to collaborate with the company by way of the community forums.

Based on early feedback from the first testers, Twitter says it’s already making a few changes to the endpoint including support to unhide replies via the endpoint, a higher rate limit to support high-volume use cases, and a way to retrieve a list of replies that indicate if they’re hidden or not.