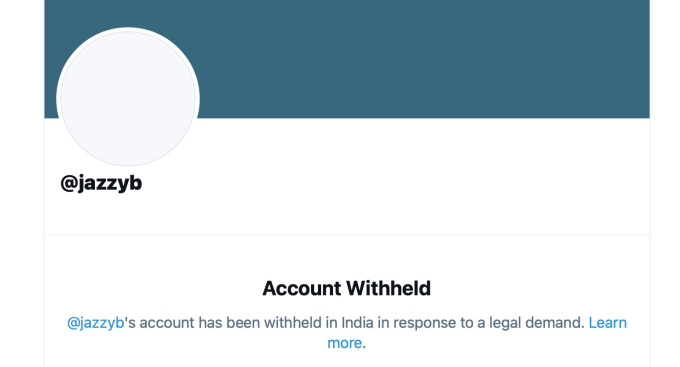 Twitter disclosed on Monday that it blocked four accounts in India to comply with a new legal request from the Indian government.

The American social network disclosed on Lumen Database, a Harvard University project, that it took action on four accounts — including those of hip-hop artist L-Fresh the Lion and singer and song-writer Jazzy B — to comply with a legal request from the Indian government it received over the weekend. The accounts are geo-restricted within India but accessible from outside of the South Asian nation. (As part of their transparency efforts, some companies including Twitter and Google make requests and orders they receive from governments and other entities public on Lumen Database.)

All four accounts, like several others that the Indian government ordered to be blocked in the country earlier this year, had protested New Delhi’s agriculture reforms and some had posted other tweets that criticized Prime Minister Narendra Modi’s seven years of governance in India, an analysis by TechCrunch found.

A Twitter spokesperson told TechCrunch that when the company receives a valid legal request, it reviews it under both its own rules and local laws.

“If the content violates Twitter’s Rules, the content will be removed from the service. If it is determined to be illegal in a particular jurisdiction, but not in violation of the Twitter Rules, we may withhold access to the content in India only. In all cases, we notify the account holder directly so they’re aware that we’ve received a legal order pertaining to the account,” the spokesperson added. 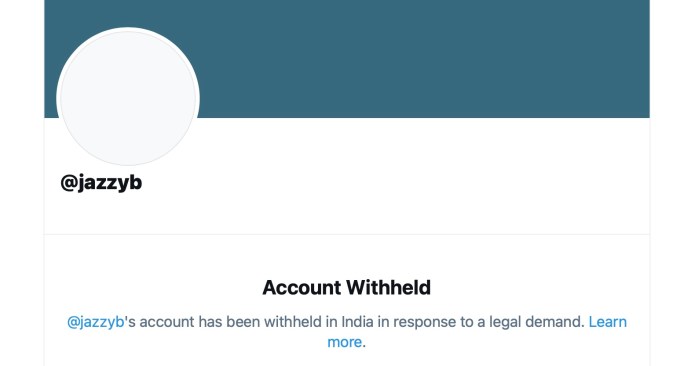 The new legal request, which hasn’t been previously reported, comes at a time when Twitter is making efforts to comply with the Indian government’s new IT rules, new guidelines that several of its peers including Facebook and Google have already complied with.

On Saturday, India’s Ministry of Electronics and Information Technology had given a “final notice” to Twitter to comply with its new rules, which it unveiled in February this year. The new rules require significant social media firms to appoint and share contact details of representatives tasked with compliance, nodal point of reference and grievance redressals to address on-ground concerns.

Tension has been brewing between Twitter and the government of India of late. Last month, police in Delhi visited Twitter offices to “serve a notice” about an investigation into its intel on classifying Indian politicians’ tweets as misleading. Twitter called the move a form of intimidation, and expressed concerns for its employees and requested the government respect citizens’ rights to free speech.

Late last month, Twitter had requested New Delhi to extend the deadline for compliance with the new rules by at least three months.

The Jack Dorsey-led company has grappled with several tough situations in India, one of its biggest market by users, this year. After briefly complying with a New Delhi order early this year, the company faced heat from the government for restoring accounts that had posted tweets critical of the Indian government’s policy or Prime Minister Narendra Modi.

The two faced off again publicly in April after New Delhi ordered Twitter and Facebook to take down posts that were critical of the government’s handling of the coronavirus pandemic.

Google: We Don’t Do Anything Special For All -Caps Headings