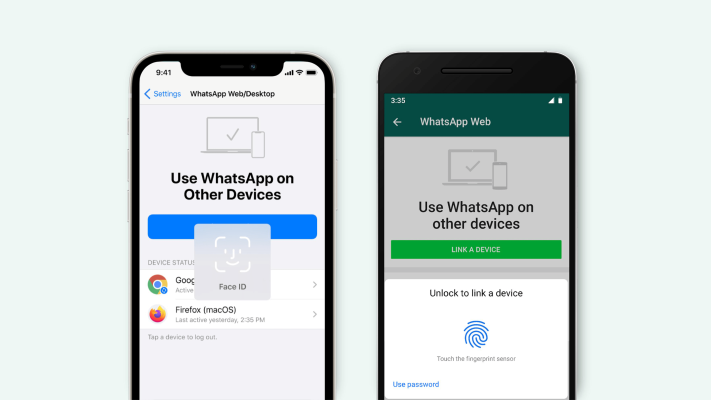 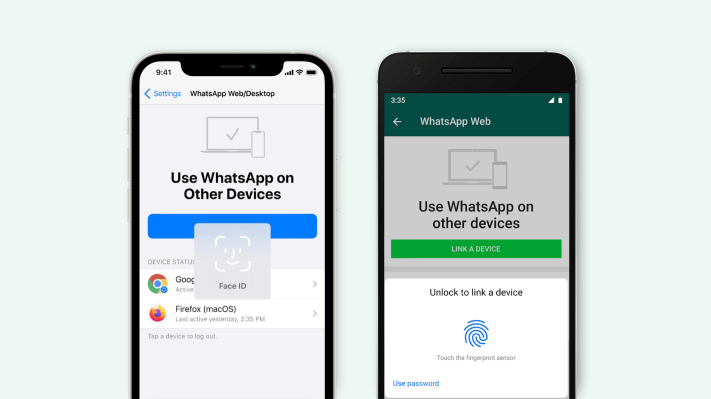 WhatsApp, the Facebook-owned popular messaging app with more than 2 billion users, has been getting a lot of heat and losing users in recent weeks after announcing (and then delaying) changes to how it uses your data. It’s not done with how it’s tweaking privacy and security. Now, it’s adding a new biometric feature to the service to bring in a new authentication layer for those using its web and desktop versions.

The company said that from today, it will let people add in a fingerprint, face, or iris scan to use WhatsApp on desktop or web by linking it to your mobile app, to be used alongside the existing QR code authentication.

The feature is coming on the heels of what WhatsApp is describing as a “visual refresh” of the WhatsApp web page on the Android and iOS apps for linking and managing devices connected to your account. The company hints there will be more updates coming soon.

With the new feature, you will now be able to add in a biometric login, which uses either a fingerprint, face ID, or iris ID — depending on the device — on Android or iPhone handsets, to add in a second layer of authentication. It works only if you’ve enabled biometric authentications on your device: it doesn’t if you have not.

When implemented, it will appear for users before a desktop or web version can be linked up with a mobile app account, which today relies just on using a QR code. The QR code doesn’t go away; this is a second step users will need to take, similar to how you can choose to implement two steps of authentication on a handset to use the WhatsApp mobile app today.

WhatsApp says that on iPhone, it will work with all devices operating iOS 14 and above with Touch ID or Face ID, while on Android, it will work on any device compatible with Biometric Authentication (Face Unlock, Fingerprint Unlock or Iris Unlock). The full instructions for how to turn it on are here.

The service is another step forward in WhatsApp creating more feature parity between its flagship mobile apps and how you interact with the service when you use it elsewhere.

While WhatsApp started as a mobile messaging app, it has over the years been building out other ways of using it, for example adding desktop support in 2015 to the iOS version.

Mobile still accounts for the majority of WhatsApp’s users, but events like global health pandemics, which are keeping more of us inside, are likely leading to a surge of users of its Web and native desktop apps, and so it makes sense for it to be adding more functionality there.

WhatsApp told TechCrunch that it is going to be adding in more features this year to bring the desktop and mobile experiences closer together. There are still big gaps. For example, you can’t make calls on the WhatsApp web version. (That feature may be one coming soon: last month, it started to get spotted in beta tests.)

What comes next for biometrics?

WhatsApp’s recent announcement (and walk back) regarding data-sharing changes between it and Facebook have put a lot of people on edge about the company’s intentions.

And that’s no surprise. It’s a particularly sensitive issue since messaging has been thought of a very personal and sometimes private space, seen as separate from what people do on more open social networking platforms.

See also  Facebook can save itself by becoming a B Corporation

Over the years, of course, that view has been eroded through data leaks, group messaging abuse, and (yes) changes in privacy terms.

All that means there will likely be a lot of people who will doubt what Facebook’s intentions are here, too.

WhatsApp is pretty clear in outlining that it’s not able to access the biometric information that you will be storing in your device, and that it is using the same standard biometric authentication APIs that other secure apps, like banking apps, use.

But the banking app parallel is notable here, and maybe one worth thinking about more. Consider how the company has been adding a lot more features and functionality into WhatsApp, including the ability to pay for goods and services, and in markets like India, tests to offer insurance and pension products.

Yes, this new biometric feature is being rolled out today to create a more secure way for people to link up apps across devices. But in the interest of that feature parity, in future, it will be interesting to see how and if biometrics might appear as those other features get rolled out beyond mobile, too.

Update: Text corrected to reflect that the new look will be on the mobile apps (not the web) aimed at improving how to manage linked devices.

Should You Publish Content on a Company Blog or Medium.com?