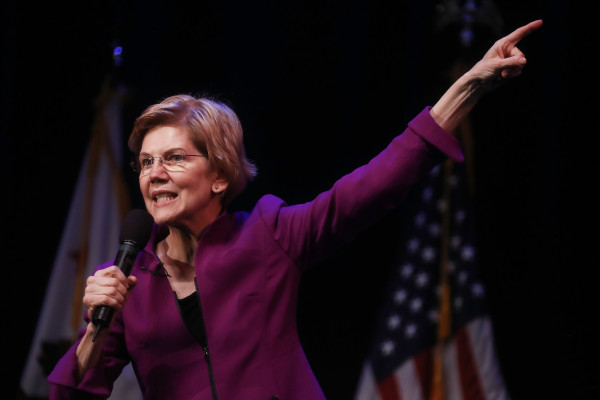 In a move to correct the imbalance of power between technologically sophisticated corporations and the lawmakers who regulate them, presidential candidate Senator Elizabeth Warren is proposing that Congress reinstate the Office of Technology Assessment.

It’s a move that gets deep into the weeds of how policy making in Washington works, but it’s something that Warren sees as essential to leveling the playing field between well-paid corporate lobbyists who are experts in their fields and over-worked, under-staffed congressional members who lack independent analysts to explain highly technical issues.

“Lobbyists are filling in the gaps in congressional resources and expertise by providing Congress information from the perspective of their paying corporate clients. So let’s fix it,” writes Warren.

It’s one of the key planks in Warren’s latest policy proposal and an attempt to tip the scales against corporations and their lobbyists. With the move, Warren clearly has her eye on technology companies and their representatives, who often are the very people congressional lawmakers rely on to explain how rule-making would impact their industries.

“[Members] of Congress aren’t just dependent on corporate lobbyist propaganda because they’re bought and paid for. It’s also because of a successful, decades-long campaign to starve Congress of the resources and expertise needed to independently evaluate complex public policy questions,” Warren writes.

“For every bad faith actor in Congress bought off by the big banks, there are others who are genuinely trying to grapple with the technical aspects of financial reform. But as the issues facing Congress have grown more complex, resources to objectively and independently analyze them have been slashed. Republicans eliminated an independent office of experts dedicated to advising Congress on technical and scientific information,” the Senator says.

The lack of independent analysis stymies congressional oversight in areas from banking and finance reform, to the oversight of technology companies, to the potential to effectively pass laws that will respond to the threat of climate change. Committees that oversee science and technology have seen their staff levels fall by more than 40% in the past decade, according to Warren, and staff salaries have failed to keep up with inflation, meaning that policymakers in Washington can’t compete for the same level of talent that private companies and lobbyists can afford several times over.

Sen. Warren saw this firsthand when she worked at the Consumer Financial Protection Bureau.

“Financial reform was complicated, and the bank lobbyists used a clever technique: They bombarded the members of Congress with complex arguments filled with obscure terms. Whenever a congressman pushed back on an idea, the lobbyists would explain that although the congressman seemed to be making a good point, he didn’t really understand the complex financial system,” she writes. “And keep in mind, the lobbyists would tell the congressman, that if you get this wrong, you will bring down the global economy.”

The inability of lawmakers to understand basic facts about the technologies they’re tasked with regulating was on full display during the Senate hearings into the role technology companies played in the Russian interference in the 2016 election.

Issues from net neutrality to end-to-end encryption, or online reklam- to the reduction of carbon emissions, all rely on Congress having a sound understanding of those issues and how regulation may change an industry.

Right now, it’s a case of which multibillion-dollar company can buy the best lobbyists — as is the case with Alphabet and Yelp or Facebook and Snap.

Under the auspices of Warren’s anti-corruption plan, the senator is calling for the reinstatement and modernization of the Congressional Office of Technology Assessment, a significant increase to salaries for congressional staffers and stronger funding for agencies that support congressional lawmaking.

The OTA was created in the seventies to help members of Congress understand science and technology issues that they’d be regulating. Over the tenure of the agency, it created more than 750 reports — including two landmark studies on the impacts of greenhouse gas emissions and global warming in the 1990s, which brought it to the attention of conservative lawmakers, who defunded it in 1995.

At the time, House Speaker Newt Gingrich, said the agency was “used by liberals to cover up political ideology.”

Under Warren’s plan, the OTA would be led by an independent director to avoid partisan manipulation. The newly re-formed agency would have the power to commission its own reports and respond to requests from lawmakers to weigh in on rule-making, help congressional legislators prepare for hearings and write regulatory letters.

Money for the increased activities of the agencies would come from a tax on “excessive lobbying.” The goal would be “to reverse these cuts and further strengthen support agencies that members of Congress rely on for independent information,” according to the Warren plan.

“These reforms are vital parts of my plan to free our government from the grip of lobbyists – and restore the public’s trust in its government in the process,” Warren writes.

Den 1 december 2021, Google announced on Twitter that a Product Review update would be rolling out that would focus on English language web pages.