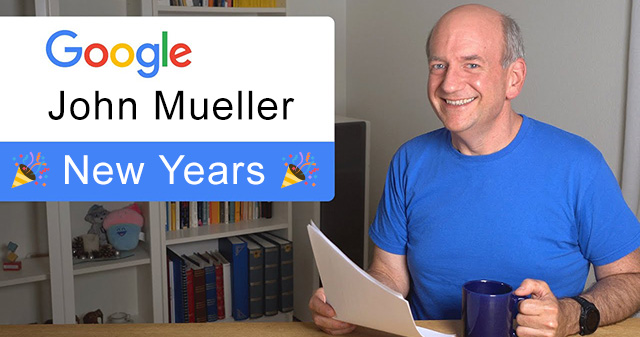 As expected, John Mueller av Google was at it again on New Years eve and New Years day – helping SEOs and site owners with their Google Sök och SEO issues. Like on Christmas Eve 2021, John also did a video hangout on New Years eve, plus he was on social responding to questions throughout New Years.

Here is the video from John on New Years Eve with SEOs and site owners:

Here is some of his other responses on New Years:

Thanks for dropping in, Alan! It was great to hear from you there.

I use a fixed-focus lens on my webcam, so zoom is not possible.

Thank you for dropping in and for covering these sessions!

Do you have some examples of what you’re looking for?

If Googlebot can’t see them, there’s not much we can do.

Idk , what does your coupon site do that others haven’t done in the past 10 years?

I suspect the main problem is that these coupons are commodity items, and everyone can just have the same as others. If you want to stand out, you’re going to have to do *a lot* more than be active in “the niche”. There’s money to be made, people have worked very hard already.

What can I say … I’m pretty sure there’s more involved than mental illness when it comes to indexing.

From a practical POV how would a search engine know which language a page is in before indexing it?

a ghostwriter has no name https://t.co/YMY2Xp7L1z


Google updated the Discover reports in Google Search Console to improve accuracy. Google sued some of the companies that impersonated Google and tried to scam small businesses by claiming their Google Business Profile. Google AdSense launched new side rail ads. Google is testing a new maps interface within Search. Google now says the URL language does not need to match the content language.