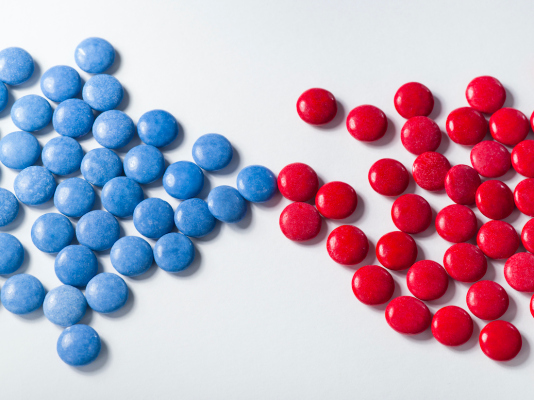 Bernard Moon is co-founder and partner at SparkLabs Group, a graduate of Columbia’s School of International and Public Affairs and is an alumni of the Coro Fellowship.
Fler inlägg av denna bidragsgivare

After Election Day, NPR, The Washington Post och various blogs described America as bitterly divided or on the brink of civil war. These were by the same journalists, pundits and intellectuals who only know how to sell fear.

“They want to take away your guns!” and “They want to take your children away!” were their cries, while praising BLM’s protesters on one screen and promoting videos of the infinitesimal number of rioters on another.

The Atlantic speculated about widespread violence depending on the outcome, but I never believed these seemingly well-researched reports that have become commonplace in our clickbait-driven world. And as we saw, nothing of real concern happened; instead of violence, there were relatively small protests and dancing in the streets.
The gap that supposedly divides our nation is narrower than the doomsaying pundits, intellectuals, politicians and cause leaders want you to believe. Why do they want you to believe this? Because promoting division and conflict sells and grants a perverse glue that unites people within their tribal communities. Behind these labels of conflict are seeds of fear that can grow into irrational fears. Fears without reason, fears beyond facts. Sometimes these fears become things we hate  —  and our society and nation should have no place for hate, because it is an unproductive emotion without any possible positive outcome.

I’ve learned to ignore much of the headline-driven news and social media echo chambers where ridiculous ideas fester across our political spectrum. There are obviously ridiculous ideas, such as QAnon, but the subtly ridiculous ideas can be more dangerous and potentially even more destructive. These ideas can be diminished by simple questions to the average reasonable person.
One idea spawned in some progressive echo chambers was the notion that Trump would stage a coup d’état if Joe Biden won the election (i.e., “Did you see those unmarked federal police!?” which signaled to some that a coup was coming).

A basic element of a coup d’état is military support or control, which obviously Trump did not have. I would ask basic questions around this idea, but always ask the rhetorical question, “Do you know how difficult it is to conduct a coup d’état?” Meanwhile, in some conservative echo chambers, a similar concern made rounds that “defund the police” was an effort to install a “federal police force” that Biden would control once in the Oval Office. So there really isn’t much original thought inside the echo chambers of America.

Maybe both sides with such fantasies recently watched that Patrick Swayze classic, “Red Dawn,” where a tiny militia of high school students held off the combined forces of the old Soviet Union and Cuba. Or maybe they saw “300,” in which Sparta’s army held off more than 300,000 invaders. After watching either of these inspirational movies, I might possibly believe such a militia or “federal force” could overpower the whole might of the U.S. military. Ahem.

For those warmongers and soothsayers warning of civil war, where do they want the country to go? Static echo chambers of America, or a vision of suburban folks with pitchforks and handguns versus urban dwellers carrying machine guns and Blue Bottle coffee mugs?

Since the level of violence after the election did not in fact match the crystal balls of these oracles, the definitions and terms have of course changed. As Bertrand Russell stated, “fear is the main source of superstition”  —  to which I would add that fear is also the source of really stupid predictions and ideas.
And let’s be clear that while I do criticize the echo chambers of social media, they are only tools of promotion, because echo chambers are not limited to the online social media. Echo chambers can be homes, bars, lodge meetings, yoga studios and Sunday bridge clubs. The enablers are the pundits, intellectuals, politicians and cause leaders that seed these ideas.

Conspiracy theories, misinformation and outlandish statements were quite capable of spreading before the recommendation engines of Facebook and others were fully developed. For example, in 2006, over 50% of Democrats believed the U.S. government was involved in the 9/11 terrorist attack. More than half of registered Democrats believed in this conspiracy theory! And let’s not forget the Obama “birther” conspiracy, where at least 57% of Republicans continued to believe that President Obama was born in Kenya even after he released his birth certificate in 2008.

But today, Facebook, YouTube, Twitter and other social media sites have become extremely powerful accelerants for such provocative ideas and strange fictions. Tristan Harris, co-founder and president of the Center for Humane Technology, was recently featured in the Netflix documentary “The Social Dilemma,” where he discussed how social media tends to feed content to retain people’s attention and can spiral downward.

This can become an abyss of outright misinformation, or — even more importantly in my estimation — for subtle, ignorant ideas, such as coups d’état and civil wars. And those destructive ideas and irrational conspiracy theories from the 2000s that probably took months to spread, are now supercharged by today’s social media giants to infect our society in a matter of days or weeks.

The fabric of our nation was delicately woven, but after countless turns of the loom between conflicts and enlightenment, our country has proven itself extremely resilient. Indestructible beyond today’s calls for racism and ignorance, for anarchy and destruction, and for civil wars.

Biden is our President-elect with a mandate to lead our nation beyond this divide  —  a divide that I believe has been overstated. Many citizens met in the middle to provide Biden with a mandate to bridge the gap. The “blue wave” didn’t occur and House Republicans gained 10 seats, which means many Republicans and independents voted “red” down-ballot but also voted for Biden.

Trump had the largest number of minority votes for a Republican presidential candidate in history, including from 18% of Black male voters  —  and that number would have been much higher pre-pandemic. I see all of this as a positive, because our citizens are not voting party line or becoming beholden to one party.

In reality, many of the major issues that supposedly separate us are much closer than we know. For example, I’ve sat down behind closed doors with a senior adviser on healthcare for a major Republican leader, who stated that Obamacare isn’t far off from what they were planning. The difference was that their plan was more small business friendly and their cost savings would be among the younger demographic. I also sat down with a senior adviser for Obamacare, who explained that they believed it wasn’t sustainable unless the cost savings were for those 65 and above. So the differences on such critical policies are not miles apart but only steps away from each other. Although at times politics are about credit and conflict, hopefully such differences can be resolved in the near future.

I hope this election will change the temperament of our nation and its citizens. I hope it will lead more people to ignore the tactics of both political parties and organizations seeking their attention and support. Their shortsighted methods should be cast away like the relics of the past and conflict should not be the tool of this new America. Instead, let’s focus on productive dialogue to find common ground, and thoughtful, practical policies to move our nation forward.