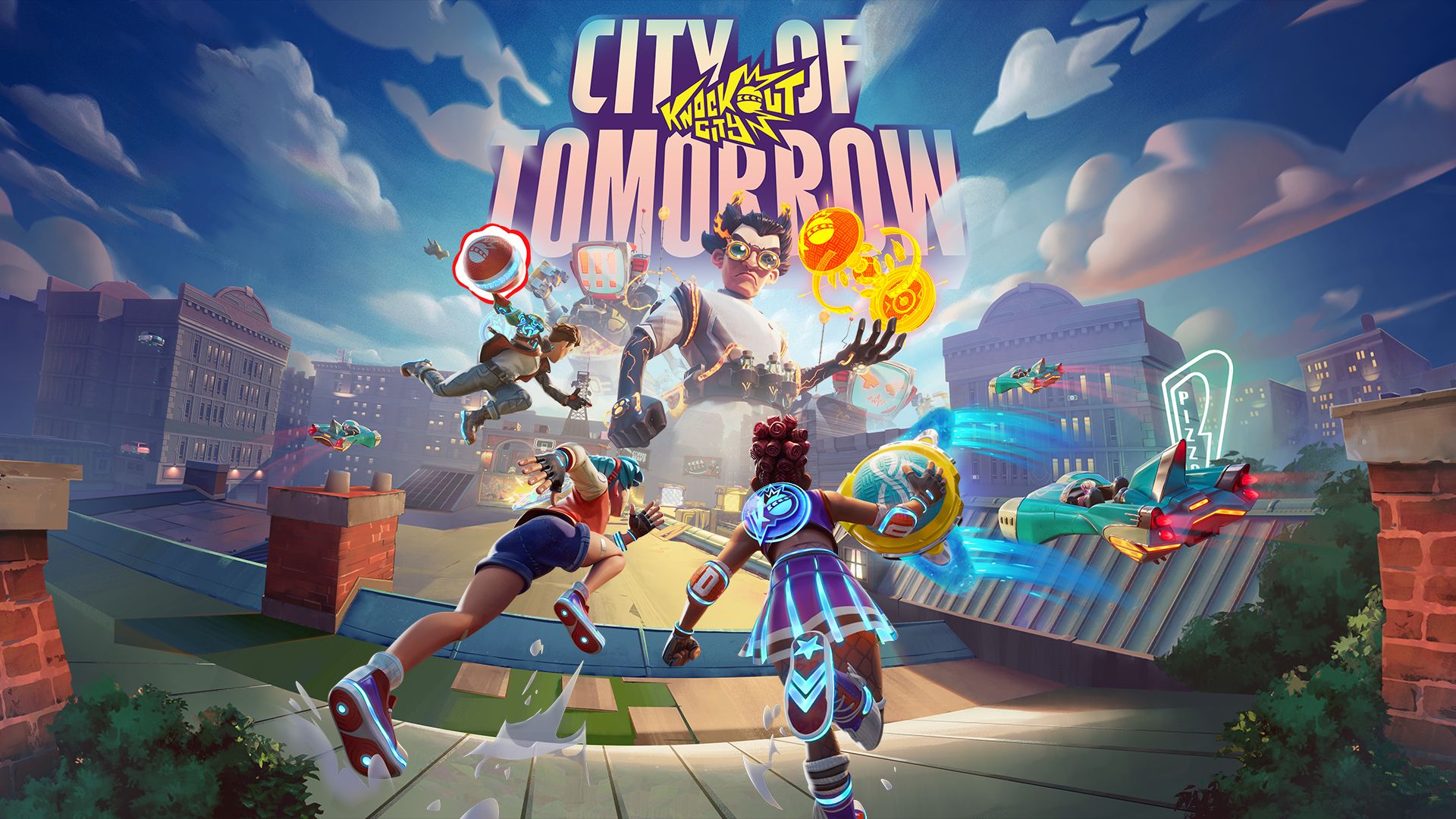 Gaze upon the city of the future, brawlers! Everything the light touches… can be pelted with dodgeballs. I’m Lynn Richter, Community Manager for Knockout City and I’m here to welcome you to Knockout City Season 6: City of Tomorrow. You’re right on time, because we’ve made Knockout City free to play for everyone! Pass me the ball, will ya? I’m ‘bout to show you around.

Here in Knockout City, each player has a special space to call their own. We call it the Hideout, and it’s where you’ll spend time with your Crewmates, kicking back and testing out your new moves in between matches. Practice your catching skills with the Target Dummy, where you can close your eyes and listen for that exact moment to score a Perfect Catch, which will grant you Overcharge to speed up your next throw. Or, invite your Crewmates to join you and pair up to develop new strategies.

In preparation for Season 6, we headed down to Hideout Depot, and invested in some new improvements that will help make your Hideout an even better place for you and your friends. Each person’s Hideout will display their chosen Crew Banner proudly for all to see. Take a moment to explore by twirling, and leaping your way around the buildings, signs, and ledges around the Hideout and you’ll discover brand new spaces that were previously out of reach.While you’re investigating, be sure to spot the new sign for the Knockout City Chronicle, and let that be your reminder to tune in when it drops for the best Knockout City community news!

Invite your friends over, and play some hoops! Basketball hoops are now positioned throughout, which will give you a celebratory explosion when you land a slam dunk. Then, head on over to the brand new rooftop space, complete with a soccer field, where you and your buddies can skirmish in between brawls. First team to three goals wins!

When you’re ready, kick back to some brand new tunes playing from the Jukebox! You’ll find new tracks available in the Brawl Shop, as well as some hot new remixes! There’s so much to do in the Hideout now—we’re excited to call it home.

Head toward the Target Dummy and join this group of folks trying out our brand new ball, designed by the dodgeball savants at Perennial Labs. Now, I forgot what I was about to tell you about it, but if you wait a moment, I’m sure it will come back to me. Heh.

This season, never forget where you put your Boomerang Ball, because it’s gonna keep returning time and time again. I’m not sure what powers this thing, but it never runs out of juice. To use it, simply throw it at a person, or any surface, and watch it return!

And you better watch it, because if you miss your catch when it comes back, you’re gonna get knocked back a bit. You won’t take damage, but you’ll need a moment to compose yourself. Besides, you’re just going to look cooler when you can land a hit, catch the return and keep right on brawlin’. You’ll also notice that every time you land a perfect catch, you’ll gain a level of Overcharge. But don’t get sloppy or your opponents can catch it and use all that stored energy against you!

Let’s hear it for the return of the Brawl Pass, an exciting way to earn up to 100 additional rewards in a Season by earning XP and completing Brawl Pass Contracts! And you’re going to want to put in the work to earn XP and complete those Brawl Pass Contracts because it’s the only way you’ll hear the story that unfolds in the Deep Space Dispatches. Each Season, the DSD transmits a brand new broadcast to all brawlers over the Pirate Radio signal, broadcasted by our eye in the sky—the former-brawlin’, shotcallin’ DJ on the Moon. This season boasts the most gripping story yet, so start taking notes as Holo-caster Kat Hunter sets out to interview individuals competing for the Scientist of Tomorrow award, but instead finds herself uncovering a great mystery.

Okay brawlers, gather around for an Emergency Meeting. We’ve found some suspicious-looking folks hiding in the levels 3, 13, 23, and 33 of the free version of the Brawl Pass. Make sure you know who to trust before equipping your rewards or you’re gonna feel real DUM when you get pelted by an impostor.

Cash in 950 Holobux to unlock the Premium version of the Brawl Pass, which gives you access to earn all 100 items it contains. Work your way all the way to the top and earn the right to have your balled up self carted around the field in the Mecha Brawler Legendary Outfit, looking down on your foes from your lofty perch.

Can It Be (the City of) Tomorrow Already?

We can’t wait to throw open the gates and welcome brawlers new and old to the City of Tomorrow! There’s so much more in store, which you can check out on our Roadmap!

Get hyped for Heroes Reborn, Royale Party and the coolest event of the summer: Heatwave 2022!  While you wait, join us and keep the hype going in our official Discord, where we’re counting down the minutes until we can meet you on the field! Until next time, brawlers!

• Frantic and Fun — Rule the city through lightning-fast multiplayer matches featuring mind-blowing dodgeball mechanics. Increase your attack by passing to power up dodgeballs, targeting your opponents with a variety of specialized balls, or “balling up” at any time to get thrown by teammates!

• Crew Up — Assemble an All-Star dodgeball Crew with your friends for multiplayer matches in a seamless cross-play experience! Together, knock out opponents in 3v3, 4v4, or free-for-all matches. Pass, throw, and strategize to dominate as a team and unlock distinctive, Crew-only rewards!

• Define Your Style — Show off your status and unique look through character and Crew designs with expansive character creation options. Customize your appearance, gear, and attitude, from body type and hairstyle to a custom glider and Crew vehicle to win, lose, and taunt animations.

• Take On Knockout City — Battle it out with other Crews across dynamic maps all over the city. Each map’s special features make every match an intense, unexpected experience. Dodgeball thrives in back alleys with pneumatic tubes, on skyscraper rooftops, across busy streets—and even at the local burger joint and construction sites. While you’re dodging dodgeballs, watch out for moving cars, rooftop drops, and even a wrecking ball or two.

• Strikingly Fresh Yet Familiar — It’s easy to pick up and play thanks to familiar controls, but practice is key to becoming a champion. On a level playing field, only the most skilled ballers stand out from the crowd. Use your knowledge to master the intricacies of the game for spectacular KOs.

Holobux you purchase from the Microsoft Store can’t be transferred to or used on other platforms.
Limited free trial capped at level 25. Trial is subject to change. Internet connection, EA account and acceptance of EA User Agreement (terms.ea.com) & Privacy and Cookie Policy (privacy.ea.com) required to play. Trial can be played once per EA account.
CONDITIONS AND RESTRICTIONS APPLY. SEE WWW.EA.COM/LEGAL FOR DETAILS.
© 2021 Velan Studio, Inc. EA and the EA logo are trademarks of Electronic Arts Inc. Trademarks are the property of their respective owners.
Buy the Xbox Series X|S version and get the Xbox One version (Digital Standard or Deluxe Editions) for no additional cost.

Advertisement
Related Topics:CityfutureKnockoutseasontomorrow
Up Next