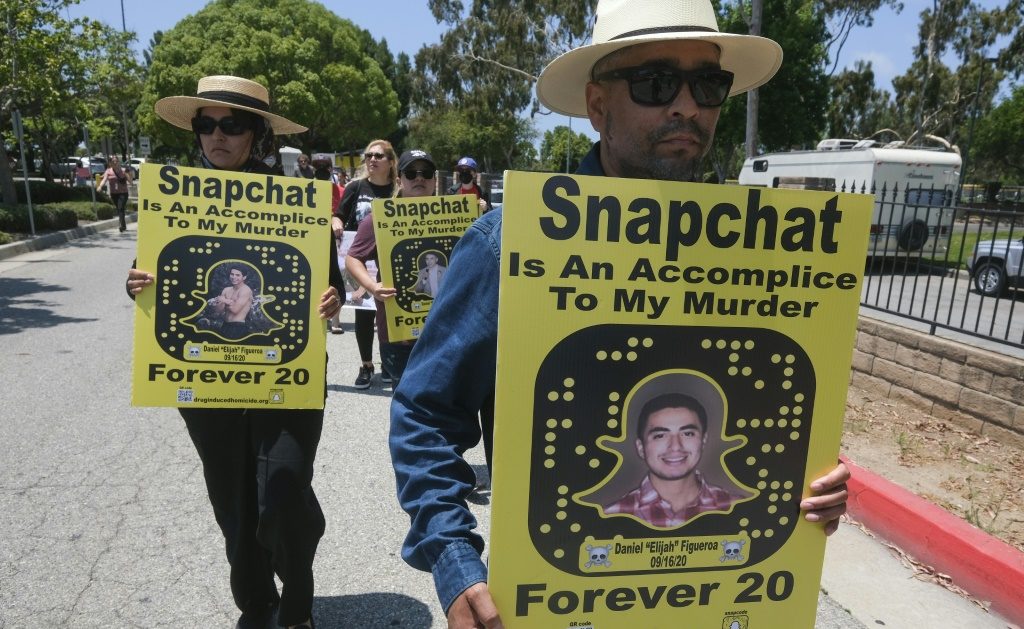 Protesters march in front of Snapchat headquarters in Santa Monica, California on June 13, 2022 demanding social media companies to block the sale of drugs on their platforms – Copyright AFP RINGO CHIU

Families of teens who died after overdosing on drugs they bought through Snapchat and other social media platforms called Monday for tech firms to do more to address the problem.

Sam Chapman, part of a group that staged a protest Monday in front of Snapchat’s Santa Monica headquarters, told AFP his son died in February 2021 after a pill he purchased through the platform was laced with the extremely powerful opioid fentanyl.

“I’m here today to warn people about the dangers of social media, delivering drugs and other criminal acts into the lives of our families, through our children,” said Chapman, 57.

His son Sammy would have celebrated his 18th birthday last weekend.

Chapman described the horrific scene of finding his son dead on the floor in his bedroom, in what he said was called the “fentanyl death pose.”

“He had stopped breathing and fell backwards in his chair and vomited, and he choked on his own vomit… It’s a very common way of going,” said Chapman.

Of the 107,000 overdose deaths recorded last year in the United States, 70 percent were caused by “fentanyl poisoning,” which is now the leading cause of death for Americans aged 18 to 45, according to the groups backing Monday’s protest.

Chapman said a drug dealer had contacted his son on Snapchat, and sent him a “colorful drug menu with pictures.”

“At the bottom it said that he delivered. And so he connected with our son and delivered the drugs to our home after we were asleep, like it was a pizza,” he added.

Like the other victims’ family members, Chapman is calling on Snapchat and other social media platforms geared toward young people to take stronger action against drug sales.

“We have been working tirelessly to help combat this national crisis by eradicating illicit drug dealers from our platform,” a Snapchat spokesperson told AFP.

“We use advanced technology to proactively detect and shut down drug dealers who try to abuse our platform, and block search results for dangerous drug-related content,” the representative added.

But Chapman said the tools currently in place do not work because dealers use emojis and code words that aren’t blocked.

The group Victims of Illicit Drugs (VOID) is demanding US law to be updated so that social networks are held liable for what happens to their users on their platforms.

“If you’re walking in a grocery store, you slip and fall, you can sue them,” said VOID president Jaime Puerta.

“The legislators had no idea of where the internet would be today.”

Meta, TikTok, Google and Twitter All Preparing to Sign-On to New Misinformation Rules in Europe

This could help – over the last week, Instagram has been giving more users access to its Reels ‘Templates’ option, which enables you to create Reels based on popular content formats in the app.

As you can see in this example, shared by user Ahmed Ghanem, some people are now seeing the new ‘Templates’ option within the Reels camera, which enables you to select a format for your Reel based on popular trends.

Instagram initially launched its Templates option back in April, which takes users through a frame-by-frame process to create a similar-looking Reels clip.

So if you lack creativity, now Instagram will do the creative framing for you, which could be handy, as a means to create more engaging clips.

But it could also make a lot more of your Reels feed look familiar, due to replication of the same types of clips over and over again, while it also leans on the talents of trendsetters within the app. Which TikTok has come under scrutiny for in the past, and it’ll be interesting to see whether creators start to question the re-use of their formats in this way.

But if you do need help, maybe it’ll come in handy – and that’s not the only way that IG is looking to lend a guiding hand in the Reels creation process.

According to another discovery by Ghanem, Instagram will also now recommend songs for your content, based on your upload.

How, exactly, Instagram recommends different songs for different clips is not clear, but based on these tools, you could essentially extricate yourself of almost all your creative content decisions – you just come up with what you want to film and Instagram’s recommendation tools and templates will do the rest.

Which seems to run counter to the whole ethos of the short-form video trend, which enables users to contribute to the latest trends and memes with their own, simple, creative takes. Indeed, what people like most about short-form content is that it provides more avenues for creativity, which makes these new features feel less genuine, and less interesting, even if they do help you get a few more Likes as a result.

Which they probably will, and for brands that are short on time, and are unable to keep up with the latest formats and tracks, they could be a big help (note: business accounts are limited in terms of what songs they can use in their clips).

But I don’t know. It feels a bit artificial, doesn’t it? Like, Meta is so keen to get as many people as possible posting short-form clips that it’s taking all of your own input and personality out of the process.

Maybe I’m over-thinking it – and really, what I am thinking is that someone should create an account that only posts videos using templates and song recommendations to see what sort of engagement it gets.

It could be massive – but it also feels like another step towards killing off the short-form video trend entirely by doing it to death.

Much like Stories before it – and, ultimately, that could be another way for Meta to negate competition.