Snapchat is taking the next steps into digital fashion with the addition of new 3D Bitmoji avatars, adding another dimension to the popular virtual character depictions available within the app.

As reported by The Hollywood Reporter, the new 3D Bitmoji characters will include over 1,200 different combinations of facial expressions, poses, backgrounds and gestures, enabling Snapchat users to create more personalized depictions of their virtual selves.

Which, as noted, is important for its expanded digital fashion push, which has already seen Snap partner with various fashion brands on buyable, virtual items that they can adorn their Bitmoji characters with.

As explained by Ba Blackstock, CEO of Bitmoji:

“It’s not just about having an avatar [where] you have a picture of yourself – that’s pretty easy. It’s more about what can you do with that avatar? What part does it play in your digital life?”

Increasingly, Snap sees Bitmojis playing a more significant part in the online Metaverse, a digital alternate reality of sorts, where each person can choose their own depiction of themselves, in various capacities.

Given that an increasing amount of our interactions are now taking place online, it makes sense to facilitate an environment entirely aligned to this, and the Metaverse concept is that you’ll soon conduct more and more of your daily activities in virtual form, which will also mean that customizing your character with buyable items will, eventually, become a common practice.

Which is where Snap sees significant business opportunity, and as you can see, it’s already moving into digital brand sponsorships, which, over time, will also see Snap partnering with a broader range fashion retailers to provide shoppable Bitmoji versions of their items. 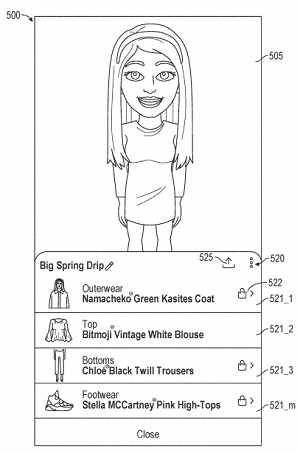 That will facilitate in-app purchases, while Snap could also look to enable custom creation tools that can translate virtual fashions into real-world, buyable items as well, establishing more linkage between your on and offline presence.

It may seem like a strange concept, but it’s increasingly gaining traction. And with more than 70% of Snap users already linking their Bitmoji avatar to their account, and more fashion brands coming on-board to join the push, it could be a prime opportunity for Snap to facilitate enhanced brand connection in its apps, and generate more income through sponsorships and in-app purchases.

That’s particularly relevant when you consider the younger skew of Snap’s audience, who are generally ahead of the latest trends. And as digital clothing catches on, and more youngsters move from custom characters in Roblox to digital depictions of their adult selves, you can bet that they’ll also become more accustomed to spending money to dress up their virtual avatars.

Snap could well be at the forefront of that shift, which may prove very valuable, both for Snap’s business interests and for brand marketing processes.

Snap’s new 3D Bitmoji are being rolled out to US users from today.