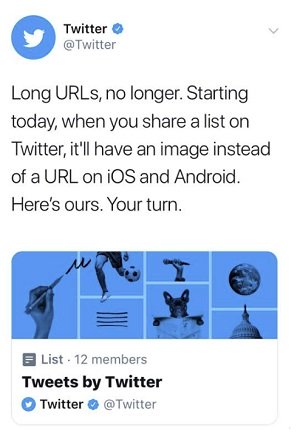 Twitter has added two new features for Twitter Lists as part of its focus on providing more options to improve content discovery, and get users more engaged in relevant, on-platform discussions. 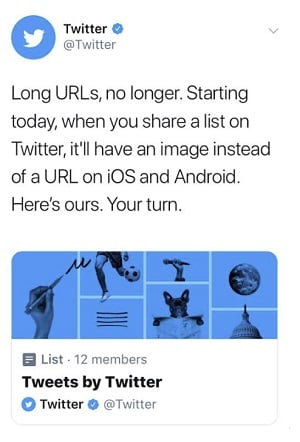 As you can see here, the new option will add an image and title link card, which comes in a range of basic colors:

At present, you can’t customize the included image – you get whatever Twitter’s system auto-generates when you share your list – though Twitter is also considering new options which could further enhance these links.

It’s not a major change, but it adds to Twitter’s lists offering, which Twitter has been working to better utilize throughout the year.

In addition to this, Twitter’s also adding in some new recommendation tools to provide guidance on who you should add to your lists.

“When creating or adding people to a list on iOS, you’ll see suggested accounts to add based on the list’s title or who’s already on it.”

Again, the updates are not major, but they add a little more to Twitter lists, which have long been an underappreciated feature, and can help improve tweet discovery and engagement.

This has long been a criticism leveled at the platform – while 145 million people log onto Twitter each day, many non-users find the tweet process intimidating, with the shorter communication style and relatively limited search tools making it hard to know who to follow, and how to get the most out of the experience. And given that Twitter is more about following interests, as opposed to family and friends, bridging that initial gap between starting out and becoming an engaged, active user is a key challenge, which Twitter is now working to address through the increased focus on lists, and more recently, the addition of an option to follow topics instead of users. 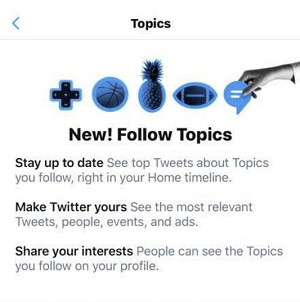 These tools, ideally, will help Twitter expand its user base. As noted in its most recent performance update, Twitter has only added four million new mDAUs in the North American region over the last year, while it’s added more than 4x that in other parts of the world. Features like Topics and list sharing may not be a major deal in western markets, where Twitter is more established, but in regions less familiar, they could be key.

Or not. It’s also possible that these new options will fail to catch on, and not add anything much to the broader Twitter experience. But lists, as noted, have always held a lot of potential, and giving them more focus seems like a positive step.

5 Tools to Find Your Audience on Paid Social Platforms