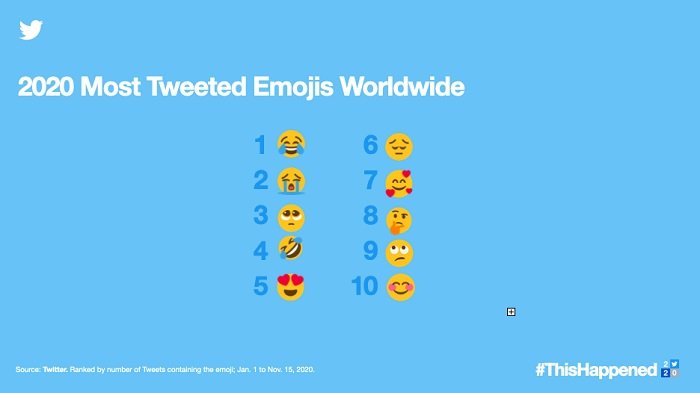 It appears that emoji-style reaction buttons are indeed coming to your tweets, with the platform continuing to work on its new icons, according to the latest finding by reverse engineering expert Jane Manchun Wong.

The new options, at this stage, will be:

Those specific responses have likely been chosen based on platform use, with Twitter’s research showing that the ‘laughing while crying’ emoji, and the ‘crying face’ were among the most used within tweets in 2020.

This new response selection appears like an amalgamation of these trending emojis, which could provide more ways to quickly respond to tweets, especially while on the go, while also aligning with reaction usage on other social platforms, leaning into broader habitual behaviors.

The new test is not really a huge surprise, with Twitter working on its potential emoji response options over the past few months.

TechCrunch reported back in March that Twitter had been surveying users about the potential of adding a broader set of emoji-style reactions on tweets, giving people more ways to quickly engage in the app.

As you can see here, that could also end up including a form of up and downvotes, with ‘Agree’ and ‘Disagree’ arrows – though based on this latest example, Twitter doesn’t appear to be going with that iteration.

Twitter actually launched a brief test of similar emoji response tools back in 2015, and up and downvote options in 2018, but it never went ahead with any of those tools.

Now, this new version does look to be getting closer – we asked Twitter for comment on the test, and it provided us with a generic response.

Which is a tacit confirmation that this is in testing, without providing any indication of any future live experiments or eventual roll-out plans for the functionality.

But it does look to be evolving, which could add a whole new range of considerations within your tweet process, and a whole new set of data points for Twitter to provide insight into user responses to each tweet.

Which could be good – but then again, Twitter users are not known for their welcoming reception to changes in the app.

Remember the furore when Twitter changed the favorites star to a heart instead?

I mean, the Twitter rage cycle is fairly short, so immediate response is probably not the biggest concern in this respect. But if these things do raise your hackles, going on Jane’s track record for discoveries that later get launched within each app, I’d say you should start priming those hackles for elevation.