Amid varying concerns around how information is shared online, and the role that social networks, specifically, can play in influencing public opinion, more governments are looking to shut down or limit internet access at times in order to control or manage certain narratives.

And apparently, such instances are on the rise – according to a report from Access Now, there were 213 documented internet shutdowns in 2019, with 116 of those officially recognized by the relative authorities, up from 81 in 2018.

That’s a concerning trend, especially when you consider the importance of access to information amid an event like COVID-19.

Acknowledging this, Twitter has this week put its support behind the KeepItOn campaign.

“#KeepItOn is a coalition of more than 200 organizations – ranging from research centers to rights and local advocacy groups, detection networks, and media organizations – located within 75 countries around the world, fighting to end Internet shutdowns globally.”

Twitter will look to help amplify the messaging of KeepItOn with a special hashflag emoji which will be automatically added to tweets that include the tags #KeepItOn and #InternetShutdowns. 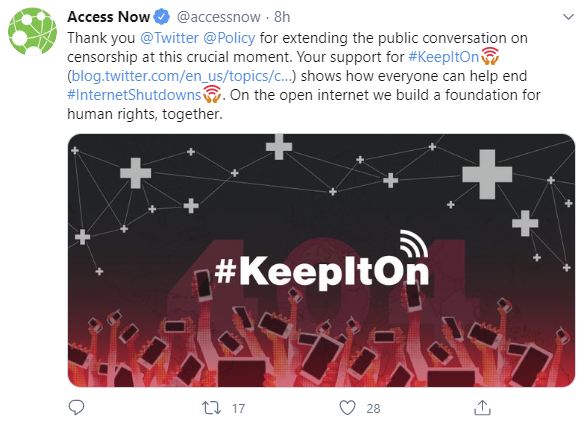 “Twitter’s mission is to serve the public conversation. We are committed to protecting freedom of expression, while encouraging healthy and productive public conversations. Having access to the free and open Internet is a right that many have come to see as essential. It is a right that’s increasingly inseparable from free expression, self-determination, and self-actualization.”

Twitter also notes that there have been varying shut downs in recent months, partly tied into COVID-19, which could set dangerous precedents for the future of free access, which is why it’s chosen to provide more support for KeepItOn now.

Definitely, this is an area of concern. Research suggests that around 3.5 billion people can’t access the internet at all, contributing to global inequity, while restricting such in regions where internet access is available can only further exacerbate such concerns. And that’s before you consider the power that governments can wield when they control the flow of information.

Unchecked, this could become a major problem, so it’s important that organizations like KeepItOn do continue to push back against such moves.

You can learn more about the KeepItOn campaign here.