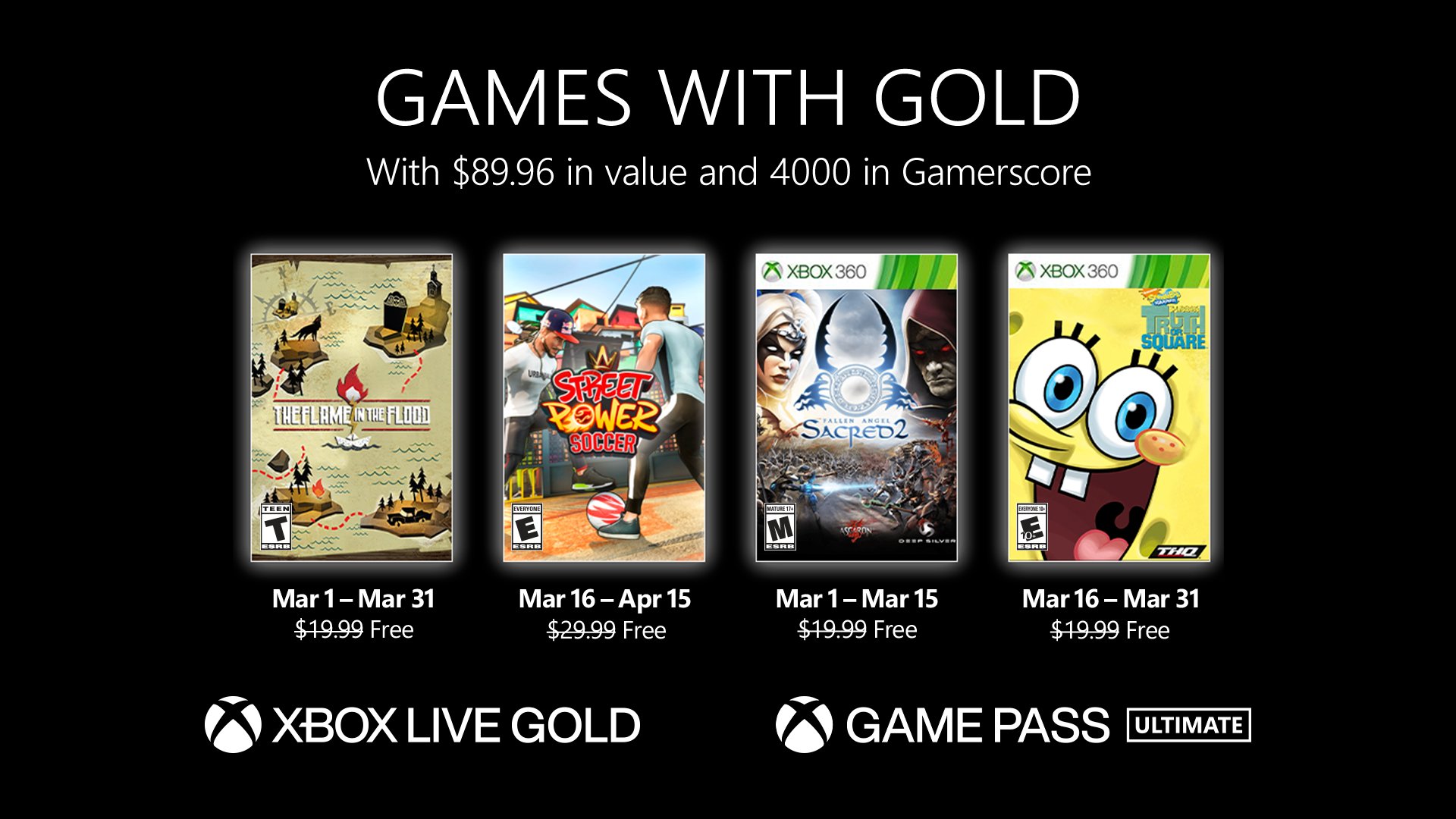 It’s time to announce the March Games with Gold lineup! On Xbox One and Xbox Series X|S, trek through post-societal America in The Flame in the Flood and show off your moves in Street Power Soccer. For our classic lineup via Backward Compatibility, embark upon Light or Shadow campaigns in Sacred 2 Fallen Angel, and search for the lost Krabby Patty secret formula in SpongeBob’s Truth or Square.

Xbox Live Gold members will have exclusive access to these games for a limited time as part of Games with Gold. So will Xbox Game Pass Ultimate members, who receive all the fantastic benefits of Gold plus access to over 100 high-quality games with Xbox Game Pass.

The Flame in the Flood
A girl and her dog journey on foot and by raft through the backwaters of a forgotten post-societal America. Scrounge for resources, craft tools, remedy afflictions, evade the vicious wildlife and, most importantly, stay healthy in a dangerous wilderness.

Street Power Soccer
Show off your sick style in this quick action-packed version of the beautiful game. Try tricks, over-the-top game modes and playgrounds, and unleash your soccer superpowers. Face off against street legends or your friends in a game to determine who will claim the crown of the Street King!

Sacred 2 Fallen Angel
Choose to embark upon Light or Shadow campaigns to help heal the land of Ancaria or intensify the chaos. This game world seamlessly blends solo and multiplayer gameplay, and is packed full of quests, characters, adventure, and deadly combat.

SpongeBob’s Truth or Square
SpongeBob has lost the Krabby Patty secret formula. With your help and the help of some Bikini Bottom buddies, SpongeBob must use Plankton’s memory machine to retrace the happiest moments of his life and find the formula.

Read more about our Games with Gold program here and stay tuned to Xbox Wire for all the latest news on Xbox. Like we said before, if you’re an Xbox Game Pass Ultimate member, you get all the benefits of Xbox Live Gold, over 100 high-quality games you can play on console, PC, and mobile devices with cloud gaming (where available), and access to EA Play at no extra cost. New games are added all the time, so you’re never without something new to try when you’re looking to find your next favorite game. If you’re new, or if you’re an existing Xbox Live Gold and Xbox Game Pass for Console member, join or upgrade today for just $1.