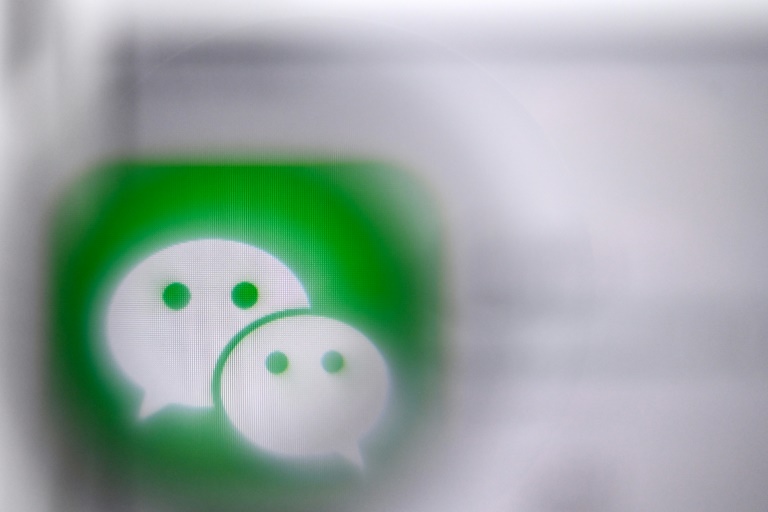 Human rights activists and some academics in China have had their WeChat messaging app accounts restricted in recent weeks, multiple people affected have told AFP, as Beijing cracks down on dissent before the Winter Olympics.

China hopes to make next week’s Games a soft power triumph, although the lead-up has seen some Western powers launch a diplomatic boycott over Beijing’s rights record and cybersecurity firms warn athletes of digital surveillance risks.

For China’s ever-dwindling community of activists, the imminent arrival of the world’s best athletes has triggered a familiar clampdown.

Eight individuals told AFP that their WeChat accounts had been restricted in some form since early December, with some unable to use their accounts entirely and forced to re-register.

The restrictions came as authorities detained two prominent human rights activists, lawyer Xie Feng and writer Yang Maodong, while a third rights lawyer missing since early December is believed by relatives to be in secret detention.

“This storm of shuttering WeChat accounts is too strong and unprecedented,” said veteran journalist Gao Yu, whose account had features like group chat messaging permanently disabled for the first time on December 20.

China routinely suppresses the social media accounts and physical movements of dissidents during politically sensitive periods such as Communist Party gatherings in Beijing or key anniversaries like the 1989 Tiananmen crackdown.

A major Party Congress will take place towards the end of this year when President Xi Jinping, China’s most authoritarian leader in a generation, is expected to further cement his rule with a third term.

The arrival of the Winter Olympics has presaged a clampdown similar to those surrounding other major events.

Tencent’s app WeChat is a mainstay of daily life in China, with users relying on it for a range of services including payments and scanning health codes that permit entry to public venues.

“I know many people who’ve been banned from posting in group chats or posting WeChat Moments lately,” a Beijing lawyer whose account was restricted last month said on condition of anonymity.

“Isn’t this equal to removing an individual from a public space?” said Zhang, adding she can now only send WeChat messages to individual users.

“Before and during the Olympics is a major sensitive period,” added a Beijing-based activist whose account was restricted twice in the past two months.

Tencent, the owner of WeChat, did not respond to a request for comment.

One of them, Yang Maodong, was unable to reunite with his wife in the United States before her death in early January.

Relatives of Tang Jitian, a human rights lawyer who vanished last month en route to an EU Human Rights Day event in Beijing, told AFP they believe he is being held under a form of secret detention commonly used against dissidents, possibly in his home province of Jilin.

“We don’t know where he is. I’ve reported him missing to the police but with no result,” said a relative who did not wish to be identified for fear of reprisal.

“They said it doesn’t meet the requirements for filing a (missing persons) case and that he had scanned the Jilin province health code.”

People arrested for national security offences in China can disappear for months at a time into incommunicado detention before authorities charge them or reveal their fate.

Both Jilin and Beijing’s public security bureaus did not respond to requests for comment.

The International Olympic Committee said in an emailed response that it “has neither the mandate nor the capability to change the laws or the political system of a sovereign country”, adding that it “must remain neutral on all global political issues”.

Beijing Games organisers told AFP they “oppose the politicisation of sports” and were “not aware of these matters”.

“The space for public discourse is getting smaller and smaller,” said He.

LinkedIn has announced an update to its Professional Community Policies, which dictate what’s allowed, and what’s not, within your various LinkedIn communications.

The updated policies aim to provide more insight into specific elements of in-app engagement – because people, especially women, are sick of LinkedIn being used as a hook-up site by overeager users who like the looks of their profile image.

That’s not the only reason, but definitely, reports of harassment via LinkedIn’s InMail have been rising.

As explained by LinkedIn:

“As part of our updated policies, we’re publishing a set of expanded resources for members to better understand our policies and how we apply them, including detailed examples of content that isn’t allowed and how we handle account restrictions. While harassment, hate speech, and other abusive content has never been allowed on LinkedIn, we’ve added what types of comments and behaviors go against our Professional Community Policies.”

In this updated format, LinkedIn’s new policy overview includes specific sections outlining what’s not allowed in the app, with links that you can click on for more information.

Follow the links and you’ll be taken to the relevant LinkedIn Help article on that topic, which also includes a section that shares more specific explainers on what’s not allowed in the app.

The aim is to provide more direct insight into what you can’t do in the app, and with engagement continuing to rise across LinkedIn, it makes sense that, logically, LinkedIn is also going to see more interactions that violate these terms.

And as noted, women are disproportionately targeted by such activity.

A report by CTV Canada last year found that many female LinkedIn users regularly receive inappropriate messages from men, who’ll often reach out to tell women that they find them attractive. Fast Company reported in 2020 that posts from female users are often targeted with ‘derision, marginalization and even outright hate’, despite LinkedIn being a lass anonymous platform than others, while many other women have reported similar advances or attacks by users in the app.

LinkedIn does have a specific policy against ‘sexual innuendos and unwanted advances’, which now also includes more examples of what’s not allowed.

But the fact that this is even necessary is a little disconcerting – and really, this does seem to be the main focus of this new update, providing more context around what you can’t do in the app, which is really an expansion of general workplace etiquette and ethics.

It seems like that should be a given, and that all users should be able to engage in a professional manner, but of course, as with any widely used platform, there will always be some that push the boundaries, and break the rules, especially if those regulations are unclear.

Which is what LinkedIn’s seeking to clarify, and hopefully, this new format will make it easier for people to understand what they can and can’t do in the app.

You can check out LinkedIn’s updated Professional Community Policies here.