As you can see from the video, the new Business Suite platform incorporates all of your Facebook Page and Instagram profile options into one space, and will be available on desktop or in a new mobile app.

So instead of using Pages Manager or Creator Studio, you now have yet another way to stay across all of your Facebook and Instagram business interactions – though this one does cover a lot of functionalities within a single app.

Message management is nothing new – you can get all your messages from Facebook, Messenger and Instagram in Pages Manager already, while Facebook added Facebook/Instagram scheduling to Creator Studio last year.

But then again, the integrated message inbox could be helpful within your workflow.

While the scheduling layout adds another view: 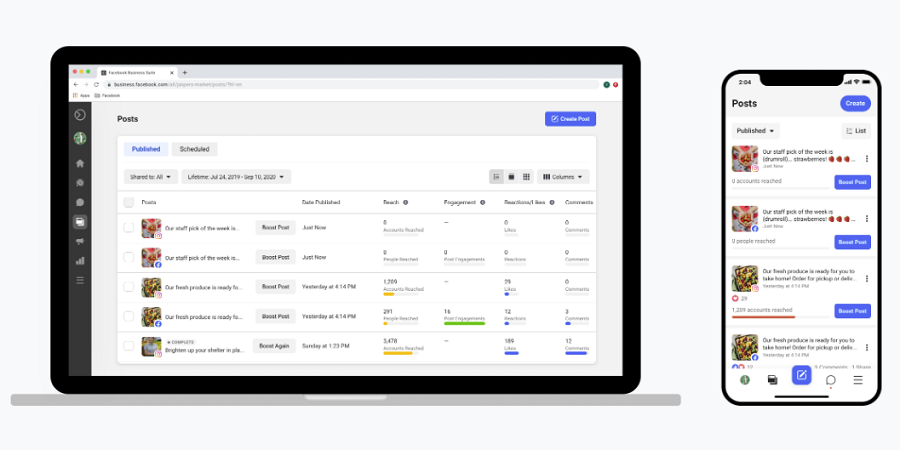 What I like most about Business Suite, however, is the layout of its analytics tab, which makes it a little easier to get a full overview of your Instagram and Facebook performance in one place.

Creator Studio also has analytics displays, but it’s more focused on video post performance, whereas this listing gives you a better, overall comparison of your Facebook and Instagram presence. That’s probably a personal preference, but I do like the layout and simplicity of this format.

And Business Suite may soon have another feature that Pages Manager doesn’t – according to Axios, Facebook is also planning to integrate WhatsApp messaging functionality into the app in the near future. Facebook has been working towards integrating its messaging apps over the past year and a half, and if WhatsApp functionality is indeed added to Business Suite, this would be the first app which enables responses across all three platforms.

So how functional and helpful is it? It depends on what you’re trying to do, but definitely, it does integrate all the key Facebook and Instagram business management tools into one app, and it largely seems to meet its remit of simplifying the various tools into one platform.

Facebook also says that it plans to make Business Suite “the main interface for businesses of all sizes who use Facebook, Messenger, Instagram and WhatsApp”. So it may well be the one to focus on, if you’re looking to establish a central platform for your Facebook/Instagram management.

After seeing success with its initial test of a new, manual reporting option, enabling users to flag tweets that contain potentially misleading claims, Twitter is now expanding the test to more regions, with users in Brazil, Spain, and the Philippines now set to get access.

Launched in August last year, Twitter’s latest effort to combat misinformation focuses on audience trends and perception of such as a means to determine common issues with the platform, and what people feel compelled to report, pointing to things that they don’t want to see.

The process adds an additional ‘It’s misleading’ option to your tweet reporting tools, providing another means to flag concerning claims.

Which is obviously not a foolproof way to detect and remove misleading content – but as noted, the idea is not so much focused on direct enforcement, as such, but more on broader trends based on how many people report certain tweets, and what people report.

As Twitter explained as part of the initial launch:

“Although we may not take action on this report or respond to you directly, we will use this report to develop new ways to reduce misleading info. This could include limiting its visibility, providing additional context, and creating new policies.”

So essentially, the concept is that if, say, 100, or 1,000 people report the same tweet for ‘political misinformation’, that’ll likely get Twitter’s attention, which may help Twitter identify what users don’t want to see, and want the platform to take action against, even if it’s not actually in violation of the current rules.

So it’s more of a research tool than an enforcement option – which is a better approach, because enabling users to dictate removals by mass-reporting in this way could definitely lead to misuse.

That, in some ways, has borne true in its initial testing – as explained by Head of Site Integrity Yoel Roth:

“On average, only about 10% of misinfo reports were actionable -compared to 20-30% for other policy areas. A key driver of this was “off-topic” reports that don’t contain misinfo at all.”

In other words, a lot of the tweets reported through this manual option were not an actual concern, which highlight the challenges in using user reports as an enforcement measure.

But Roth notes that the data they have gathered has been valuable either way:

“We’re already seeing clear benefits from reporting for the second use case (aggregate analysis) – especially when it comes to non-text-based misinfo, such as media and URLs linking to off-platform misinformation.”

So it may not be a great avenue for direct action on each reported tweet, but as a research tool, the initiative has helped Twitter determine more areas of focus, which contributes to its broader effort to eliminate misinformation within the tweet eco-system.

A big element of this is bots, with various research reports indicating that Twitter bots are key amplifiers of misinformation and politically biased information.

In early 2020, at the height of the Australian bushfire crisis, researchers from Queensland University detected a massive network of Twitter bots that had been spreading misinformation about the Australian bushfire crisis and amplifying anti-climate change conspiracy theories in opposition to established facts. Other examinations have found that bot profiles, at times, contribute up to 60% of tweet activity around some trending events.

Twitter is constantly working to better identify bot networks and eliminate any influence they may have, but this expanded reporting process may help to identify additional bot trends, as well as providing insight into the actual reach of bot pushes via expanded user reporting.

There are various ways in which such insight could be of value, even if it doesn’t result in direct action against offending tweets, as such. And it’ll be interesting to see how Twitter’s expansion of the program improves the initiative, and how it also pairs with its ongoing ‘Birdwatch’ reporting program to detect platform misuse.

Essentially, this program won’t drive a sudden influx of direct removals, eliminating offending tweets based on the variable sensibilities of each user. But it will help to identify key content trends and user concerns, which will contribute to Twitter’s broader effort to better detect these movements, and reduce their influence.

Twitter has launched a new advertising campaign which is focused on ‘manifesting’ via tweet, highlighting how a range of successful athletes and entertainers made initial commitments to their success via Twitter long before their public achievements.

Through a new set of billboard ads across the US, Twitter will showcase 12 celebrities that ‘tweeted their dreams into existence’.

“To honor these athletes and other celebrities for Tweeting their dreams into existence, Twitter turned their famous Tweets into 39+ billboards! Located across 8 cities (NYC, LA, SF, Chicago, Toronto, Houston, Tampa, Talladega), most of the billboards can be found in the hometowns or teams’ locations of the stars who manifested their dreams, such as Bubba Wallace in Talladega and Diamond DeShields in Chicago.”

Beyond the platform promotion alone, the billboards actually align with usage trends at this time of year, as people work to stick with their New Year’s resolutions, and adopt new habits that will improve their lives. Seeing big-name stars that have been able to achieve their own dreams, which they’ve publicly communicated via tweet, could be another avenue to holding firm on such commitments, while Twitter also notes that tweets about manifestation are at an all-time high, seeing 100% year-over-year growth.

Maybe that’s the key. By sharing your ambitions and goals publicly, maybe that additional accountability will better ensure that you stick to your commitments – or maybe it’s all just mental, and by adding that extra public push to yourself, you’ll feel more compelled to keep going, because it’s there for all to see.

In addition to the promotional value of the campaign, Twitter’s also donating nearly $1 million to charities as selected by each of the featured celebrities.

“Some of the charities include Boys and Girls Club, Destination Crenshaw, The 3-D Foundation, and UNICEF Canada.”

It’s an interesting push, which again comes at the right time of year. Getting into a new routine is tough, as is changing careers, publishing your first artwork, speaking in public, etc. Maybe, by seeing how these stars began as regular people, tweeting their dreams like you or I, that could act as a good motivator that you too can achieve what you set out to do, and that by posting such publicly, you’re making a commitment, not to the random public, but to yourself, that you will do it this year.

Sure, 2022 hasn’t exactly got off to a great start, with a COVID resurgence threatening to derail things once again. But maybe, this extra push could be the thing that keeps you focused, like these celebrities, even amid external distractions.

After Instagram added similar measures last year, Snapchat is now implementing new restrictions to limit adults from sending messages to users under the age of 18 in the app.

As reported by Axios, Snapchat is changing its “Quick Add” friend suggestion process so that it’s not possible for people to add users aged under 18 “unless there are a certain number of friends in common between the two users”. That won’t stop such connection completely, but it does add another barrier in the process, which could reduce harm.

The move is a logical and welcome step, which will help improve the security of youngsters in the app, but the impacts of such could be far more significant on Snap, which is predominantly used by younger people.

Indeed, Snapchat reported last year that around 20% of its total user base was aged under 18, with the majority of its audience being in the 13-24 year-old age bracket. That means that interaction between these age groups is likely a significant element of the Snap experience, and restricting such could have big impacts on overall usage, even if it does offer greater protection for minors.

Which is why this is a particularly significant commitment from Snap – though it is worth noting that Snapchat won’t necessarily stop older users from connecting with younger ones in the app, it just won’t make it as easy through initial recommendations, via the Quick Add feature.

So it’s not a huge change, as such. But again, given the interplay between these age groups in the app, it is a marker of Snap’s commitment to protection, and to finding new ways to ensure that youngsters are not exposed to potential harm within the app.

Snapchat has faced several issues on this front, with the ephemeral focus of the app providing fertile ground for predators, as it automatically erases any evidence trail in the app. With that in mind, Snap does have a way to go in providing more protection, but it is good to see the company looking at ways to limit such interactions, and combat potentially harmful misuse.

Everything You Need To Know About Performance Appraisals

Why data-driven decision-making is the foundation of successful CX