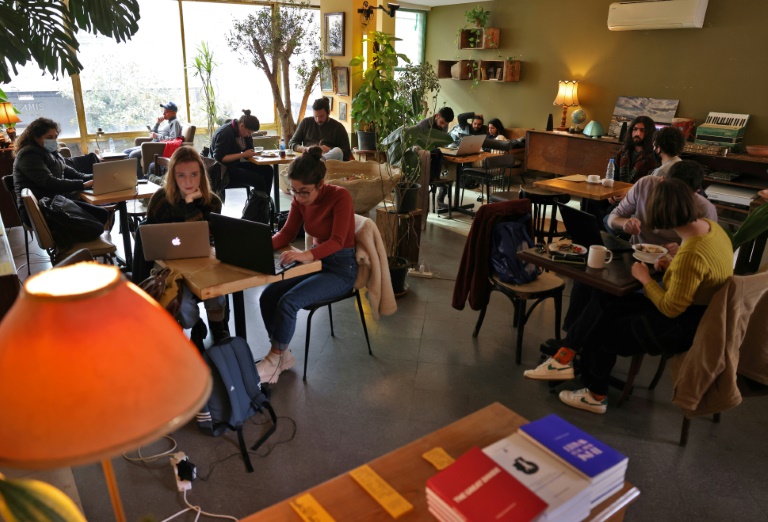 The music is often hushed and the atmosphere studious — for the patrons filling Beirut’s cafes these days, the most important things are good lighting and stable wi-fi.

Aaliya’s Books, in the heart of the capital’s once-fabled nightlife spot of Gemmayzeh, is one such sanctuary.

“Most of the time, if I come here, it’s because I don’t have electricity at home,” said Maria Bou Raphael, nestled on a sofa.

The power cuts, extending to 23 hours a day, have left many already deprived of an office by Covid restrictions with no option but to plant themselves in cafes all day, especially as the quality of many internet connections has also plummeted.

Generators — the only way to keep devices charged and connected — are too expensive for many Lebanese, as they grapple with an economic crisis that has seen the local currency lose more than 90 percent of its black market value in recent years.

Cafes are therefore among the few businesses to have largely bucked the wider meltdown driven by corruption, capital flight and would-be donors’ reluctance to throw good money after bad.

Aaliya’s Books manager Niamh Flemming Farrell said that on weekdays her establishment feels more like a co-working space, with some customers staying for a full day.

The sense of community created by the service that she provides to the neighbourhood is reviving a cafe culture that had faded in recent years.

Doubling up as a bookshop, the cafe takes its name from Aaliya Saleh, the central character in “An Unnecessary Woman”, a novel by acclaimed Lebanese-American author Rabih Alameddine.

The narrative focuses on a 72-year-old who lives secluded in her Beirut flat, in the sole company of her books while the 1975-1990 civil war rages outside.

“We noticed that… our customers started working additional hours in our branches, fancying the locations that provide a higher level of comfort,” said a spokesman for Cafe Younes, a roastery with 10 coffee shops mostly in the capital.

Cafe Younes opened a new large branch in Beirut’s central Hamra district a year ago that includes a multi-purpose study room with large desks each equipped with power sockets.

Barzakh is another multi-purpose cafe that opened recently on the first floor of a busy building on the Hamra thoroughfare.

Hamra used to epitomise a Beirut cafe culture that had its heyday in the 1960s but was gradually wiped out by bars conducive to more boisterous socialising.

“I can see people running and yelling (outside) but I’m sitting here quietly in a relaxed spot,” said fashion design student Mustafa al-Sous said, sitting beside a large window.

The young man sees Barzakh as a haven from the doom and gloom that has been so pervasive across Lebanon in recent years, but also as a place where he can work.

Notebooks and laptops clogged the tables in this cafe, while tangled charger cables strewn across the floor threatened to trip waiters.

“Originally we wanted to ban laptops,” Mansour Aziz, the founder of the cafe-cum-library, which also hosts live shows in the evenings, recalls with a disbelieving smile.

Many here, dragged out of their homes by the electricity crisis, now rely on the cafes for their social life, especially those who can no longer afford to party in the evenings.

At Barzakh, patrons will often greet each other with a nod from across the room and come to know each other gradually.

“I’m a very sociable person,” Mustafa said. “I like it when people walk over to ask me what I’m working on.”

Inspired by Navalny, Russian bloggers stand up to corruption 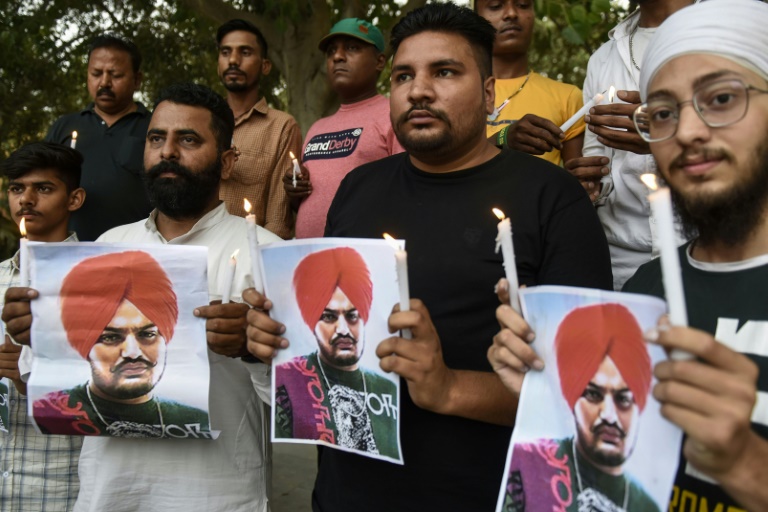 The song “SYL” talks about the Sutlej-Yamuna Link (SYL) canal which has been at the centre of a long-running water dispute between the late Sikh rapper’s home state of Punjab and neighbouring Haryana.

The track, released posthumously on Thursday, also touches on other sensitive topics such as deadly riots targeting the Sikh community that broke out in India in 1984 and the storming of an important Sikh temple in Amritsar by the army the same year.

It had garnered nearly 30 million views and 3.3 million likes on the singer’s YouTube page before it was pulled down over the weekend.

“This content is not available on this country domain due to a legal complaint from the government,” said a message posted on the song link.

The song is still available in other countries.

In an email to AFP, a YouTube spokesperson said it had only removed the song in “keeping with local laws and our Terms of Service after a thorough review”.

The government did not immediately respond to enquiries.

Moose Wala’s family termed the removal of the song “unjust” and appealed to the government to take back the complaint, local media reports said.

“They can ban the song but they cannot take Sidhu out of the hearts of the people. We will discuss legal options with lawyers,” uncle Chamkaur Singh was quoted as saying by the Hindustan Times daily.

Moose Wala — also known by his birth name Shubhdeep Singh Sidhu — was shot dead in his car in the northern state of Punjab last month.

The 28-year-old was a popular musician both in India and among Punjabi communities abroad, especially in Canada and Britain.

His death sparked anger and outrage from fans from across the world.

The men had allegedly acted at the behest of Canada-based gangster Goldy Brar and his accomplice Lawrence Bishnoi who is currently in jail in India.

Moose Wala rose to fame with catchy songs that attacked rival rappers and politicians, portraying himself as a man who fought for his community’s pride, delivered justice and gunned down enemies.

He was criticised for promoting gun culture through his music videos, in which he regularly posed with firearms.

His murder also put the spotlight on organised crime in Punjab, a major transit route for drugs entering India from Afghanistan and Pakistan.

Many observers link the narcotics trade — mostly heroin and opium — to an uptick in gang-related violence and the use of illegal arms in the state.