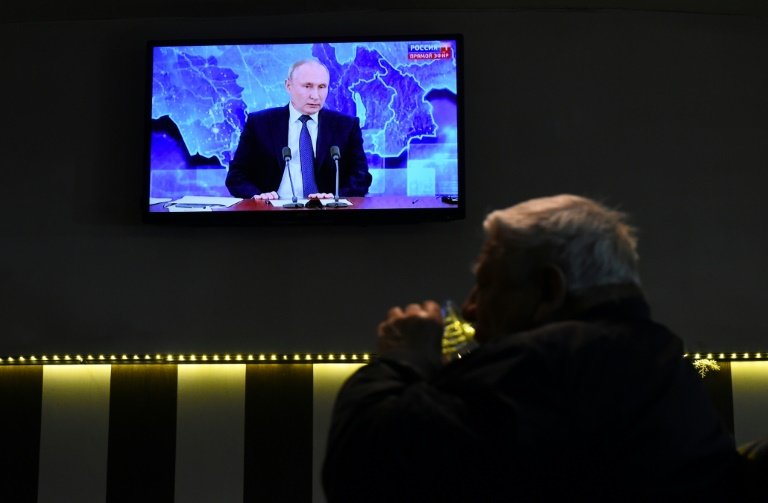 Russia has moved to throttle independent media after its invasion of Ukraine, allowing state television to dominate the airwaves with broadcasting that relentlessly promotes Russian successes and carefully toes the Kremlin line.

Even in the restrictive climate under President Vladimir Putin, Russia before the invasion still had a relatively diverse landscape in television, newspapers and online.

But draconian new rules ordered after the operation was launched — which have made it illegal to call the military action an “invasion” or disseminate “fake” news about it — have transformed the scene.

The two pillars of Russian independent media over the last years — the radio Echo of Moscow (Ekho Moskvy) and TV channel Rain (Dozhd) — have halted broadcasts, while access has been blocked to pro-opposition online news sites and major social networks.

The changes leave “no space for free speech and opinion on the war”, said the Council of Europe’s Commissioner for Human Rights, Dunja Mijatovic.

Jeanne Cavelier, the head of Eastern Europe for press freedom group Reporters Without Borders (RSF), said an information war was in “full swing” in Russia.

“President Vladimir Putin needs to put all the media on a battle footing in order to justify the invasion of Ukraine to Russian citizens by concealing the war’s victims,” she added.

This has left Russian state television’s slick but aggressive news broadcasts dominating the airwaves and given every chance to shape public opinion.

Channel One’s main news show Vremya (Time), an evening fixture since the Soviet era, opens each night by hailing the exploits of individual Russian soldiers who have shown “heroism and courage” in battle.

There is no mention of the death toll — Moscow has said 498 soldiers have died but Ukraine and Western sources claim it is much higher.

Western anger is denounced as “hysteria” and Ukrainian “aggression” carried out by “neo-Nazis” is condemned.

With the word “invasion” banned, the term “special military operation in Ukraine” is used by presenters and reporters.

Ukrainian President Volodymyr Zelensky is the target of mockery and questions about his mental health, with a media conference edited in a bid to show he is in what the reporter describes as an “inadequate condition”.

Frequent reports are broadcast by Russian state TV’s chief war correspondent Yevgeny Poddubny, who won national fame during the conflict in Syria, and is embedded with Russian troops outside Kyiv.

The actions of Ukraine are “slowing down the advance of Russian troops but won’t stop it”, he declared emphatically in a report.

While drawing conclusions about public opinion in Russia is currently hazardous, a poll last week by Russian pollster VTsIOM — seen as sympathetic to the government — said that 71 percent of Russians support the invasion and the number was rising.

“Not everyone in Russia understands what is going on,” said Kadri Liik, a senior policy fellow at the European Council on Foreign Relations.

“Russia’s information space was very tightly controlled already and now it has become even more so,” she added.

Other shows echo the message of the news programmes, notably the programmes hosted by notorious presenters Vladimir Solovyov and Dmitry Kiselyov, both on the EU sanctions list.

Kiselyov, who even in 2014 famously warned that Russia could turn the US to “radioactive ash”, presents the weekly Sunday show Vesti Nedeli (News of the Week) but is also the deputy head of Russian state TV VGTRK and one of the most powerful figures in Russian media.

“Our submarines are capable of firing 500 nuclear warheads to guarantee the destruction of the USA and all NATO countries,” he declared after Putin ordered nuclear forces to move to combat readiness.

One of Solovyov’s guests on a recent edition of his debate show was the editor-in-chief of state-run international channel RT Margarita Simonyan, who argued that Russia should adopt an approach similar to China in banning access to foreign social media.

“We allowed into our country — years ago — an alien army — we allowed army bases to be set up in the name of this Facebook and things like that. And now we are surprised that this foreign army is shooting at us,” she said.

In this climate, Russia’s best known independent newspaper Novaya Gazeta — whose editor-in-chief was awarded the Nobel Peace Prize last year — has now said it would be removing archive content on Ukraine from its website so as not to fall foul of the new law.

“Soon you (Russians) will have the same access to information as I do in prison. In other words — nothing.”

Okay, let’s just check in on the latest with the Twitter/Elon Musk takeover saga, and where things are placed to close out the week.

According to the latest reports, Musk’s team recently asked Twitter for more tweet info, in order to help it make an accurate assessment of bot activity in the app. This comes after Musk questioned Twitter’s claim that bots and fake accounts make up only 5% of its active user base, and said that his Twitter takeover deal could not go ahead unless Twitter could produce more evidence to support this figure.

Which Twitter did, by providing Musk with access to its ‘full firehose’ of tweets over a given period, which it shared with Musk’s team back on June 8th. Musk’s group has now had that data for a couple of weeks, but this week, it said that this info is not enough to go on, and that it needs even more insight from Twitter to make its judgment.

Which may or may not be a concern, depending on how you see it.

As noted, Musk’s team says that this has not provided it with the insight that it needs to conduct an accurate analysis of potential bot activity, so Twitter has now provided Musk with more ‘real-time API data’.

It’s not clear whether that means that Twitter has provided everything that its API systems can provide, but that could mean that Musk’s team can now access:

That should satisfy any analytical needs to uncover potential bot trends, and get a better handle on Twitter’s bot problem, though it also means that Musk has all your tweet info – which, again, it’s worth noting, Twitter up till now had been hesitant to provide.

I’m sure it’s fine. Musk’s team is beholden to disclosure laws around such, so it’s not like they can do anything much with that info anyway, in a legal sense. But the idea that the sometimes erratic Elon Musk now has all the tweets could be a little concerning for some.

But Twitter likely had to provide what it can, and if Musk is going to become CEO of the app soon anyway, he’s going to have access to all of that data either way.

But still, given Musk and Co’s past history of undermining and attacking critics, sacking trouble maker employees and digging up potential dirt on rivals, it sits a little uneasy.

Should be fine. No problems – no need to go deleting all your DMs (which are likely not included in the data that Twitter has provided at this stage).

According to reports, Musk’s team says that it now has the info it needs to make its assessment of bot activity, which should see the deal move forward (or not) sometime soon.

Of course, no one knows what exactly is going to happen next, and whether Musk’s team will look to renegotiate, or even back out of the deal entirely as a result of its bot analysis. But it does seem like, one way or another, Musk will be forced to go ahead with the $44 billion transaction, with Twitter’s past bot reporting methodology already accepted by the SEC, giving it legal grounding to argue that it’s acted in good faith, regardless of what Musk’s team finds.

The next steps then, according to Musk, would be securing debt financing and gaining Twitter shareholder approval, clearing the last hurdles for Musk to change the app’s name to ‘Telsla Social’, and add a million references to ‘420’ into the platforms various terms and conditions.

Because of the memes, because weed jokes are still funny to the richest man in the world – because he vacillates between inspired genius and a massive nerd who now gets to play out some fantasy of being cool.

Or something. Who knows what goes on in Elon Musk’s head – which is also why most are hesitant to bet against him, as nobody knows if and how he might be able to fix Twitter, and whether this is a great investment or a massive disaster.

It seems like we may soon find out. Maybe. Who knows. Either way, the memes should be great.