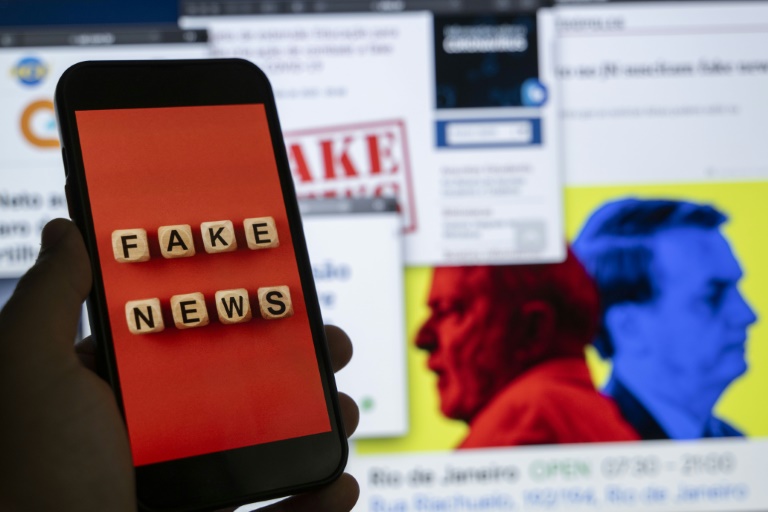 Fake news is a major concern in the run-up to presidential elections in Brazil in October 2022 – Copyright AFP Frederic J. BROWN

In a divisive election campaign blighted by fears of unrest if far-right President Jair Bolsonaro refuses to accept defeat, Brazil is waging an uphill battle against disinformation wielded as a political weapon.

Analysts say Bolsonaro’s 2018 electoral victory was in no small part due to an effective fake news smear campaign against his opponents.

“Disinformation has run wild” on newer platforms such as Telegram and TikTok, which allow for the rapid dissemination of easily manipulated video content, says Ana Regina Rego, coordinator of the National Network to Combat Disinformation.

Social media videos and other posts have sought to portray Lula, among other things, as an alcoholic who will shut down churches if elected in October.

Bolsonaro also has been targeted by fake news posts that have questioned, for example, whether he was really stabbed on the campaign trail in 2018.

And despite nonstop work to debunk these and other false claims, such posts find fertile ground in a country where a 2018 study found that almost half of Brazilian voters relied on WhatsApp to read news about politics and elections.

The figure was even higher among Bolsonaro voters.

In 2022, spreaders of disinformation have even more avenues including Telegram, the fast-growing messaging system that Bolsonaro has publicly embraced after having posts blocked on Facebook, Twitter and YouTube.

The reach of fake news is impressive.

Three TikTok videos alleging to show Lula getting drunk on a transparent liquid — which is actually water — were seen 6.6 million times, while another five on the same platform that try to cast doubt on Bolsonaro’s stabbing had 3.3 million views.

Content that combines “facts, lies and decontextualizations with sensationalism has a 70 percent greater chance to go viral than something informative,” Rego noted.

TikTok told AFP its policy is to withdraw content that violates its “community norms” and may affect the electoral process, and to avoid highlighting “potentially misleading information that cannot be verified.”

At the outset of the 2022 presidential campaign, Supreme Electoral Court president Alexandre de Moraes vowed the justice system would be “resolute” in the fight against fake news.

And there have been some successes.

Moraes has since ordered social networks to remove several Bolsonaro posts on grounds of disinformation, along with many others from his supporters.

The court oversaw the creation of a group with companies such as Facebook, Instagram, WhatsApp, Google and TikTok to screen out fake news and report offenders.

Campaigns have been rolled out to boost digital literacy among social media users.

WhatsApp agreed to delay until after the election the launch in Brazil of a new “Communities” feature that would allow the creation of groups of groups, with administrators able to send messages to all — thus vastly increasing the potential for viral information spread.

Telegram bowed to pressure to take down disinformation content under threat of being blocked for not collaborating with the authorities.

“Without the collaboration of the platforms, it is very difficult” to pursue the spreaders of disinformation, said sociologist Marco Aurelio Ruediger of the Getulio Vargas Foundation, a Rio think tank.

“It takes a long time to adopt punitive measures, and by then the damage is already done, because the information has already circulated,” he said.

It is not only on social media, however, where lies are spread.

Bolsonaro himself has repeatedly criticized Brazil’s electronic voting system, which he alleges — without evidence — is riddled with fraud.

The president is under investigation for the claims.

Bolsonaro, who is fond of saying “only God” can remove him from office, has warned Brazil faces “an even worse problem than the United States.”

This has led to fears that his supporters might not accept the results, and that Brazil could see a burst of violence akin to the attack on the US Capitol in January 2021 in the wake of Donald Trump’s loss to Joe Biden.

Trump’s backers were riled up in part on social media, where Bolsonaro has tens of millions of followers.

“I fear that the results will not be accepted and that violence will be encouraged; we could experience a situation similar to that of the United States,” said Ruediger.