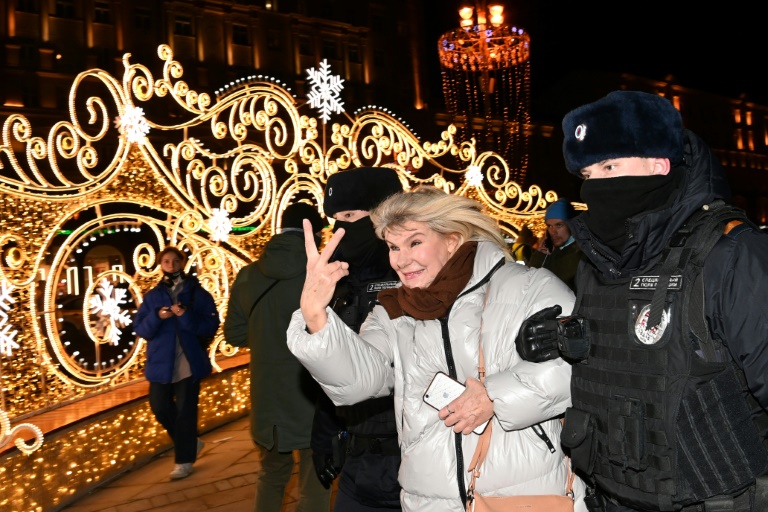 After hundreds of arrests at the first anti-war demos in Russia, the movement has gone online – Copyright AFP Hoang Sa

The head of Russia’s state-run RT television is in no doubt. If fellow citizens oppose President Vladimir Putin’s action in Ukraine then they are no longer Russians.

Margarita Simonyan, editor-in-chief of the English language international news network, is never one to mince her words and is used to making cutting remarks on Twitter in defence of Putin who she refers to simply as “leader”.

“If you are ashamed of being Russian now, don’t worry, you are not Russian,” was her summation of the anti-war movement at home.

Several thousand Russians demonstrated against the Russian invasion of Ukraine, but the police reaction was the usual one when it comes to Kremlin critics: hundreds of arrests.

So the anti-war movement has moved online, where it is beginning to make itself heard and to garner support, some of it high-profile.

Ukrainian flags adorn profile pictures and teary-eyed emojis are scattered liberally among the online statements. The hashtag #NoToTheWar was trending on Twitter on Saturday.

Since early Thursday, when the invasion of Ukraine began, various Russian celebrities, journalists and bloggers have expressed their horror and helplessness, pleading for an immediate end to the war.

The popular video blogger and documentary filmmaker Yuri Dud saw one of his online posts get a million “likes”.

“I write these words for a reason. When my children grow up and discover this moment in history… and ask me ‘Dad, what did you do?’, I want to have written proof that I did not choose this regime and did not support its imperialist rage,” he wrote.

Elena Chernenko, a journalist with the Kommersant daily, said she was excluded from the pool of journalists covering Foreign Minister Sergei Lavrov because she started an anti-war petition among her colleagues.

An open letter from the arts and cultural fields on Saturday had the support of more than 2,000 actors, directors and other creative figures.

They dismissed Putin’s argument that the invasion is a “peacekeeping” operation to save Russian speakers in eastern Ukraine.

“Forcing peace through the use of force is absurd,” the letter said.

Just as many doctors, nurses and paramedics have signed their own online missive.

“No matter how you seek to justify the use of lethal weapons, they are still lethal,” they wrote.

And an anti-war petition on the change.org website has gathered more than 750,000 signatures in two days.

Among the celebrities making their voices heard, including regulars on loyal public television, is popular singer Valery Meladze.

“This must be stopped!” was her message on Instagram on the first day of the invasion.

Dmitry Muratov, the 2021 Nobel Peace Prize laureate and editor-in-chief of the opposition newspaper Novaya Gazeta, expressed his shame in an online video.

“We are suffering,” said Muratov. “Our country, on the orders of President Putin, has started a war against Ukraine. And nobody can stop it. Therefore, to our suffering is added shame.”

In a highly symbolic move, the founders of the “Immortal Regiment”, an organisation dear to the Kremlin because it is responsible for preserving the memory of the dead of the Second World War, called on the Putin “to cease fire”, describing the use of force as “inhuman”.

Moscow’s Garage museum of contemporary art, founded by Kremlin-linked oligarch and Chelsea FC owner Roman Abramovich, announced it would close on Saturday, refusing to “maintain the illusion of normality”.

Also two communist MPs who voted for the recognition of the independence of pro-Russian separatists in eastern Ukraine, have denounced the invasion of Russia’s neighbour.

“I voted for peace, not for war. I voted for Russia to be a shield (for the separatists… not for Kiev to be bombed,” wrote MP Mikhail Matveyev.

Addressing the celebrities and “thousands and thousands” of anonymous Russians denouncing the invasion,  Ukrainian President Volodymyr Zelensky thanked them and asked them to stop those who “lie to the whole world”.

Putin has described Zelensky and his government as “terrorists” and “a gang of drug addicts and neo-Nazis”, urging the country’s military to topple him.

How Social Platforms are Responding to the Crisis in Ukraine

LinkedIn Data Reveals What Type of InMail Gets Best Results