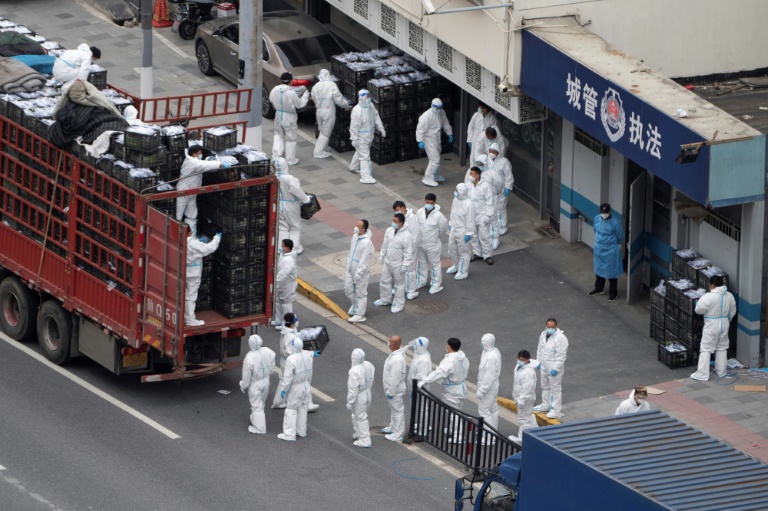 The world’s most populous country is glued to an aggressive “zero-Covid” strategy, with Beijing extracting political value from China’s relatively low death rates since the pandemic began and gloating over its handling of the virus compared to Western rivals.

But well over two years since the virus first emerged, Shanghai now simmers under an Omicron-fulled outbreak that has 25 million city residents locked down.

Record caseloads have topped 20,000 a day and the lockdown — initially billed as a phased, localised measure — appears set to drag on, even as much of the world learns to live with Covid.

Many residents have tired of the government’s grandstanding and social media has opened a window into their fury at food shortages, strict quarantines and overzealous officialdom.

In one particularly egregious video clip verified by AFP, a person in a hazmat suit is seen bludgeoning a corgi dog to death in the street.

A state-run Shanghai media outlet said Thursday the local neighbourhood committee had admitted culling the creature because they were “afraid of being infected”, but conceded the act was “thoughtless”.

The video has zipped across social media despite China’s strict internet censorship.

“That post about the corgi just keeps getting reshared on my WeChat moments,” a Shanghai resident told AFP, requesting anonymity.

“I think a lot of people are going to be trying to be taking action through petitions and talking to their community… so hopefully the anger and fear turns into something more positive.”

In another dystopia-tinged viral video, a drone whirrs through a housing compound at night broadcasting a message urging residents to “control your soul’s desire for freedom”.

The video is unverified, but was billed as a local government reaction to a Shanghai neighbourhood, which serenaded officials with swear-word laden chants in a widely-shared clip.

Other viral videos — whose locations have been verified by AFP — appear to show residents scuffling with hazmat-clad officials and bursting through a barricade onto a street, yelling “we want to eat cheap vegetables!”

Sudden stay-at-home orders have left residents short of fresh food, while delivery apps are overwhelmed each morning as demand surges and many drivers are reportedly off work fearing a positive Covid test could send them into state quarantine.

Taken together, the videos form a rare montage of public anger and a riposte to the government’s narrative that it is in complete control of the pandemic.

China has refused to abandon its “dynamic zero” Covid strategy of border restrictions, lengthy quarantines and targeted lockdowns, even as new variants test the limits of the policy.

Any shift is unlikely while Beijing touts its pandemic controls as vindication of its right to rule, said Steve Tsang, director of the SOAS China Institute in London.

“Zero-Covid is not just a Party policy, but … a Xi policy”, he said, referring to China’s President Xi Jinping.

“As such it cannot be wrong and cannot be abandoned — at least not until Xi sees its continuation will harm himself or his hold on power.”

Official figures show the vast majority of the more than 100,000 cases in Shanghai in the past month show no symptoms of Covid-19.

Yet tens of thousands of beds have been set up in centres to quarantine the infected.

Officials only softened a policy of splitting Covid-positive children and babies from their virus-free parents after videos of wards full of young kids stoked public outrage.

For experts, what is happening in Shanghai — and the social media backlash — is exposing the conundrum at the heart of the central policy.