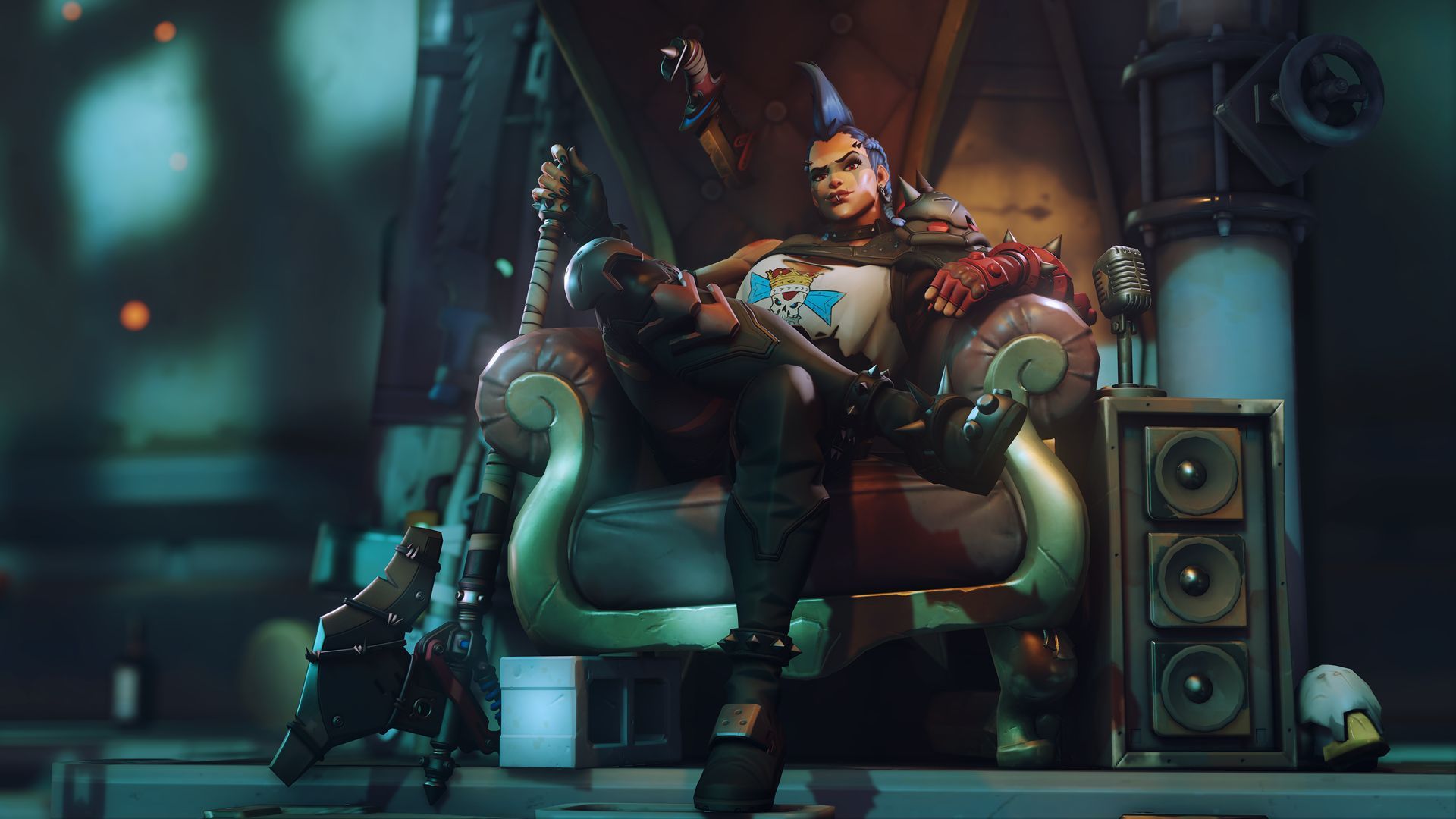 It’s our pleasure to welcome players to the Overwatch 2 beta!

Starting today, June 28, until July 18, players on Xbox One and Xbox Series X|S will have the opportunity to join our beta test for the first time before Overwatch 2 officially launches on October 4. This beta features new tank hero Junker Queen, new map Rio, and a new Push game mode. Additionally, players will finally get to experience the new and reimagined 5v5 gameplay and redesigned heroes.

We’ve shared a lot of information over the past few weeks – like how Overwatch 2 will be free for all players starting October 4. Here’s what you’ll get to experience within this beta and game launch later this year:

Junker Queen joins the Overwatch 2 roster as the newest tank hero with a big axe and even bigger ideas. As we saw in The Wastelander cinematic, the Scrapyard’s sovereign is fierce, resourceful, and no stranger to survival. And now, she’s come to claim her rightful throne.

Bring the fight to new destinations as the scope of PvP expands. Travel the world, savor breathtaking sights, and clash on the streets of iconic locations like Monte Carlo, Rome, Toronto, and New York City. Rio is an especially fun map, with a carnival float payload moving through a club where Lucio DJs.

Introducing the new Push game mode. In this new, symmetrical map type, teams will battle to take control of a robot that begins in a central location, then push it toward the enemy base. This new mode will join the existing lineup of modes, bringing more objectives to capture, strategies to explore, and secrets to unearth.

For beta, we will begin granting access to players who opted-in through July 14. Players who buy the Overwatch 2: Watchpoint Pack on the Xbox Store will be granted immediate beta access today.

Our team has both technical and gameplay-related goals for this beta, so please share your thoughts, feedback, and experiences with us on Overwatch 2 beta forums! We are enthusiastic about including players in this vital testing phase, and we hope everyone has a great time in-game!

Get equipped for Overwatch® 2!

Get ready for a new and reimagined Overwatch® 2 PvP experience:
– New heroes and an all new 5v5 structure will shake up competitive play and create opportunities for bold new strategies.
– New Push game mode features new symmetrical maps where teams engage in a tug-of-war battle and push TS-1, a centrally-located robot, deeper into enemy territory.
– With an always-on live service, Overwatch® 2 will introduce new heroes, maps, modes and cosmetic content with each season – Season 1 starts with launch in October!

A mobile phone number must be linked to your Battle.net Account to play Overwatch.
*Actual platform availability and launch date(s) of Overwatch 2 PvP Crossplay Beta subject to change. See playoverwatch.com/beta for more details. Minimum Beta duration is 18 days. Limited time only. Internet Connection and Xbox Live Gold subscription required.
**Items will be awarded to players that have purchased Overwatch® 2 Watchpoint Pack when Overwatch® 2 launches, actual date subject to change.
***Season 1 Battle Pass applies to Season 1 only and will not award access to any future Battle Pass or seasonal/live content. Season 1 will launch alongside Overwatch® 2 in October 2022.
For more information, please visit https://playoverwatch.com.

“If You Wanna Party,” put on your dancing shoes and call your friends because Just Dance 2023 Edition is now available for Xbox Series X|S. The all-new dance-on-demand platform comes with 40 new songs from popular artists including BTS, Harry Styles, and Dua Lipa, plus artist collaborations with Ava Max and Billie Eilish.

Just Dance 2023 Edition introduces many new features to the franchise. It has a fresh art direction and redesigned UI, crafted to provide more intuitive navigation menus, increased immersion in the 3D worlds, and more detailed coaches and camera movements. The game also has an improved recommendation system, offering players a personalized experience for maximum dancing fun.

All your dancing will eventually pay off with the new progression system, earning points for each completed dance. By earning points, players can unlock rewards like customizable dancer cards and emote stickers. Additionally, Online Multiplayer will be available at a later date for the first time, allowing up to six players to dance together around the world. Couch co-op is available at launch for local friends. Free content updates will be added throughout the year, so stay tuned for more game modes, songs, and seasons.

Just Dance 2023 Edition features two new artist collaborations: Billie Eilish is partnering with the game with her song “Therefore I Am,” and Ava Max created original choreography for Just Dance with her chart-topping hit “Million Dollar Baby.” K-Pop has returned in Just Dance franchise with songs like “Boy With Luv” by BTS Ft. Halsey, “Dynamite” by BTS, and “More” by K/DA Ft. Madison Beer, (G)I-DLE, Lexie, Jaira Burns and Seraphine. And no Just Dance library would be complete without bops like “Can’t Stop The Feeling!” by Justin Timberlake, “Physical” by Dua Lipa, “Toxic” by Britney Spears, “Telephone” by Lady Gaga Ft. Beyonce, and many more.

Gather your friends and family, do some light stretching, and get ready to “Sissy That Walk” and master some new choreography. Jump into the next era of Just Dance today!

Welcome to a new era of dance with Just Dance® 2023 Edition! For the first time ever, dance to BTS with “Dynamite” and other top chart hits! Now with personalization, 3D immersive worlds, and new songs and modes year-round,* you can experience a never-ending dance party all year long!

• New user interface: Thanks to a new, more modern, and intuitive user interface, everything is one click away: playlists, game modes, and songs! More time dancing, less time searching!


*Additional content made available on a rolling basis for a limited time during the 12 months following launch of the game; download required.

**Just Dance+is a streaming service, playable via Just Dance® 2023 Edition, that grants access to additional songs. Terms and conditions apply. Requires the connection to a Ubisoft Account (13[PLUS]), permanent internet access and the payment of a fee. Auto-renewal may be activated during the purchase. Age and territorial restrictions may apply. Applicable platform account and platform subscription (sold separately) required. Persistent internet connection and Ubisoft account required.