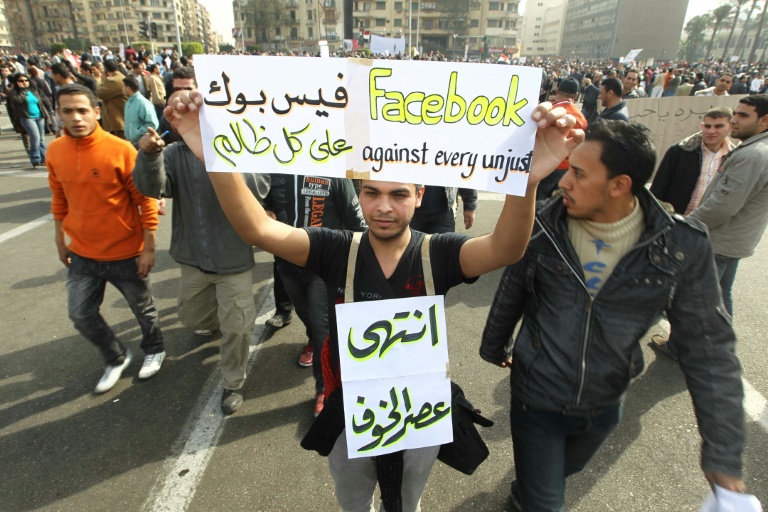 Facebook was hailed during the Arab Spring revolts, but its reputation was later tarnished – Copyright AFP/File KHALED DESOUKI

When Yarema Dukh set up Ukraine’s official Twitter account in 2016, he knew that social media was the best way for his country to get its message out.

“We never had the means like the Russians to found multinational media like RT or Sputnik,” the former government communications adviser told AFP over the phone from Kyiv.

Since Russia’s full invasion last month, the Kyiv government has used social media to highlight atrocities, issue messages of defiance and even share a joke or two.

Young Ukrainians have used TikTok to chronicle life under Russian siege and tech enthusiasts have commandeered Telegram channels to organise donations of cryptocurrency.

On the other hand, Russia has launched an onslaught against Western tech firms and all but ended free speech online.

The Ukraine war marks the expansion of social media in conflicts from a tool of the outsider to a genuinely ubiquitous presence.

But the tortuous history of its relations with protest movements and governments — from 2011’s Arab Spring to Myanmar today — suggests Ukraine will have to fight to hold on to its gains.

Back in 2011, Facebook was far from the behemoth it is today and Twitter barely registered in many countries.

“We were fighting to carve out a space in the margins,” said Hossam El-Hamalawy, an Egyptian activist who became a prominent voice during the Arab Spring protests.

The revolts across the Middle East and North Africa became known as the “Facebook revolution” but the jury is still out on its overall role.

Hamalawy said social media’s real power was not as an organising tool but as a way of amplifying the message.

“I knew that anything I wrote on Twitter would get picked up (by mainstream media),” he told AFP from his home in Berlin.

In the early 2010s in Ukraine, Dukh says the most popular social media was a blogging platform called LiveJournal.

But then a journalist posted a message on his Facebook in 2014 promising to launch an anti-government rally if he received 1,000 replies.

When he got enough replies, he went to Maidan square in the heart of Kyiv and launched a protest that brought down the pro-Russian government.

The exposure also helped Facebook become the number one social network by far in Ukraine.

During this period, the US tech giant was happy to embrace its association with outsiders and protesters.

Company boss Mark Zuckerberg wrote in 2012 that the firm was not interested in profits but rather in empowering people to carry out social change.

However, social media companies were already in a much more complex position.

Burmese journalist Thin Lei Win said 2012 was the moment when Facebook “became the internet” in Myanmar.

“Everything was on Facebook and everybody was sharing everything,” she told AFP.

But some of the messages being shared were incendiary, spreading false information that stoked violence between Buddhist nationalists and the Muslim Rohingya minority.

By 2018, a UN rapporteur called the platform a “beast” and accused it of inciting racial hatred.

The wheels came off in Egypt too, where faction fighting among protesters on the street was mirrored by bitter feuds online.

Protest leader Wael Ghonim, whose Facebook messages had helped to galvanise the movement, told US broadcaster PBS in 2018 that he soon became a target of online disinformation.

“I was extremely naive,” he said, “thinking that these are liberating tools.”

Meanwhile in Ukraine, the Maidan revolution was also turning sour.

Moscow had used it as a pretext for annexing Crimea and sowing unrest in Ukraine’s east.

Dukh, as a new recruit in the government’s communications team, found himself battling Russian troll farms.

Activists in Arab Spring countries now lament how the platforms they once lauded have been retooled to serve the powerful.

A group of NGOs wrote an open letter to Facebook, Twitter and YouTube last year accusing them of supporting repression by systematically shutting accounts of dissidents across the region.

But Thin Lei Win said the authorities were aware that Burmese people were enthusiastic sharers and began stopping people in the streets and demanding to see their phones.

“If you had posted anything on your social media critical of the junta or supportive of the NUG (National Unity Government) you could be arrested,” she said.

Facebook and other platforms closed accounts of the Burmese generals shortly after the coup and, according to Thin Lei Win, established platforms have hugely improved their record with disinformation.

Thin Lei Win and activist groups point out that the generals have since hopped on to other networks and their messages still get through.

“It’s like whack-a-mole, you close something, something else pops up,” said Thin Lei Win.

Younger companies like TikTok and Telegram have been criticised for continuing to host Burmese military propaganda.

In Ukraine too, TikTok and Telegram have both been accused of failing to tackle Russian disinformation.

But Dukh, who left the Ukrainian government in 2019, continues to see the positive side of social media.

He said Ukraine had learnt lessons from its years of dealing with Russian disinformation and could share them with the world.

“We are good learners and I hope after the victory we’ll be good teachers as well,” he said.

Okay, let’s just check in on the latest with the Twitter/Elon Musk takeover saga, and where things are placed to close out the week.

According to the latest reports, Musk’s team recently asked Twitter for more tweet info, in order to help it make an accurate assessment of bot activity in the app. This comes after Musk questioned Twitter’s claim that bots and fake accounts make up only 5% of its active user base, and said that his Twitter takeover deal could not go ahead unless Twitter could produce more evidence to support this figure.

Which Twitter did, by providing Musk with access to its ‘full firehose’ of tweets over a given period, which it shared with Musk’s team back on June 8th. Musk’s group has now had that data for a couple of weeks, but this week, it said that this info is not enough to go on, and that it needs even more insight from Twitter to make its judgment.

Which may or may not be a concern, depending on how you see it.

As noted, Musk’s team says that this has not provided it with the insight that it needs to conduct an accurate analysis of potential bot activity, so Twitter has now provided Musk with more ‘real-time API data’.

It’s not clear whether that means that Twitter has provided everything that its API systems can provide, but that could mean that Musk’s team can now access:

That should satisfy any analytical needs to uncover potential bot trends, and get a better handle on Twitter’s bot problem, though it also means that Musk has all your tweet info – which, again, it’s worth noting, Twitter up till now had been hesitant to provide.

I’m sure it’s fine. Musk’s team is beholden to disclosure laws around such, so it’s not like they can do anything much with that info anyway, in a legal sense. But the idea that the sometimes erratic Elon Musk now has all the tweets could be a little concerning for some.

But Twitter likely had to provide what it can, and if Musk is going to become CEO of the app soon anyway, he’s going to have access to all of that data either way.

But still, given Musk and Co’s past history of undermining and attacking critics, sacking trouble maker employees and digging up potential dirt on rivals, it sits a little uneasy.

Should be fine. No problems – no need to go deleting all your DMs (which are likely not included in the data that Twitter has provided at this stage).

According to reports, Musk’s team says that it now has the info it needs to make its assessment of bot activity, which should see the deal move forward (or not) sometime soon.

Of course, no one knows what exactly is going to happen next, and whether Musk’s team will look to renegotiate, or even back out of the deal entirely as a result of its bot analysis. But it does seem like, one way or another, Musk will be forced to go ahead with the $44 billion transaction, with Twitter’s past bot reporting methodology already accepted by the SEC, giving it legal grounding to argue that it’s acted in good faith, regardless of what Musk’s team finds.

The next steps then, according to Musk, would be securing debt financing and gaining Twitter shareholder approval, clearing the last hurdles for Musk to change the app’s name to ‘Telsla Social’, and add a million references to ‘420’ into the platforms various terms and conditions.

Because of the memes, because weed jokes are still funny to the richest man in the world – because he vacillates between inspired genius and a massive nerd who now gets to play out some fantasy of being cool.

Or something. Who knows what goes on in Elon Musk’s head – which is also why most are hesitant to bet against him, as nobody knows if and how he might be able to fix Twitter, and whether this is a great investment or a massive disaster.

It seems like we may soon find out. Maybe. Who knows. Either way, the memes should be great.