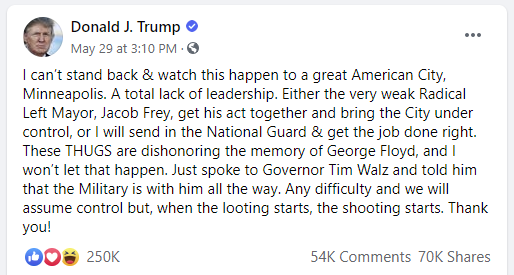 Despite ongoing criticism of its policies, and its approach to divisive comments and content, Facebook has thus far stood firm on its stance that it should intervene as little as possible, and leave such commentary active, in many cases, in order to let users see what other people have to say.

Will this make Zuck and Co. re-think that stance?

This week, a collection of civil rights groups, including the Anti-Defamation League, the NAACP, Sleeping Giants and Common Sense Media, have teamed up to launch a new campaign calling on major advertisers to pause their Facebook ad spend in July, in order to send a message to the company that its lack of action is not good enough.

“We are asking all businesses to stand in solidarity with our most deeply held American values of freedom, equality and justice and not advertise on Facebook’s services in July.”

Concerns around Facebook’s policies on such have always lingered, but the issue has been amplified by the #BlackLivesMatter movement, and in particular, Facebook’s refusal to take any action on this post from US President Donald Trump.

Trump also posted the same comment on Twitter, and Twitter chose to put a warning on the tweet, as it violated platform policies regarding “the glorification of violence based on the historical context of the last line”.

Facebook refused to take any action on the comment, as per its normal approach to Trump’s posts, which has prompted the civil rights organizations to launch their campaign, and seek to mobilize advertisers to hit Facebook’s earnings, in the hopes of prompting further action,

In order for the campaign to cause Facebook any real issues, a lot of businesses would need to take part, which is a big ask, but thus far The North Face has joined the cause, while digital-advertising firm 360i, which represents McCormick & Co., Discover Financial Services and Unilever, among others, has also urged its clients to join the boycott.

Again, that won’t be enough to cause a serious dent in Facebook’s finances, but simply by taking part, and promoting the campaign, it hurts Facebook’s reputation. More brands sharing the message means more awareness of the concerns around Facebook’s ad policies – so while it may not deal a crippling blow to Facebook’s business, it will help to boost concerns, which could also prompt Facebook to take more action.

And really, it’ll only take a few major brands joining the cause to cause a serious PR issue for The Social Network. Right now, Facebook might not be any more concerned than it had already been, in regards to the campaign launch, but if a few more big names announce their support, that could be a big issue, perceptually, if not financially.

But Facebook has remained firm on its stance thus far, with CEO Mark Zuckerberg repeatedly stating that the voters should be able to see what elected officials, in particular, have to say, whether they like such comments or not. People can respond to such by voting, and in this sense, Facebook sees itself as playing an important part in civic discourse, by providing a platform for people to see what their leaders have to say, on everything.

That level of interaction wouldn’t be possible without social media, so it’s a good thing, in Facebook’s estimation, that people have that connection with their leaders.

The problem is that this takes an idealistic view, and doesn’t account for the fact that many people will take comments from the President at their word – no matter how truthful, or not, or accurate, or not, they may be.

Maybe, this latest protest action will prompt more internal discussion around such, and send a stronger message to Facebook about the related impacts.

How Social Media Platforms are Marking Juneteenth, Which Commemorates the End of Slavery in the US

See also  The Ultimate Guide to Social Media for E-Commerce

See also  A Checklist of Great SEO Tools for 2020 [Infographic]