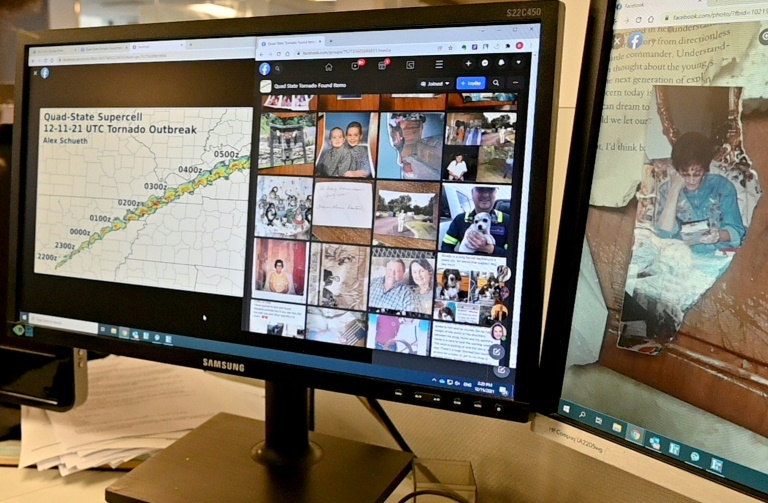 Abigail Miller’s parents lost practically all they owned in the weekend twisters that ravaged their small Kentucky town.

But with the help of strangers, they tracked down photographs of their daughter’s graduation — via social media groups which thousands are using to reconnect storm victims with cherished possessions strewn many miles away.

In preparation for a move, Miller’s parents had placed all their belongings in a storage unit in Dawson Springs, among the places hardest hit when tornadoes ripped homes apart across five US states last weekend.

The young pharmacy tech, who lives out of state, was relieved to hear they had evacuated ahead of the storm, but devastated to find out about their lost belongings.

“We didn’t expect to find anything,” said the 19-year-old.

But she soon noticed that an old schoolmate had shared a photo of her in a Facebook group called “Quad State Tornado Found Items.”

Then she got tagged in another photo in the group.

“Is this you?” commented the poster, Lisa Graham.

“Yes it is me and my parents,” Miller replied, “Thank you so much!”

The photos of Abigail Miller, with her parents at her high school graduation, had flown all the way to Philpot, Kentucky, almost an hour and a half away by car.

More of their photographs were found by others in Philpot, and each finder was more than willing to mail them back.

“Some even asked what our family needed for Christmas,” she said.

The “Quad State Tornado Found Items” group now has over 66,000 members, and is growing by the hour.

People are using the group to help reconnect lost pets, official documents, and hundreds of family photos — each item offering a glimpse into the lives upended by the tornadoes.

One shows a father in the year 2000, holding his newborn baby in hospital.

Another shows two men in tuxedos at a 1980s wedding.

The original owners are often identified within minutes through crowdsourcing, as family members and friends tag their loved ones in the comments section.

“That’s my memaw! I’ll message you!” Dani Runkel commented under a torn photo of her grandmother holding a Christmas present.

Other messages reveal the tragedy that has struck many families.

“This is my uncle who died in the tornado,” reads a comment below a torn yearbook photo.

“This is my grandmother,” a woman commented below an image of a 1998 funeral pamphlet. “It’s from my dad’s house that was destroyed in Princeton KY.”

Beyond family photos, tornado victims are also using online groups to reconnect with their pets.

Laura Pratt, a teacher in western Kentucky, was anxious when her husband called to say he had found a stray dog while helping a friend with storm clean-up — and was bringing it home.

“I’ve got a dog, I didn’t know how it would react. I also knew my son would fall in love with her,” said Pratt.

She knew for certain however that her husband did the right thing.

“That’s your family member. If my dog was missing, I’d want the same thing.”

Pratt’s dog had run away before, so she knew there were dedicated Facebook groups for finding missing pets.

She posted photos of the dog, a blind dachshund with a big brown spot on her head.

A few people reached out offering to buy the animal if its owner could not be found.

Three days later came a message from Shari Howard of Benton, another town in western Kentucky hit by tornadoes:

“This is my dog! My house and everything got destroyed! Where can I find her? Her name is Willow!”

When Pratt went to meet with her, she knew she had found the right person.

“As soon as the lady picked her up, she relaxed — you knew she was meant to be with her.”

On social media, “you see good in people, you see bad,” said Pratt.

But in the tornado aftermath, she takes pride in the number of strangers offering assistance online and organizing drives.

“It shows the strength of our community.”

Reddit says it has filed with SEC to go public