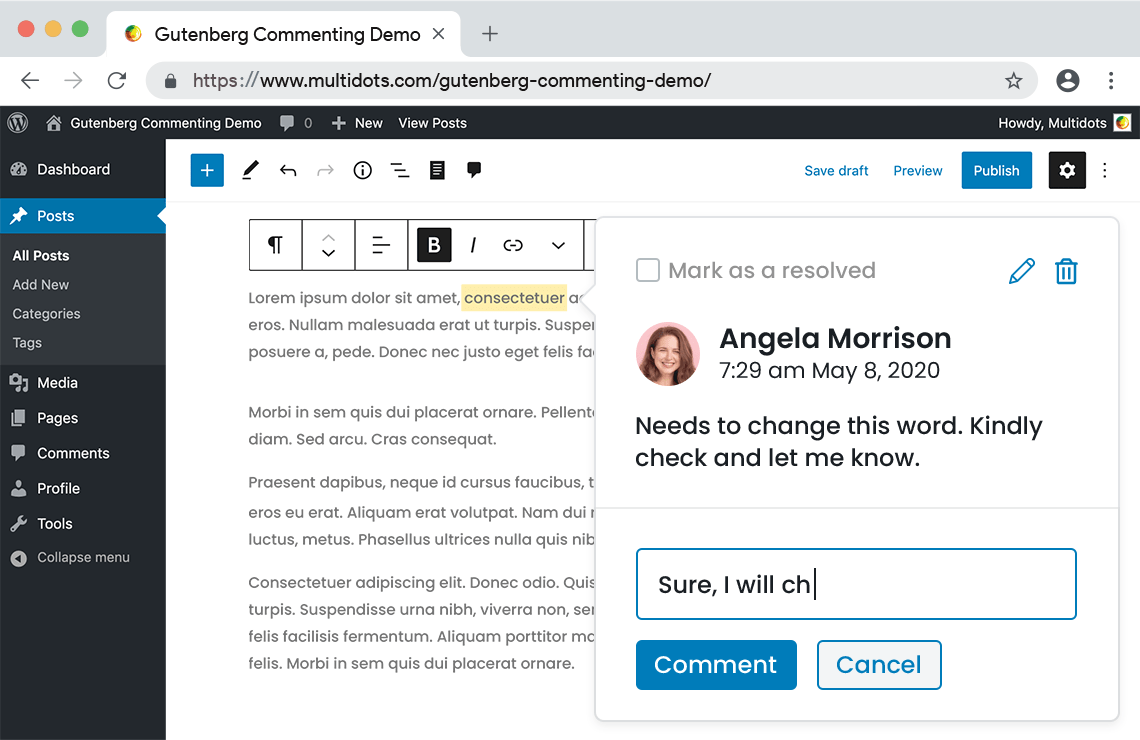 Multidots, a development agency and WordPress VIP Agency Partner, has released a plugin that brings content collaboration to the block editor. The Google-Doc Style Gutenberg Block Commenting plugin landed on WordPress.org in October and is just starting to gain traction.

It adds inline commenting to the editor where users can highlight text or select entire blocks and leave a comment. Other users can leave comments and/or mark the thread as resolved for a collaborative editing experience. Alternatively, the post author can use comments for making notes on sections that need to be improved or reviewed prior to publishing. The features support the following editorial workflow:

Multidots has a live demo set up where you can test leaving comments, replies, and marking threads as resolved. The plugin is currently compatible with a range of text-based blocks that are part of a page or post. Commenting can be accessed by highlighting text and then clicking on the dropdown arrow in the toolbar. Inline comments can be displayed or hidden via the icon in the top toolbar.

The plugin restricts adding and editing comments to Super Administrators, Administrators, and Editors. These user roles can edit their own comments but cannot edit or delete those added by other users.

Google-Doc Style Gutenberg Block Commenting could be useful for organizations where multiple teams need to review content before publishing. Not having the ability to collaborate using the block editor may even be a deal breaker for some teams that are considering WordPress. When collaborating on posts in the past I have often used Google Docs just for the ability to give inline comments with notifications. This plugin cuts many time-consuming steps out of that process, such as obtaining collaborators’ Gmail addresses, pasting the most recent version of the post into a document, and ultimately having to paste it all back into the editor.

The plugin’s authors consider this a beta version and plan to add more features based on community feedback. After testing it, I found that resolved threads seem to disappear, but it might be helpful to have a lasting record of them. Users cannot comment on images or other types of non-text-based blocks, and this seems somewhat limiting. There are no notifications for comments – only resolved threads, which makes it difficult to know when content needs further review.

Multidots is planning for the next release to be a more optimized version with enhanced commenting features, including the ability to leave popup suggestions for adding/removing certain text at a specific location and asynchronous commenting. Anyone interested in following the progress or contributing can find the project on GitHub.

Author:
Sarah Gooding is an Editorial Ninja at Audrey Capital. When not writing about WordPress, she enjoys baking, knitting, judging beer competitions and spending time with her Italian Greyhound.

WordPress 5.6 and PHP 8 Compatibility via @martinibuster

Experiment with a new look for your site with themes created to take advantage of Full Site Editing.

In case you missed it, we’ve been rolling out a new set of powerful site design tools called Full Site Editing (or “FSE”) and it’s now available for all WordPress.com users!

Don’t worry if you’re just hearing about Full Site Editing for the first time. We’ve been releasing these new tools in a way that doesn’t actually require you to do anything with your existing site(s). If you are up for a change though, we’re happy to announce the launch of a brand new family of themes made specifically with Full Site Editing features in mind. As of this writing we have over two dozen themes available that support Full Site Editing.

These new themes have been designed with a wide variety of sites cases in mind. But their potential stretches well beyond their screenshots and demo sites. Because each theme is fully editable in the Site Editor, every one of these themes can be heavily customized to fit your site’s needs. You can start with theme that features single minimalist homepage, and then add as many menus and sidebars as you wish. Or, you can start with a complex business theme and strip it down to something minimal to suit your vision.

The Site Editor also includes a new feature called “Global Styles,” which allows you to edit site-wide settings for color, typography, and more. You’re free to change your theme’s default color scheme to whatever fits your mood, or even make all site text larger or smaller in a couple of clicks. To kick off this new feature, we’re also providing a few pre-built variations on some of these new themes.

All the new themes and variations can be found in the Theme Showcase. Or, if you’re starting a fresh site, they’ll be offered to you automatically in the site creation flow. This collection of themes is just the beginning, and we’re excited to continue launching a variety of diverse theme options for you. What would you like to see in the next set of themes on WordPress.com?