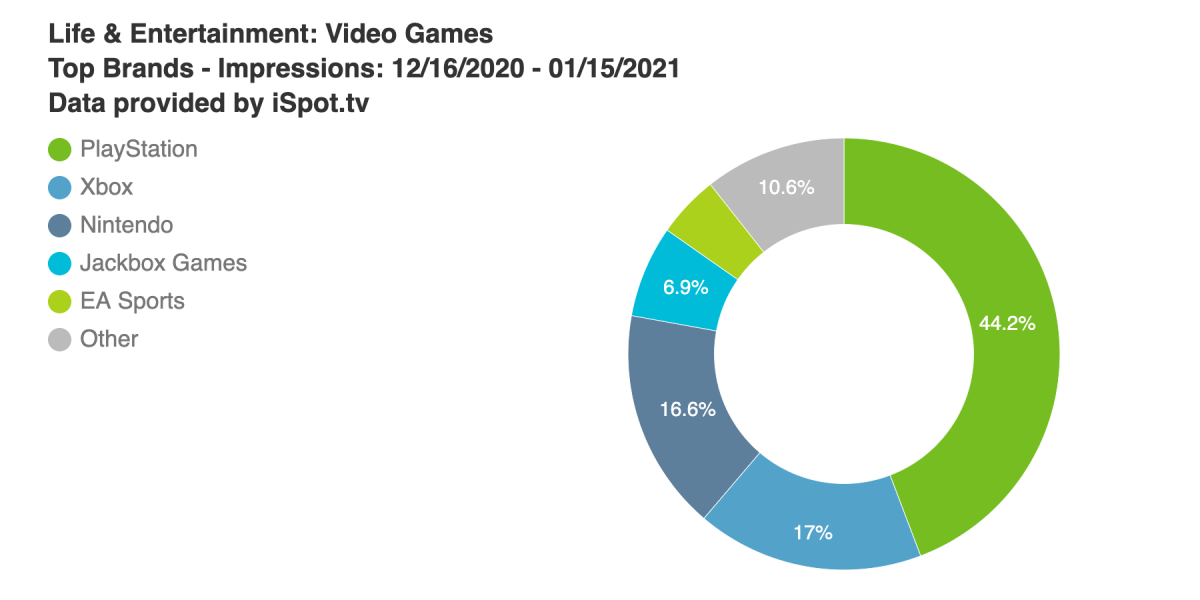 PlayStation has continued its domination of gaming industry TV advertising into the new year, racking up over 425.7 million ad impressions from mid-December to mid-January — 44% of the industry’s total.

Overall, 16 brands aired 51 spots more than 4,000 times during our measurement window, resulting in 962.7 million TV ad impressions. Once again, sports delivered top impression-counts. And it’s also worth noting the appearance of ranking-newcomer Jackbox Games, which debuts at No. 4.

GamesBeat has partnered with iSpot.tv, the always-on TV ad measurement and attribution company, to bring you a monthly report on TV advertising by the gaming industry. These are the ads, and by extension the games, that game marketers have been putting major muscle behind.

Below are the top five most-seen gaming industry TV advertisers from Dec. 16 through Jan. 15.

At No. 3: Nintendo, which generated 159.9 million TV ad impressions from 887 airings of 20 spots. With 28.7 million impressions, “My Way to Play: Minecraft Dungeons,” advertising the Switch, was the brand’s most-seen commercial. Notably, during the period measured, college football was the top programming driving impressions for Nintendo — a break from its usual family/kid-friendly focus. Other top shows included Big City Greens and SpongeBob SquarePants, while top networks included Disney Channel, ABC, and Nick.

Driving Game Growth & Into the Metaverse

With the release of A Plague Tale: Requiem coming October 18, whether you’re familiar with its sequel or new to the series, you may naturally wonder about what technology is in store for this new instalment. Luckily for our impatient, Plague-ready fighting spirits, Nicolas Bécavin from Asobo Studio accepted our invitation to talk about the subject, sharing some of his lead engine programmer’s insight on the game!

Xbox Series X|S are the only Xbox consoles Requiem will be released on. What is the reason for this choice?

We came to this decision early in the process, as we had a shared vision for Requiem; we wanted to create a next step in the adventure, a 2.0 experience, not just a re-enactment of the first game. So, we quickly came to the conclusion that we had to set ourselves free from old-gen constraints to take complete advantage of the new gen. The game’s scope has grown consistently wider this way, with more content and better life expectancy, and heightened game-specific features such as the rats and the environment, resulting in a much bigger game with a fresh feel.

All eyes are on the rats! We’ve seen a mind-boggling number of them in the extended gameplay trailer. Can you tell us more about this new generation of monstrous pests?

Rats are central to A Plague Tale, the horror of the game revolves around them, and we wanted to have that multiplied. The first major visual impact is the number of rats appearing on screen. It’s increased from 5,000 to 300,000. We’ve also reworked the aspect of the swarms they form; instead of creating whirls as in Innocence, their movement will appear as a giant wave, something like a tsunami of rats. Many sequences have been precomputed to best control this effect. They’ve also become more intelligent, they’ll move with more awareness of the environment, will know how to avoid light better. We owe a lot to our own, in-house engine, that we’ve been developing alongside our different projects, as it allows us to focus on such specific features, without having to rely on an external team.

What about character animation, how did your motion capture technique evolve?

Requiem introduces full motion capture to A Plague Tale. Innocence was already using body motion capture; we now have facial motion capture on top. A Plague Tale is a deeply moving tale about the cruelty of the world and it’s so meaningful to have an actress lend a human face to Amicia and communicate the many emotions she’s subject to throughout the game. So, we’re extremely happy to bring this new layer of emotion to the game.

Will there be other important visual enhancements?

The new gen allows for a much more immersive and dynamic visual environment. That includes enhanced draw distance, which contributes to the sense of openness which distinguishes Requiem from its prequel. There will also be a great deal of extra details thanks to the power of the GPU, from improved lighting to more detailed textures. So you can expect a far more vivid experience of the world of A Plague Tale!

Thanks to Nicolas Bécavin for taking the time to answer our questions! A Plague Tale: Requiem will release October 18 on Xbox Series X|S and PC. The game will also be available day one with Xbox Game Pass for Console, PC, and Cloud Gaming (Beta).