Amid the rising conflict in Ukraine, Russian-based cyber warfare groups are seeking to utilize social networks to sway public opinion, and increase the pressure on Ukrainian leadership – though thus far, these groups don’t appear to be gaining the traction that they might have hoped.

According to reports, various Russian misinformation and disinformation efforts have already been thwarted by quick action from the platforms themselves, as well as users aligned with Ukraine. And now, Meta, the owner of Facebook, has uncovered a new network of Russian-affiliated pages and profiles, which it’s blocked from exerting their influence on the broader narrative.

“In the last 48 hours, we uncovered a relatively small network of about 40 accounts, Pages and Groups on Facebook and Instagram. They were operated from Russia and Ukraine and targeted people in Ukraine across multiple social media platforms and through their own websites. We took down this operation, blocked their domains from being shared on our platform, and shared information with other tech platforms, researchers and governments.”

Meta says that the operation was relatively small, but growing, and that the group had been using these accounts to present themselves as independent news outlets, “publishing claims about the West betraying Ukraine and Ukraine being a failed state”.

Meta has also detected an increase in targeted email hacks, designed to gain access to the social media accounts of Ukrainian users, in order to post pro-Russia content on their behalf.

“We detected attempts to target people on Facebook to post YouTube videos portraying Ukrainian troops as weak and surrendering to Russia, including one video claiming to show Ukrainian soldiers coming out of a forest while flying a white flag of surrender.”

It’s interesting to see how Russian hackers are looking to utilize such tools to weaken the resolve of Ukrainian citizens, while also publishing counter-narratives about the motivations behind the invasion. The fail point, in many cases, seems to be that Russia hasn’t been able to provide a credible justification for the action – or at least, not one that’s catching on in the wider world. But again, it serves as a reminder of the impact and influence of social platforms, and how far we’ve come in regards to the way we interact, and our reliance on these apps as a key information source.

Which is why it’s important for Meta, and other platforms to do all that they can to address such, and thus far, it does seem like the lessons of the past are bearing fruit in this instance.

During previous events, social platforms have sought to maintain a distance, and to give users the freedom to express what they like, but the impact of major uprisings like the Capitol Riots in Washington, or the military coup in Myanmar, have reinforced the need for more vigilance on such, and to not wait until such discussions are out of hand before taking action.

Now, each platform is seemingly more prepared, and more on top of trends as they emerge, enabling faster action on such, reducing impact.

Again, it is a little different in this case, as it doesn’t seem like there’s a strong counter-narrative in support of Russia’s actions, but that may also be due to the increased action of platforms to limit the spread of such from taking hold.

Which, from a broader scope, could also raise questions about the capacity of social platforms to shape such narratives. But thus far, it does seem to be reducing the impact of misinformation within this latest global incident.

Advertisement
Related Topics:CoordinatedInitiativesMetamisinformationTargetingUkrainianUncoversusers
Up Next

How to Batch Create Your Social Media Content [Infographic] 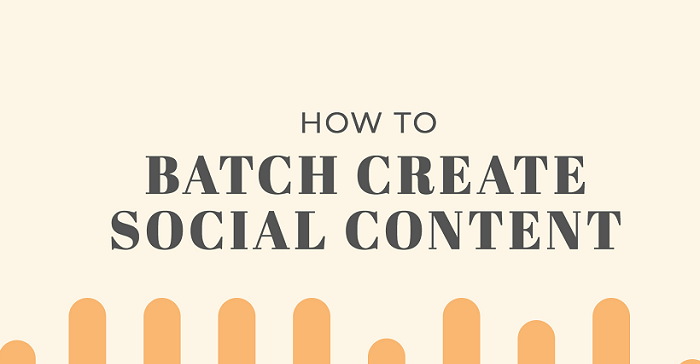 A key element of any effective social media marketing strategy is consistency, and posting at a regular enough rate to keep your audience engaged and interested in your brand and offerings.

But that’s generally easier said than done. Reading an advice post which says that you need to post every other day is one thing, but creating the actual content that’s required in order to align with that cadence is something else.

Because content creation takes time, time that small business owners, in particular, simply don’t have. At least, not regularly – which is why batch creation of your social posts, and scheduling them to go live throughout the week or month, can be a more effective way to maintain consistency, and tap into key events and opportunities.

Which is where this overview from the team at Giraffe Social Media may help. In the below graphic, the team from Giraffe has outlined a basic approach to batch content creation, which may seem obvious in many respects, but putting down a defined, set plan as to how you’re going to go about filling out your schedule can have big advantages.