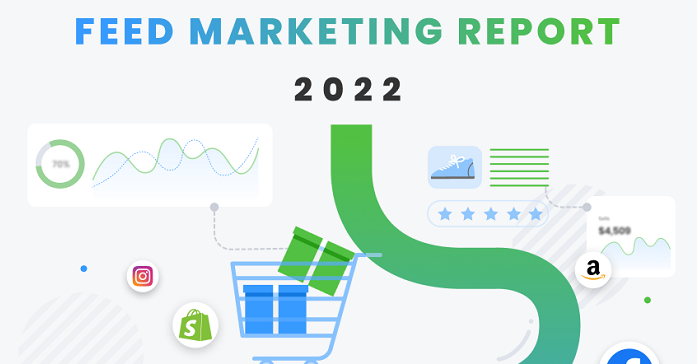 As more retailers look to eCommerce, and the opportunities of online shopping, it’s valuable to note the latest online store trends, to get a benchmark as to how your business is placed, and what the industry norms are in terms of product listings, advertising approaches, etc.

This new report from DataFeedWatch provides some perspective on this, based on analysis of over 15,000 shops in more than 60 regions.

As explained by DFW:

“The Feed Marketing Report 2022 has been created with one goal in mind: to provide every eCommerce marketer – a marketing agency professional, an in-house PPC specialist, an online store owner – with actionable insight into the very foundations of eCommerce campaigns.”

There’s a heap to take in, which could help you shape your eCommerce strategy.

You can download the full ‘Feed Marketing Report 2022’ here, or take a look at the infographic overview below.

Advertisement
Related Topics:ApproacheseCommerceinfographicKeyReportTrends
Up Next

Not entirely sure about this.

Today, Twitter has launched a public test of a new ‘Views’ count on some users’ tweets, which displays the total number of times that each of your tweets was seen in the app.

As you can see in this example, posted by @chimponsey, in the expanded tweet activity display, some users are now also seeing a ‘Views’ listing, alongside ‘Retweets’ and ‘Likes’.

The count is also indicated by an eye icon in the main tweet stream.

So, cool, right? Now, instead of thinking that people are seeing your tweets and not engaging with them, you’ll know for sure, which should do wonders for your self-esteem.

Technically, the feature doesn’t add anything new, in that you can already view your tweet impression count in the full tweet analytics display (accessible via the graph icon on your tweets).

‘Views’ and ‘Impressions’, of course, are not the exact same thing, but as confirmed by Twitter, this is the data that people seeing.

So why put it in the general info display, and confront people with that figure?

At a guess, I would assume that this is part of Twitter’s ongoing effort to demonstrate that it’s more popular and influential than its general usage numbers may suggest.

Twitter, for example, currently has 238 million monetizable daily active users, which puts it well behind Facebook (1.9b), Snapchat (347m) – basically, every other big social app has more users than Twitter, which has struggled to grow its audience over time.

But according to Twitter, this doesn’t tell the whole story, as many people are consuming tweet content regularly, despite not logging into the app. At one stage, Twitter pegged its ‘logged out’ monthly user count at 500 million, more than double its actual usage figure.

That’s a significant story for Twitter to tell, because it points to the broader influence of the app, which could make it a more valuable consideration for brands, thought leaders, creators, etc.

Maybe, by making tweet view counts more present, that will help to reiterate this – because maybe, even though your tweet only got 10 likes, 10,000 people actually saw it.

I mean, that still doesn’t seem like hugely helpful data to have from a self- confidence perspective. But maybe, by knowing that you are actually reaching a lot more people than the Like and retweet figures suggest, that will help you revise and refine your tweet approach to improve engagement and response.

Some users have also reported seeing profile view counts in the app as well, which falls into the same category, with profile view data also already available in your tweet analytics.

Maybe, by making these insights more front of mind, that could have a positive effect – or the negatives of such are minimal enough to justify a full test either way.

I guess, what Twitter really needs to know now is whether having this data more immediately available then reduces people’s propensity to tweet. If you’re seeing that a lot more people are viewing your tweets than you’d thought, because your other engagement stats are low, that could make you feel like you’re not great at tweeting, and see you share less as a result.

If that happens, Twitter will no doubt switch it back – but it could also, as noted, give users more context as to the true reach potential of the app.

Twitter has confirmed that the new view count display is currently being tested with a small group of users.