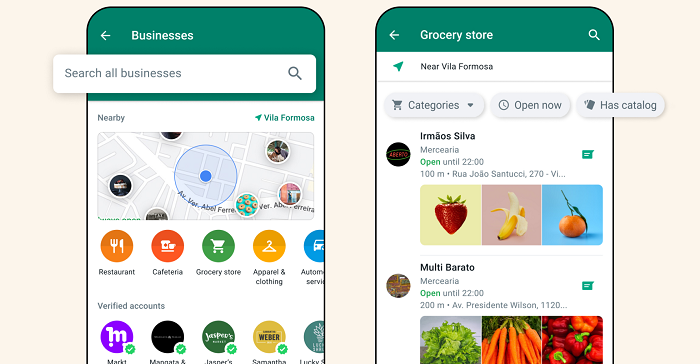 As social media engagement increasingly shifts to messages, Meta has already flagged its intentions to maximize the business opportunities in messaging, including Click-to-Message ads and other direct connection tools.

That push will also extend to WhatsApp, and facilitating more businesses in the world’s most popular messaging platform. And on that front, today, at the first-ever WhatsApp Business Summit in Brazil, Meta CEO Mark Zuckerberg has announced a new update that will enable WhatsApp users to search for businesses – by category or name – direct in the WhatsApp UI.

As you can see in this example, now, users will be able to search for businesses in a dedicated element, accessible via the search function in the app. The search function will include a mini-map so you can check out nearby businesses, along with category filters and verified business accounts, making it easier to access your various in-app shopping options.

“We’ve built business search in a way that preserves people’s privacy. What you search for is processed in a way that cannot be linked back to your account. To start, we’re bringing the ability to search for a business to Brazil, Indonesia, Mexico, and the UK where people can find companies using our WhatsApp Business Platform. In Brazil, search will help people find small businesses as well.”

That could provide a big boost for businesses looking to use WhatsApp as a connection tool – and with WhatsApp usage on the rise, particularly in the US, that could now be a much more important consideration.

Because as noted, people are sharing fewer updates to their social feeds, and more to private DM groups. Indeed, Zuckerberg says that social feeds are increasingly becoming discovery platforms, and with that in mind, it may be that users are now more open to engaging with brands in their DMs as well.

At the least, it’s likely worth adding WhatsApp as a connection option, and these new discovery elements, once fully rolled out, could also provide more impetus to establish a WhatsApp presence for your business.

In addition to this, Meta says that it’s also expanding WhatsApp payments.

“Ultimately we want people to be able to make a secure payment right from a chat with their credit or debit card. We recently launched this experience in India, and we’re excited to now be testing this in Brazil with multiple payment partners. This seamless checkout experience will be a game-changer for people and businesses looking to buy and sell on WhatsApp without having to go to a website, open another app or pay in person.”

India has quickly become a key region for Meta, with the developing market now home to more Facebook users than the US, while WhatsApp is used by over 550 million Indian consumers, and increasingly for business.

Meta’s hope is that it can evolve WhatsApp into an Indian version of WeChat, which is used for virtually everything in China, from messaging to commerce to paying bills. WhatsApp is already on this path, and the addition of more business discovery and payment tools will accelerate this, while also facilitating new opportunities in other regions.

Worth noting, too, that Brazil is the largest user market for WhatsApp outside of Asia, at close to 150 million users.

But again, while WhatsApp sees more usage in other markets, the broader growth of messaging has also seen it become a more significant platform in the US and Europe as well. In other words, the WhatsApp opportunity is growing, and it’s worth considering where it might fit in your brand strategy, as Meta looks to continue to build out its WhatsApp Business tools.

Will the BeReal process of posting an image of whatever you might be doing at a specific moment of the day end up becoming a lasting social media trend, or will it fade out, like many viral shifts before it?

It feels, in some ways, like it’s already waning – though BeReal did win App of the Year on both the Apple and Google (‘Users Choice’ category) stores for 2022. So there’s that – and overall, there is also a sense that BeReal has showcased an underlying trend in social, that people have had enough of the airbrushed, edited, sculpted personas that people present in their every upload and comment online.

It all feels a bit staged, and BeReal eliminates that, in a creative way. But what’s next for BeReal, as an app? Is there anything more that can be done with that concept?

Is there anything that other apps can do with it – and is it worthy of further exploration?

Instagram’s certainly giving it a shot.

After trying out a very BeReal-esque feature called ‘Candid’ earlier this year, Instagram is now also developing some similar features, focused on different elements within the app.

First off, Instagram’s working on something called ‘Roll Call’ which would enable group chat members to request that all participants add a photo or video of themselves to the chat within 5 minutes.

As you can see in these screenshots, posted by app researcher Alessandro Paluzzi, Roll Call is effectively a small-scale version of BeReal, within an enclosed group chat, as opposed to sending the request to all of your contacts.

Instagram’s also working on ‘Glimpse’ Stories, which works exactly like BeReal, in using the front and back cameras to show what you’re up to at any given time.

As you’ll note in both of these variations, they require participation, just like BeReal, with the images or videos posted only made visible to those who’ve also submitted their own contribution to the Roll Call/Glimpse.

Could that work, and become a more significant trend on IG, if indeed either feature is ever actually released?

Again, BeReal has seen a massive surge in downloads this year, so there’s clearly interest in such functionality, and really, the BeReal process is more of a feature than a platform in itself, so it could also make more sense as a complementary element within Instagram or some other app, than as a separate app of its own.

But it also feels like a bit of a fad that people will tire of – an antidote to the artificiality that now dominates the main apps, but which doesn’t actually change them, or the way we use the more popular apps, as such.

Which is the real challenge. While there is clearly a desire for more genuine, honest communication within social apps, the big platforms already play such a significant role in our daily process that it’s going to be difficult to usurp them, while it’s also hard to resist the entertainment value of TikTok for distraction and engagement, veering away from social connection.

How do you make the mundane more interesting, and a more significant aspect, when it’s more of a curiosity, a fleeting interest to make you feel more connected, but not a longer-term engagement element within itself?

The unfortunate truth that all social apps have eventually shown us is that we’re all pretty boring. Most of us don’t lead amazing, glamorous lives worthy of constant documentation, which is what’s eventually led to more people portraying enhanced versions of their existence to glean more likes and interest from others in this constructed digital engagement sphere.

That’s then gone even further, into image editing and blatant distortions of reality, in all respects, which has then led people to question more of what they’re seeing, while on another front, friends and family sharing their political opinions has forced us to see sides to them that we never knew, and in many cases, didn’t really need to find out about.

Which is what’s then set the scene for an app like BeReal to come in, and show us, in a relatable, human way, that we’re actually much more closely aligned than these increasingly false or distorted depictions may suggest.

That feels like the seed of a new shift, a new way of approaching social media interaction – but thus far, that’s as far as we’ve got. There’s just not much else you can do to build on that concept, and lean into that trend.

Maybe it’ll spark the next industry shift, and maybe it’ll be Instagram or TikTok or some other established app that will crack the code and find the best way forward on this front (I’d argue that Snapchat’s focus on connection among friends is most closely aligned with this shift, as a general app approach).

But right now, it feels like a limited element, a glimmer of what could be in amongst the broader social media cacophony.

Instagram might make more of a push to see what happens, but it may need something more to evolve this into a bigger element.