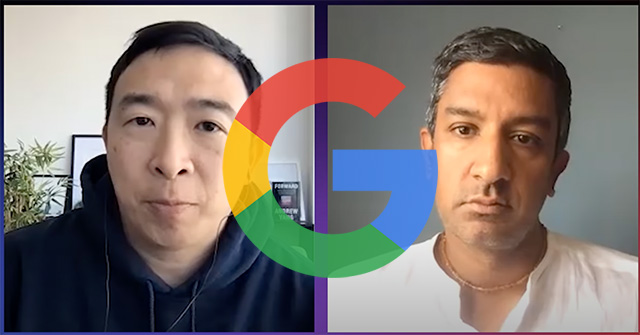 Danny Sullivan, the Google Search Liaison, responded to Andrew Yang, the businessman, attorney, lobbyist and political candidate and Ramesh Srinivasan, UCLA professor, that they are wrong on how Google Search works. It is actually shocking how wrong Ramesh Srinivasan is and how confident he was when describing it.

Here is the video clip that Andrew Yang, who most of you might recognize from his the 2020 Democratic Party presidential primaries, interview with Ramesh Srinivasan:

Why and how does Google show different people different search results? Now on https://t.co/PjWTwI77T1 Prof Ramesh Srinivasan @rameshmedia author of “Beyond the Valley” talks social media and democracy in the developing world, data rights, online echo chambers, and more. pic.twitter.com/PfcpOFkHwi

As you can hear, Ramesh saying “so when they [Google] started doing this personalization stuff, what happened is we became googled and we became googled not based on sort of a sort of some sort of neutral notion of relevance but based on what would grab our attention. And the way that works, which I think is really interesting, is it’s all based on correlation. So you know if you Andrew yang have looked at you know a million web pages and I have all this data about your engagement on those different web pages which we call documents in the information sciences and then I have very similar profile to you it will recommend content to me based on correlation mapping.”

So Danny Sullivan responded on Twitter to this saying “Our search results at Google are not personalized in the way that’s described. Two people searching for the same thing in the same location will largely see the same results.”

Our search results at Google are not personalized in the way that’s described. Two people searching for the same thing in the same location will largely see the same results. This explains more: https://t.co/dc0Qbjp8JL

We don’t have one single algorithm that runs. We’re pretty transparent about general things our systems aim for — our How Search Works site is a good place to start: https://t.co/O65v1PTehr and see especially https://t.co/OfHNBK6oHl

I’m sorry you found those results from that search in 2017 not useful. But the assumption you made in that article that the results were somehow uniquely tailored to your interests — that’s not how Search results are generated.

Yes, personalization, can mean many different things if we take the term outside of Google’s opaque definition of such. Location, language, etc. are all examples of a different level of personalization from one standpoint. But again the point made in the article stands.

Yes again that is how Google defines personalization but the term has a range of other meanings for the rest of us. I look fwd to hearing from your colleague/s so Google can communicate more clearly with the public on these issues.

There was a time in 2007 Google tried personalization in a deeper way but that didn’t last too long and Google discontinued it because they didn’t find it useful for search ranking purposes.

Here is a GIF I made from a video shared from Khushal Bherwani on Twitter of this in action:

Because here is the normal version of shopping ad for same query without any seperator and filters by brand name. pic.twitter.com/LjD57zRMe4

I just had a random Google search, and noticed these ads in Google SERP with Brand filter.
NB: DuckDuckGo is a search engine, not a rain coat brand. (As I mentioned just had a random search)@rustybrick pic.twitter.com/BMUEl6nn26

It is subtle, I am not sure that I dislike it or not.