Google shares a preview of new advertising features it will be announcing at Google Marketing Live on May 24.

These features represent what the Google Ads team has been working on during the first few months of 2022.

Advertisers can look forward to enhancing their marketing efforts with these upcoming additions to Google Ads.

All-new, mobile-first layouts for responsive display ads will be able to accommodate any portrait image or video asset.

The whole process of generating ads to fit different formats and device types is getting sped up with machine learning.

In a blog post, Google explains what machine learning will bring to responsive display ads:

“By using machine learning to speed up the design and iteration process, you can deliver engaging display ads faster than ever. Simply put, upload a few images, videos, and headlines, and we’ll automatically create and test visually striking ad combinations that fit millions of possible ad placements and, most importantly, deliver results.”

Google’s testing shows that advertisers see twice the conversions, on average, when adding a responsive display ad to an ad group with a static display ad.

An example of product ads with and without image uncropping is shown below:

This will be an automatic improvement, which means no manual changes required on the part of advertisers.

More information about the improvements coming to responsive display ads will be revealed at Google Marketing Live on May 24.

Available now, Google has developed a home on the web to seek inspiration for advertising creative.

Google has brought together some of the most successful creative assets from across Google Ads and showcased them in a new creative inspiration hub.

There you’ll see real-life examples of ads that worked for businesses across Discovery, Display, Apps, and YouTube campaigns.

Google hopes this will help you find ways to take your campaigns even further. 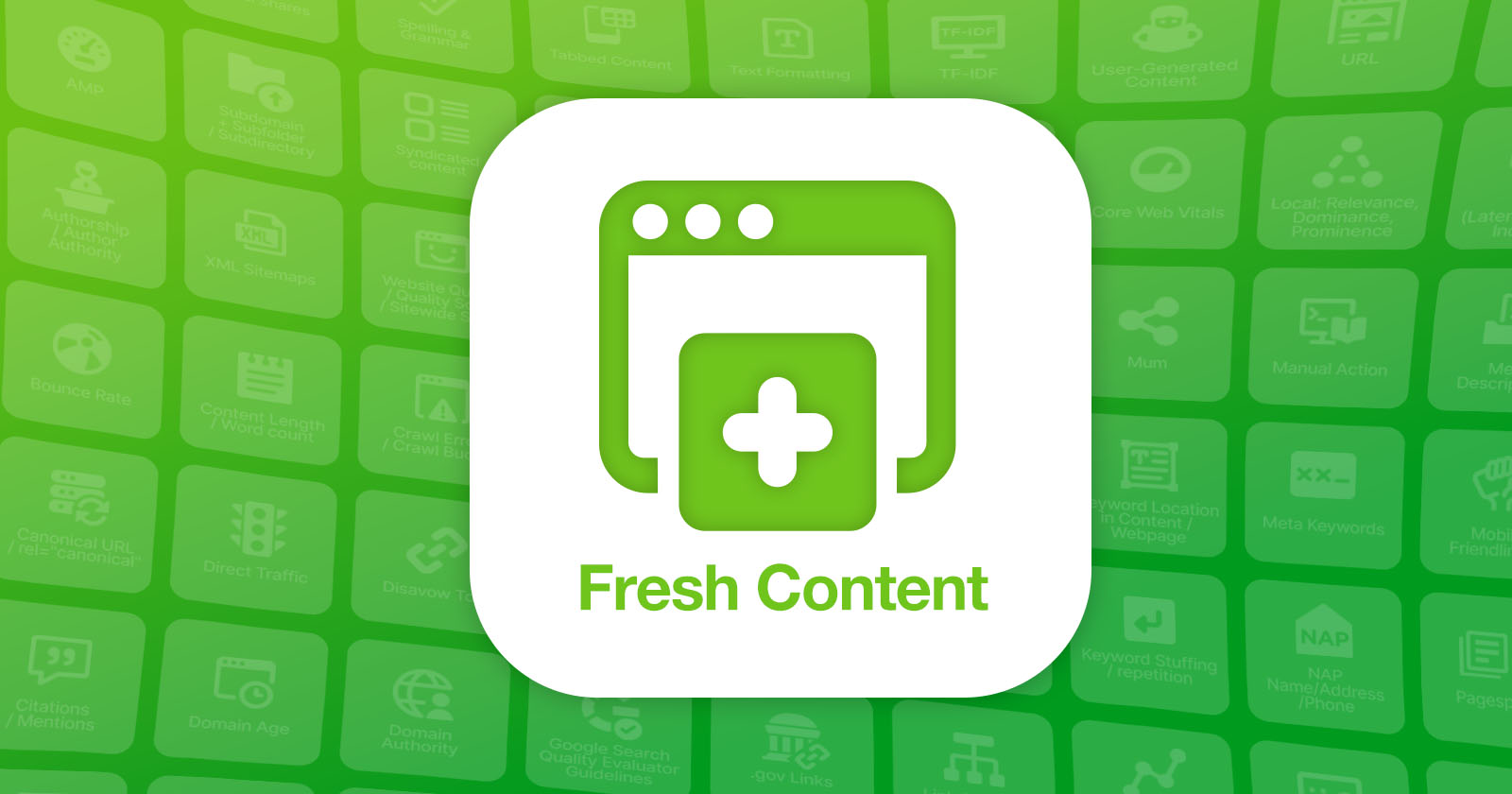 As with most updates in Google’s history, search industry rumors spread quickly about how to “game” the system.

“Freshness” is a common theme among Google updates, spanning over a decade.

And “fresh content” as a ranking factor has been an ongoing point of interest for SEOs, especially among content marketers.

To better understand the debate, we will look at Google’s “Freshness” updates, specifically what they mean and how (if at all) they affect search rankings.

The speculation that fresh content may be a ranking factor began in response to a few major Google updates and has snowballed into quite the claim.

The idea behind “fresh content” started a few years before Google’s Caffeine update.

In 2007, a New York Times reporter was allowed to spend a day with Amit Singhal (Senior VP of Search at the time).

During this time, Singhal spoke on the record about the solution he had developed to solve the “freshness problem.”

It was a new algorithm that tried to determine when users wanted new information and when they didn’t.

And like all Google initiatives, it had a catchy moniker: QDF for “query deserves freshness.”

If you think Google core updates are a big deal now, wait until you hear about the Google Caffeine update of 2009.

It was such a massive change that Google actually provided developers with a preview a few months before rolling it out.

In the announcement titled, “Giving you fresher, more recent search results,” Google explained that this was a significant improvement to the ranking algorithm and noticeably impacts six to 10% of searches.

Freshness updates did not stop there. Relevancy continues to be top of mind for Google as they seek to satisfy user queries.

Rumors on how to optimize for Google updates spread quickly, and this was undoubtedly true for fresh content.

Speculations circulated claiming that by updating content frequently, you could secure an SEO advantage or that updating the publication date of an article can make it look fresh.

Let’s take a look at the evidence behind these claims and whether fresh content is in any way a ranking factor.

For a deep dive into Google Ranking Factors, download the ebook now.

To decide if “fresh content” could be a ranking factor, we need to understand two things: what the “Freshness” algorithm updates mean and how they affect search rankings.

Google’s solution revolved around determining whether a search query is “hot,” meaning whether or not the user wants the most up-to-date information on the topic.

The mathematical model looked at news sites, blog posts, and Google’s own stream of billions of search queries to see how much global interest there is in a particular subject.

“When there is a blackout in New York, the first articles appear in 15 minutes; we get queries in two seconds,” Singhal told the New York Times.

Such a sudden spike in interest can signify that people are looking for new information.

Unfortunately, many people got the Caffeine update wrong.

Caffeine wasn’t a ranking update. The intention behind it wasn’t even to impact rankings. It was a complete rebuild of Google’s indexing system.

Indexing is when Google first looks at your content and adds it to its index. That means it has the potential to be ranked.

Ranking, however, is an entirely different story, with much more complex algorithms behind it.

And while Caffeine focused on indexing, it was the Freshness update that affected Google’s ranking algorithm.

The Freshness update was an effort to understand when a user is looking for more recent information.

But “freshness” doesn’t apply across the board to all search queries.

Google shares information on precisely which queries deserve freshness on its How Search Works page.

Google’s Freshness algorithm seeks to provide the latest information for trending keywords that fall under categories such as:

Freshness is a complex topic in its own right, so it’s a good idea to learn about it if you’re targeting time-focused queries.

Google Representatives On Freshness: Give Users The Respect They Deserve

Do we have an official answer? Yep.

In 2018, John Mueller replied to a question asking, does Google favor fresh content?

Mueller’s “no” reply has to be taken into context with the whole Twitter conversation.

User @anilthakur2u had made a joke about title tags updating on December 31 to become relevant for the upcoming year.

Mueller replied, “SEO hacks don’t make a site great. Give your content and users the respect they deserve.”

Just updating your publication date is a poor SEO strategy and won’t help you rank better.

Our Verdict: Fresh Content Is A Confirmed Ranking Factor For Some Queries

When the query demands it, fresh content is a Google ranking factor.

Does that mean you should constantly change the publish date? No.

Does it mean an article could outrank other pages because of the date they were published? Potentially, if Google thinks freshness is critical to the user’s query.

Please keep in mind there are a lot of ranking factors, not just “freshness.”

You may be able to win a ranking boost by riding the wave of popular trends, upcoming events, or breaking news, but it is not an evergreen content strategy.