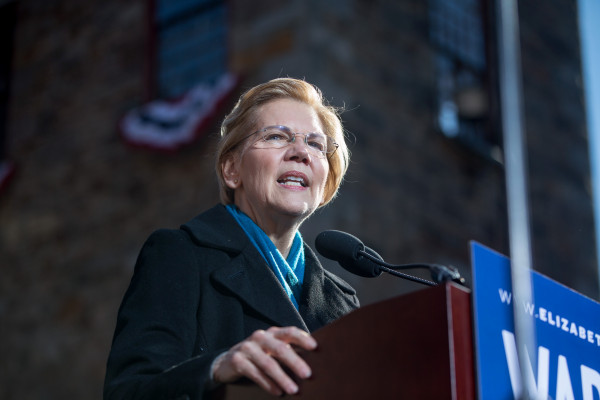 Presidential candidate Senator Elizabeth Warren has responded publicly to a leaked attack on her by Facebook CEO Mark Zuckerberg, saying she won’t be bullied out of taking big tech to task for anticompetitive practices.

Warren’s subtweeting of the Facebook founder follows a leak in which the Verge obtained two hours of audio from an internal Q&A session with Zuckerberg — publishing a series of snippets today.

In one snippet the Facebook leader can be heard opining on how Warren’s plan to break up big tech would “suck”.

“You have someone like Elizabeth Warren who thinks that the right answer is to break up the companies … if she gets elected president, then I would bet that we will have a legal challenge, and I would bet that we will win the legal challenge,” he can be heard saying. “Does that still suck for us? Yeah. I mean, I don’t want to have a major lawsuit against our own government. … But look, at the end of the day, if someone’s going to try to threaten something that existential, you go to the mat and you fight.”

Warren responded soon after publication with a pithy zinger, writing on Twitter: “What would really ‘suck’ is if we don’t fix a corrupt system that lets giant companies like Facebook engage in illegal anticompetitive practices, stomp on consumer privacy rights, and repeatedly fumble their responsibility to protect our democracy.”

What would really “suck” is if we don’t fix a corrupt system that lets giant companies like Facebook engage in illegal anticompetitive practices, stomp on consumer privacy rights, and repeatedly fumble their responsibility to protect our democracy. https://t.co/rI0v55KKAi

The Verge claims it did not obtain the leaked audio from Facebook’s PR machine. But in a public Facebook post following its publication of the audio snippets Zuckerberg links to their article — and doesn’t exactly sound mad to have what he calls his “unfiltered” views put right out there…

Whether the audio was leaked intentionally or not, as many commentators have been quick to point out — Warren principal among them — the fact that a company has gotten so vastly powerful it feels able to threaten to fight and defeat its own government should give pause for civilized thought.

Someone high up in Facebook’s PR department might want to pull Zuckerberg aside and make a major wincing gesture right in his face.

In another of the audio snippets Zuckerberg extends the threat — arguing that breaking up tech giants would threaten the integrity of elections.

“It’s just that breaking up these companies, whether it’s Facebook or Google or Amazon, is not actually going to solve the issues,” he is heard saying. “And, you know, it doesn’t make election interference less likely. It makes it more likely because now the companies can’t coordinate and work together.”

Elections such as the one Warren hopes to be running in as a US presidential candidate… so er… again this argument is a very strange one to be making when the critics you’re railing against are calling you an overbearing, oversized democracy-denting beast.

Zuckerberg’s remarks also contain the implied threat that a failure to properly police elections, by Facebook, could result in someone like Warren not actually getting elected in the first place.

Given, y’know, the vast power Facebook wields with its content-shaping algorithms which amplify narratives and shape public opinion at cheap, factory farm scale.

Reading between the lines, then, presidential hopefuls should be really careful what they say about important technology companies — or, er, else!

Zuckerberg claims that one particular candidate poses an existential threat to his company. Minutes later, he claims the size of that company lets it effectively police the integrity of the election in which she is running.

He thinks this is an argument *against* breaking it up.

Just a few short years ago Zuckerberg was the guy telling everyone that election interference via algorithmically amplified social media fakes was “a pretty crazy idea”.

For more on where Zuckerberg’s self-servingly circular logic leads, let’s refer to another of his public talking points: That only Facebook’s continued use of powerful, privacy-hostile AI technologies such as facial recognition can save Western society from a Chinese-style state dystopia in which the presence of your face broadcasts a social credit score for others to determine what you get to access.

This equally uncompelling piece of ‘Zuckerlogic’ sums to: ‘Don’t regulate our privacy hostile shit — or China will get to do worse shit before we can!’