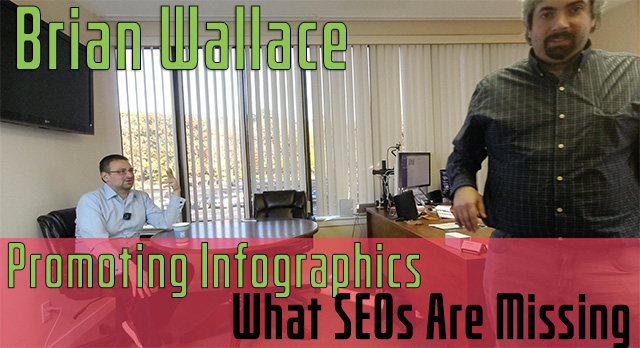 Brain said that they spend weeks and weeks on promoting the infographics. Brain explained a lot of people have an incomplete understanding how far a piece of content can go. There is a wide spectrum of outlets and organizations, both large companies and very niche organizations that can use the piece.

So the initial marketing is a couple of weeks but then you can likely repurpose that infographics, or pieces of that infographic in the future. This is the argument of timeliness versus evergreen content, and the evergreen content works forever and may spike in the future without you knowing. It depends on the client goals and the scope of the project.

Visual story telling is another name for infographics but it also applies to speeches, videos, VR, AR, etc. He said when it comes to infographics, PDFs seem to work way better than using AR or VR. We spoke a bit about this and also spoke about the conflict between data journalists and infographic artists. Making infographics interactive is something that makes him cringe because it can be anything.

What SEOs are Missing with Infographics:

Brain said some SEOs simply do not value design and when SEOs make their own infographics they cut short with the design. Brain said stick with your lane, do your SEO and hire someone who really knows infographics to do it.

Infographics in videos are often unnecessary he said, they can be amazing and cost a lot of money but are they worth it? He said it is about where to start, so make sure to start with PDFs and go from there. I discussed the YouTube channel The Infographic Show which I love because it is super educational and visual. Brain said it is super negative because it talks a lot about death, which is true – maybe that is why it like it. He also said not everyone is into videos and a lot of people like to scroll, which is probably why I personally stopped watching it.

We also briefly spoke about accessibility with infographics, he said they use alt text but they also will write out the blueprint in text on the page where the infographic is placed.

You can learn more about Brian Wallace @nowsourcing on social.

Google Ads Standard Shopping Campaigns Will Continued To Be Supported


Google has finished rolling out both the September core update and the September product reviews update but we still see some volatility today. Google’s John Mueller is offering to review your public presentations to make sure it is accurate. Google said if you don’t know if your content is expertly written, then it probably is not. Google said there is no percentage to measure duplicate content. Google is testing a new search feature to collect your recipes in a Google Cookbook. Oh, Search On is today, so I should have some news for tomorrow on that.